know, I know, everyone’s too busy to look at a video, but it’s 5 SECONDS! And you’ll love it. I told you gelato’s not just for summer! 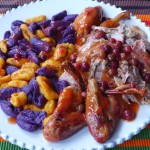 Nothing comforts more than these warm, plump nuggets of belly bliss when the frigid temperature sets in. It’s the season for tubers, and time for inventing new ways with the stalwart spuds.  Sweet potato gnocchi sparkle with color and brim with goodness, whether made with the traditional American orange-fleshed variety, or the exotic new Stokes purple that has turned up in some markets. For the details, see my latest article in Zester Daily. In the spirit of the season, I used both to accompany our holiday duck since orange is the ancient color of good fortune, while purple, symbol of peace and magic, has […more…]

Around this time of year the food press sounds its perennial advice on pumpkin pie, but what is usually overlooked are the endless dishes, both sweet and savory, that you can make using edible pumpkins and squashes. Probably no one reveres the pumpkin as much as the Italians, and the Venetians in particular, the subject of my most recent article for Zester Daily, “Why Venice Adores its Pumpkins.” Read about the Venetians’ love affair with zucca, and find my heirloom recipe for savory pumpkin or winter squash stew with tomato, dry-cured olives, and garlic. 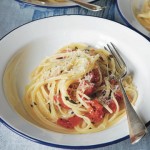 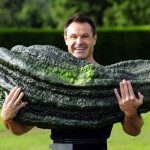 If making basil pesto is a rite of summer for you, you’ll want to check out my most recent stories on Zester Daily and NPR radio about the disappearing pine nut and substituting pistachios for pesto instead. As our planet warms, we’re losing our pine forests. Everyone I spoke to, from the American pine nut gatherers in the southwest dustbowl, to the pesto makers in Genoa who have relied on the Mediterranean fir forests for centuries, said the same thing: the nut-bearing conifers are an endangered species. It was a tough story to digest, but digest it I did. Because I write about food […more…] 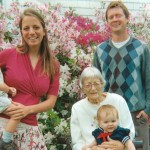 Every cookbook writer loves to hear from their readers and find out how they’re getting along with the recipes that are lovingly tested to make them foolproof before they’re published (but, hey! don’t expect the results promised if you go off and “do your own thing”). Here’s a message I got recently (what a treat—they even sent a photo!): Before my wife had given me your Classic Italian Cookbook, I had only nostalgia for the dishes I had tasted during my stay in Rome. Now I am able to re-create those same dishes in my own home, and I […more…] 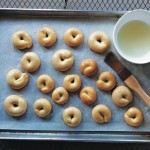 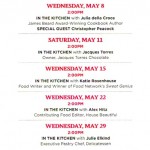 My formative years were spent not only cooking alongside my Italian mother and aunts, immersed in beautiful food, but also, studying art. I love design especially–interior, graphic and fashion design, architecture… all of it.  And so I feel excited to be teaming up with celebrated designer, Christopher Peacock, to kick off this year’s Kips Bay Decorator Show House, a quintessentially New York spectacle. Every year, the most acclaimed interior designers transform a grand Manhattan home into an exhibition of state-of-the- art interiors for the show. The idea was hatched in 1973 when several dedicated advocates of the Kips Bay Boys […more…] 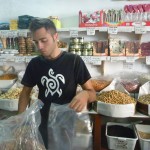 Last year nearly to the day, I wrote a post about A Day Cooking with the Duchess at the ancestral Lampedusa palace in Palermo, where I spent a weekend that was spectacular indeed. With so many photos to post there was no room for a recipe. Here, you’ll find a version of the Duchess’s pistachio pesto that I adapted for American kitchens. (And by the way, if you live anywhere near Westchester County, New York, the Jacob Burns Film Center in Pleasantville will be showing Luchino Visconti’s film adaptation of Il Gattopardo, The Leopard, in this year’s Italian Film Festival on May 19, […more…]