Last year nearly to the day, I wrote a post about A Day Cooking with the Duchess at the ancestral Lampedusa palace in Palermo, where I spent a weekend that was spectacular indeed. 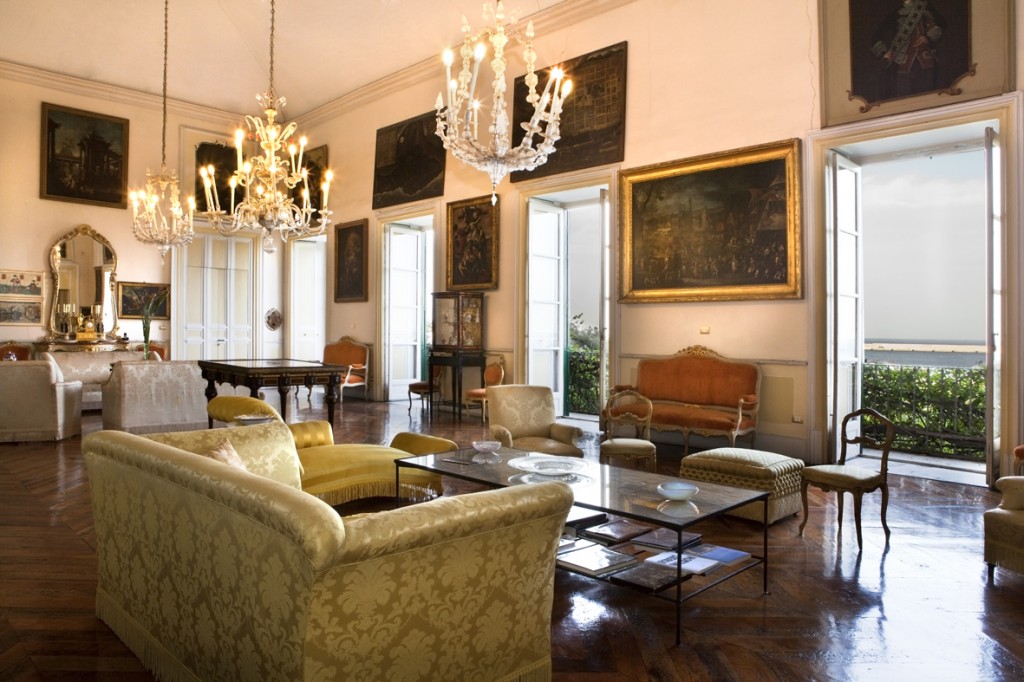 A sitting room in Palazzo Lanza Tomasi, Palermo, facing the sea. Photo courtesy of the Duchess of Palma

With so many photos to post there was no room for a recipe. Here, you’ll find a version of the Duchess’s pistachio pesto that I adapted for American kitchens.

(And by the way, if you live anywhere near Westchester County, New York, the Jacob Burns Film Center in Pleasantville will be showing Luchino Visconti’s film adaptation of Il Gattopardo, The Leopard, in this year’s Italian Film Festival on May 19, 20, and 22. Check their website soon for ticket information—and book early—tickets go quickly at this popular independent film theater—designed, incidentally, by my husband, architect Nathan Hoyt.)

From the Luchino Visconti film adaptation of The Leopard, with Burt Lancaster, Alain Delon, and Claudia Cardinale

My host, the Venetian-born Duchess, Nicoletta Polo, lived in New York for awhile with her husband, Gioacchino Lanza Tomasi, the cousin and adopted heir of Prince Giuseppe Tomasi di Lampedusa, author of The Leopard. (To clarify, the leopard is the emblem of Lampedusa’s own ancient family, and the author drew from his great-grandfather’s life in creating the protagonist, Prince Salina, the Leopard of the title). The couple and their young son made their way back to Palermo, arguably the jewel in the crown of all Mediterranean cities. There they rebuilt the magnificent 18th century palazzo by the sea that was Lampedusa’s last home. The character of Tancredi in Lampedusa’s novel was based on his beloved cousin and adopted son, Gioacchino Lanza. 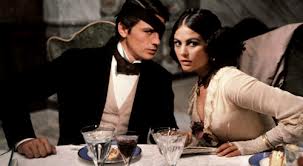 The character of Tancredi, played by Alain Delon in the film, was inspired by the novelist’s affection for his adopted son, Gioacchino Lanza Tomasi.

It’s hard not to imagine yourself in Giuseppe di Lampedusa’s world when you’re in the grand rooms of the palace, an era which Visconti, working with the heir himself during the production of the film, carefully recreated.

The famous scene at Prince Salina’s table, from the film, The Leopard.

While the palazzo is filled with reminders of the book—the Prince’s telescope, paintings of ancestor popes and family saints—all the windows face the terrace garden and the open sea beyond it, a metaphor, perhaps, for this family’s outlook on a vanishing civilization, Sicilian indiscretions, and the travails of modern Italy. 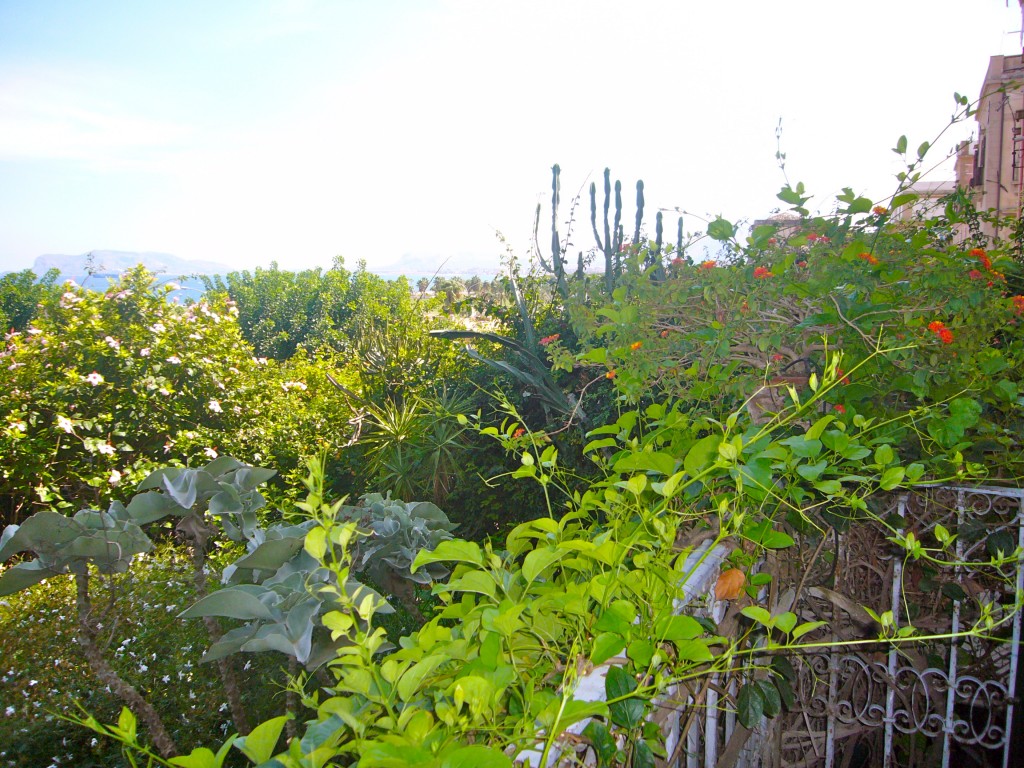 A view out to the sea from the Lanza Tomasi palace garden. Photo: Julia della Croce

A taxi driver who’d brought me to the palazzo had a more local outlook, gossiping that he’d heard that the Duchess made “foreign” dishes in her cooking school—from Naples, and Venice, for example—proof enough that even after Garibaldi disembarked with his Redshirts at Marsala in 1860, the battle  for a unified Italy was never fully won.

The recipes on the Duchess’s menu, with their emphasis on pistachios, are typical of the local cooking. When we shopped for the pistachios, we sought out the D.O.P. variety from the medieval town of Bronte at the foot of Mount Etna. The particular type of pistachio tree the area is famous for, springs from the lava rock of storied Mount Etna and nowhere else. Considered to have no equal in flavor anywhere in the world, the pistachios were for sale at a shop near the palazzo.

The pistachio vendor around the corner from Palazzo Lanza Tomasi

For the pesto and the crostini toppings, the olive oil the Duchess used was, needless to say, the sun-struck local variety, fragrant and floral, seemingly concocted by the gods of Etna just for this marriage with the Bronte pistachios. Without them, I couldn’t quite reproduce Nicoletta Polo’s Sicilian pesto in my New York kitchen. 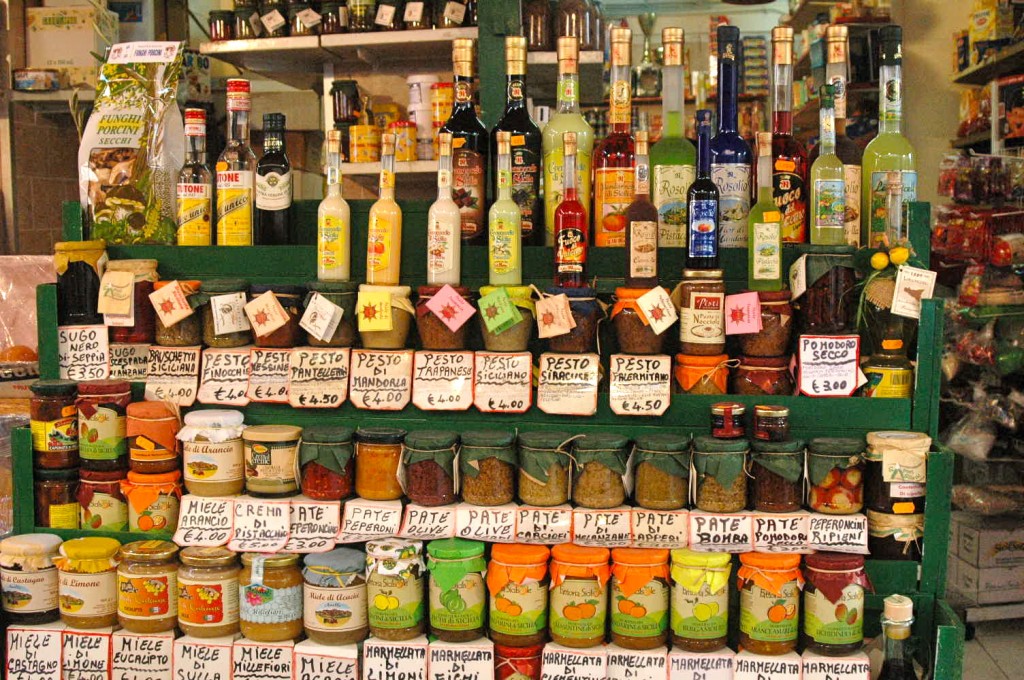 The Sicilians are masters of pesto. At the Capo market in Palermo, a plethora of pestos. Photo: Julia della Croce

Instead, I used whole pistachios bought in my local market. I shelled, peeled, and toasted them lightly; added a few almonds like they do in Bronte, upped the amount of basil and parsley the Duchess used, and eccola! (“so here it is!”)—a very fine pistachio pesto was made. 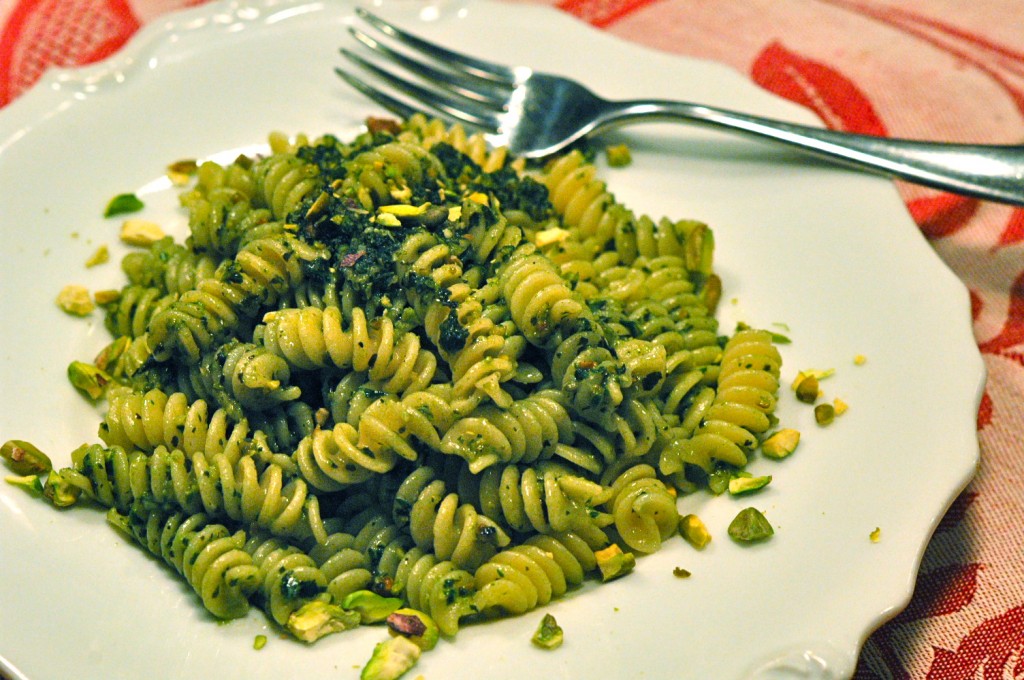 Use this delicate pesto with fresh ribbon-type egg pasta, home-made potato gnocchi, or with short macaroni cuts such as fusilli, as the Duchess does. The coils of the fusilli trap the pesto nicely for an excellent ratio of sauce and pasta-surface. Mind that when saucing the pasta, you must blend a few tablespoons of the pasta cooking water with the pesto to loosen it up for an even coating. You can also use pistachio pesto as a condiment for grilled fish, stir a teaspoonful into a bowl of vegetable soup, or add a dollop to a batch of pureed potatoes for a big flavor boost.

Note: If the membrane of the pistachios don’t peel off easily after rubbing them with your fingers, blanch them in boiling water for about 1 minute. Drain, shock in cold water, and dry the nuts in a paper towel. Toast them lightly and when they cool, peel off any skins that haven’t come off.

In a food processor, combine the pistachios, almonds (and/or pine nuts), basil, parsley, olive oil, salt, and pepper. Process, pulsing every few seconds, to grind the ingredients to a grainy consistency. Take care not to over-grind to avoid a paste-like result. Use a rubber spatula to transfer the pesto to a small mixing bowl. Fold in the grated cheese. Press plastic wrap directly on the surface of the pesto until you are ready to use it. For best results, use it within several hours of preparing.

Ahead-of-time note: I am not a big fan of freezing pesto of any kind, but if you need to make it in advance, leave out the grated cheese until you are ready to use the pesto. Immediately after making the pesto, keep the surface well-protected with plastic wrap, as described in the recipe. The pesto can be kept in the refrigerator  for up to two days. Freshly grate and blend in the grated cheese just before using.

Thanks to Nicoletta Polo and Gioacchino Lanza Tomasi, and with gratitude to Gemmellaro Pistachio Products, the Bronte Insieme and Naturalmente Italiano websites, Pistachio between History and  Kitchen, by Irene Faro, and  “I Mille Menu” (F.lli Fabbri Editori, 1972).

4 Responses to “Pistachio Pesto: A Sauce Fit for a Prince”