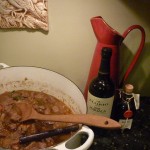 And for which I promised a recipe in a recent post (December 15). Just the remedy for February’s chill.  Go to RECIPE> After I finished off producer Piero Catalano’s bottle of Suavis, the aged vinegar from Sicily’s desert island (“The Other Face of Balsamic” [December 15 post]), a small flask of Modena aged balsamic vinegar took its place in my cupboard. Unlike the Suavis, a souvenir from my September in Trapani (I drank it as a cordial, an “amen” to the day, blissful thimbleful by thimbleful and it was gone by January), aged Modena balsamico can be more easily replaced. […more…]