Along with Nancy, I’ve traveled those byways. Here’s my book about Umbria (Chronicle Books, 2003)

Many a tourist has been hustled along the deep-rutted routes of Venice-Florence-Rome-home, yet some travelers got off the highways and criss-crossed the countryside, writing about the cities, small towns and byways. One such traveler is former New York Times staff writer, Zester Daily contributor, author, and Tuscany resident, Nancy Harmon Jenkins, who has savored Italy with great learning and a deep and abiding love.

Today, previously overlooked regions that she has captured masterfully in her writings are popular destinations for the American traveler interested in the glorious food of Italy, and there is hardly a better guide. Nancy has announced two upcoming tours to Puglia for this year in October and November that will take you away from the predictable tourist routes. Called AmorOlio, “in love with olive oil,” they  will immerse you in the ancient olive oil lands of the region.

We’ll gaze on groves of monumental centuries-old olive trees and taste magnificent oils from coratina, ogliarola and other local cultivars; we’ll learn how oil used to be produced (under ground!) and how the best modern practices create fine oils characteristic of the region today….Because Puglia is also a granary for high-quality hard durum wheat, we’ll visit one of Italy’s premium pasta producers and we’ll learn from a master chef how to make traditional pastas by hand…. We’ll taste wines from deep dark primitive … to fresh flowery whites from Locorotondo, we’ll dine in trulli, the white-stone domed architecture so typical of the region, and in al fresco seafood restaurants along the Adriatic coast….

A third culinary tour, organized in Umbria for May, is led by Nancy’s daughter, award-winning restaurateur, porchetta expert, and cookbook author Chef Sara Jenkins. Sara calls the tour Porchettiamo, “an intimate exploration of porchetta and all things porky.” Judging from her stellar New York restaurant, Porsena, and her intimate knowledge of the region’s food, it promises to be a splendid journey:

… explore some of the off the beaten path towns, wineries and eclectic cooks as well as spending the day at the Porchettiamo festival in the medieval town of San Tereziano tasting various porchetta stands, drinking sagrantino wine, visiting wineries and an historic brewery in fabulous Perugia.  … porchetta making workshop as well hands on cooking class … dine and stroll exploring enotecas and simple trattorias … pottery shops and …antique paper making atelier …  meet and sample with some of the areas finest norcini and salumi makers …  May in Umbria is heaven as the fields are alive with wildflowers, the sun is warm but not yet too hot and the days are long. 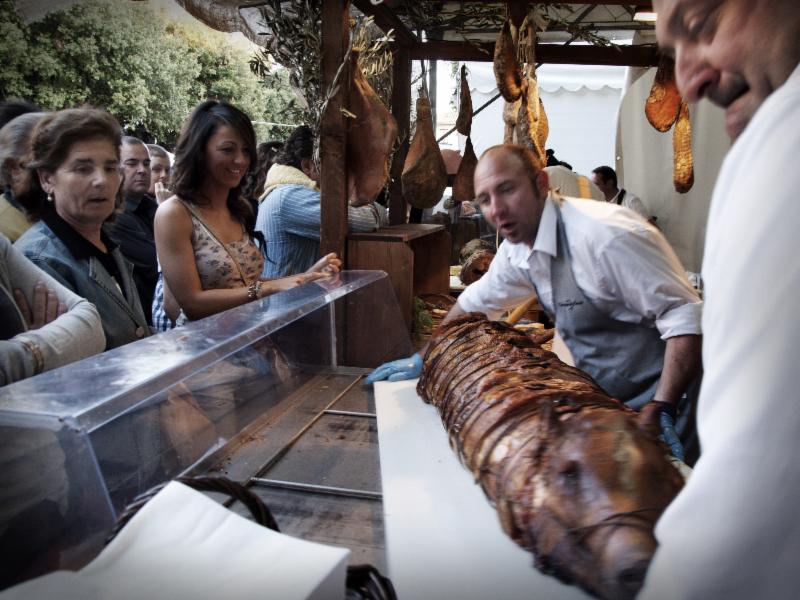 In my view, spring and autumn are the best times to see these achingly beautiful regions, not to mention opportunities for eating unequalled early- and late-harvest foods the likes of which, I believe,  you’ll never taste here. Better hurry and read the details—there is still some room left in both tours. If you go, safe—and delicious—travels!