Spaghetti with tomato sauce are the dream of Italian cuisine, a magic mix of ingredients, wisdom and history that a very few other dishes in the world have. Unfortunately this dish is manipulated, tormented and crucified almost everywhere. 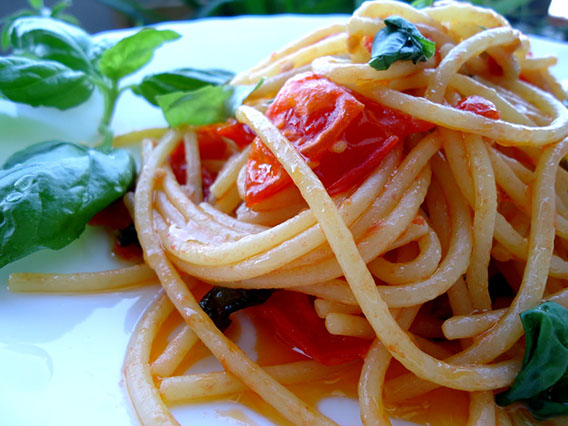 Once every year, Rosario Scarpato, Neapolitan-born gastronome, writer, film maker/director, and commander-in-chief of ItChefs-GVCI (Virtual Organization of  Italian Chefs) makes a global appeal for the preservation of authentic Italian food by live video conference from the amphitheater of the International Culinary Center (ICC) in New York City, reaching 2,000 Italian chefs in 70 countries. “People all over the world are cooking Italian cuisine and yet they are not cooking Italian cuisine,” he says. “Today,” he implores,”the future of Italian cuisine is with the people in this room,” referring to the phalanx of chefs who are his followers and all who will hear him.

Rosario Scarpato, impassioned advocate for the preservation of traditional Italian food, and mastermind of the International Day of Italian Cuisine at ICC in New York.
Credit: Julia della Croce

The International Day of Italian Cuisine (IDIC) always takes place on January 17, says Rosario, because it’s the feast day Saint Anthony Abbate (Anthony the Abbot), patron saint of butchers, farmers, gravediggers, small animals, and basket makers. It is also the first day of carnevale, one day out of 365 when, according to ancient custom, licit insanire, “anything goes.” The IDIC dish of 2014 is spaghetti al pomodoro con basilico, “Spaghetti with Tomato Sauce and Basil,” probably one of the world’s most beloved of all Italian dishes–and one of the most misunderstood. 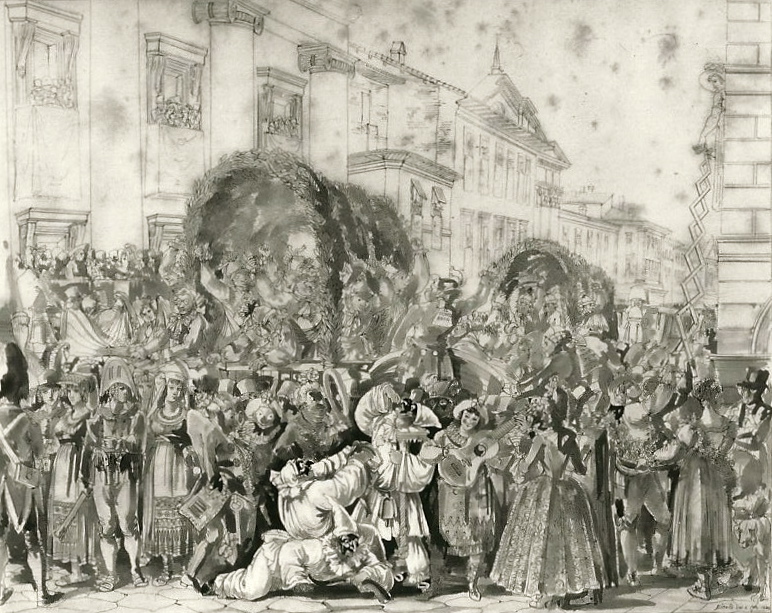 Accordingly, the maccheroni mayhem began. A trio of three acclaimed Italian chefs, Matteo Bergamini (SD26 in NYC), Enrico Bartolini (Michelin-starred Master Chef, Devero Ristorante, Milano), and Luca Signoretti (Roberto’s Restaurant, Dubai) demonstrated the proper ingredients and preparation of the dish from the amphitheater, a performance that was broadcast worldwide. While the chefs were not allowed to deviate from the official recipe, each could use their own signature “tricks” to make the sauce and cook the spaghetti. At the same time, armed with pots, colanders, spoons, and saucepans, the virtual troops descended upon their patrons in restaurants and home kitchens from Thailand to London, Hong Kong and Dubai, to serve up the true version according to the IDIC official recipe. 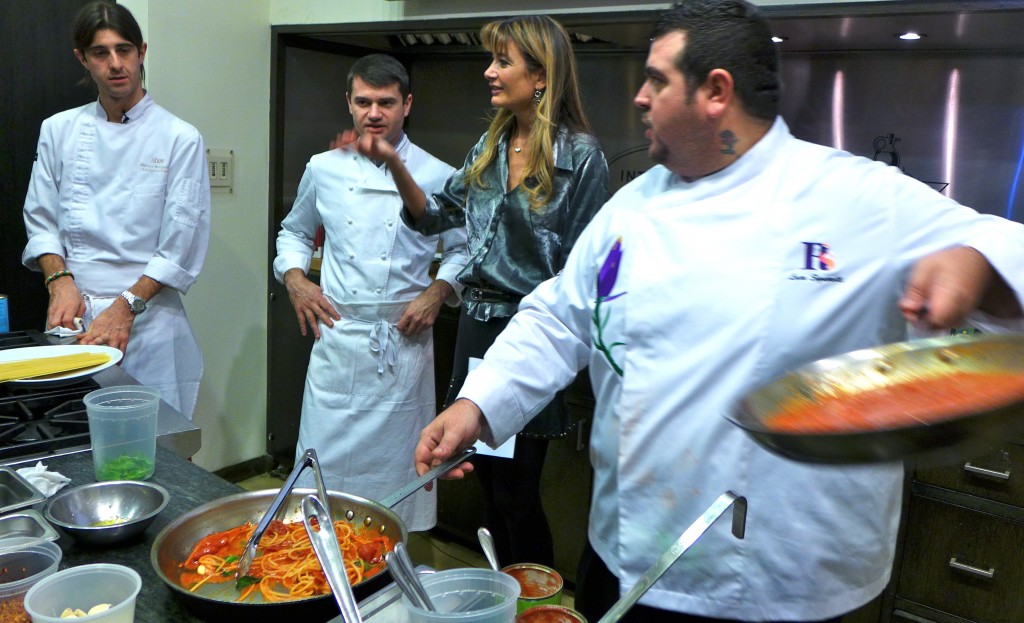 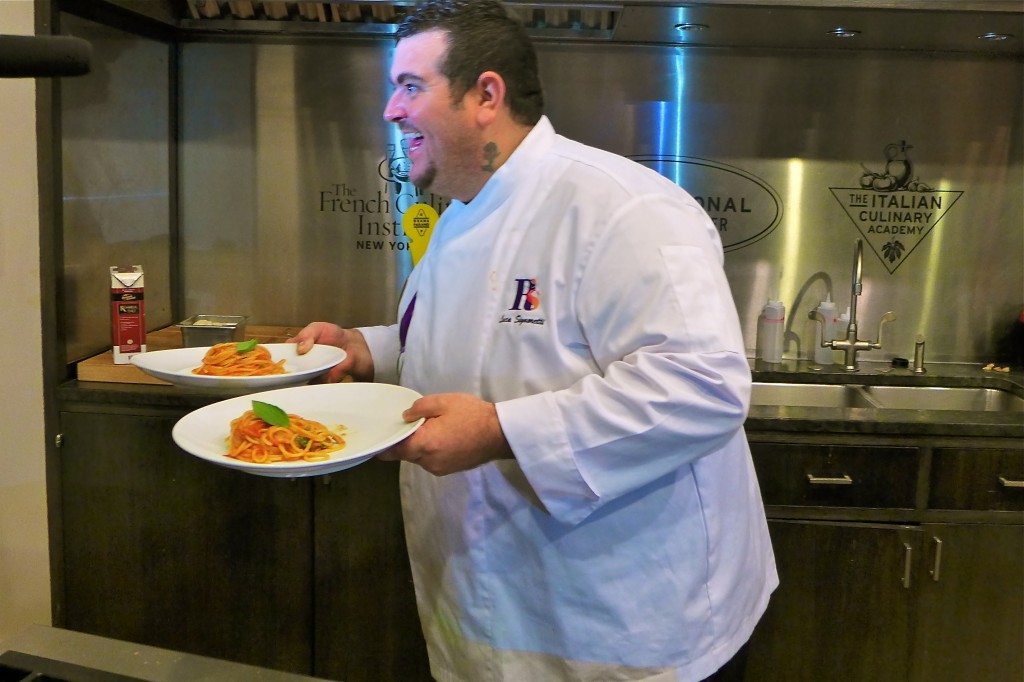 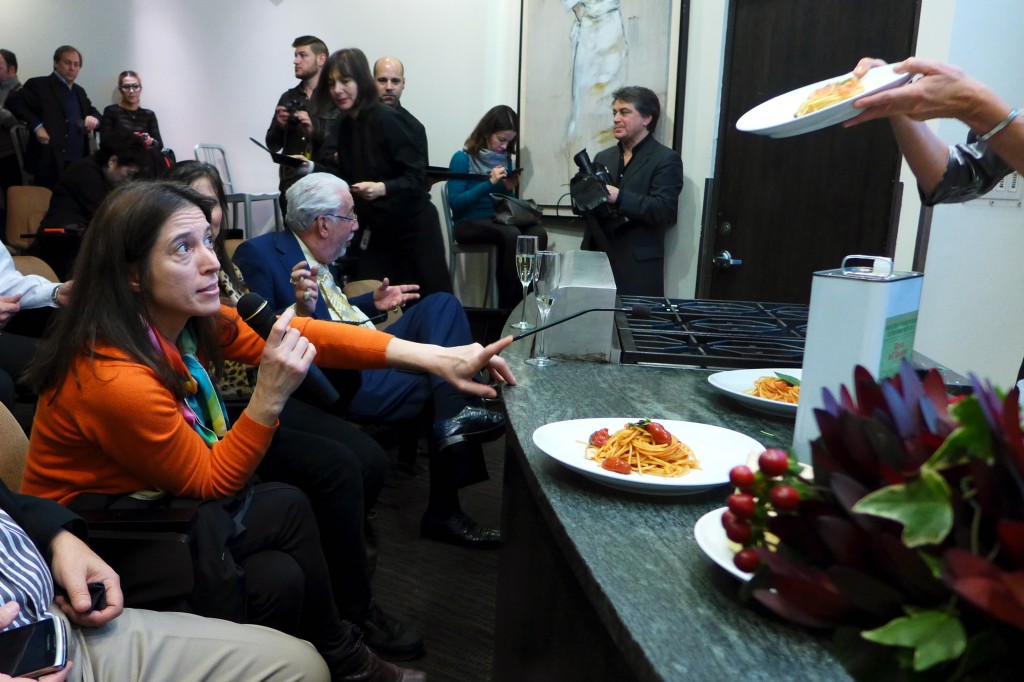 Odette Fada, former San Domenico (NYC) chef, asks the trio what their position is on adding oil to the cooking water, just for the record. Their answer, in unison, a resounding “No!” 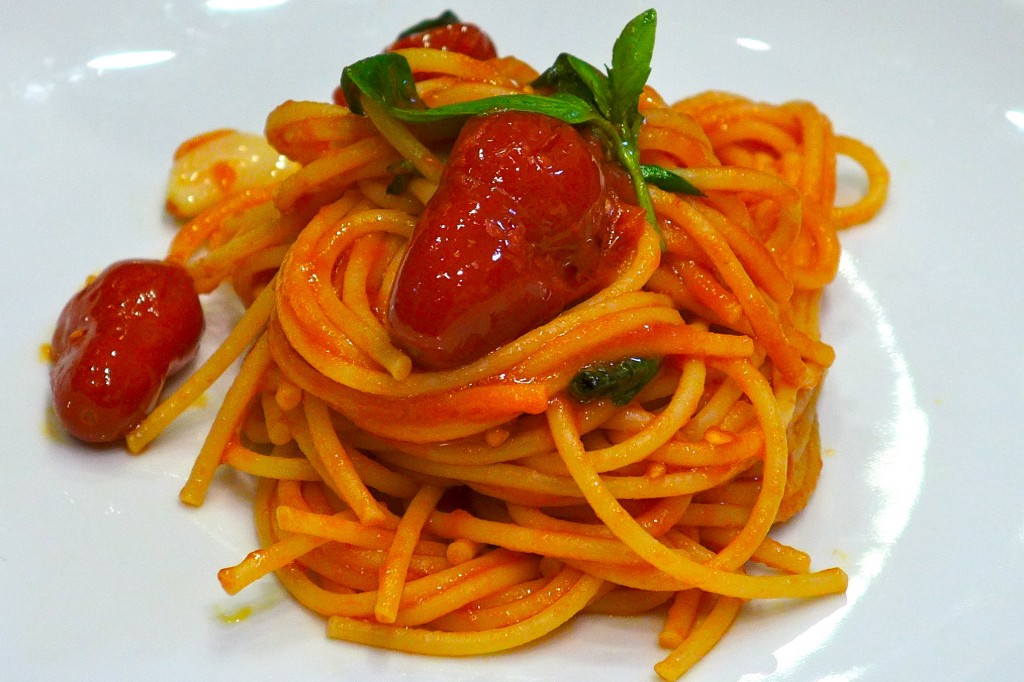 Besides spaghetti al pomodoro con basilico, the dishes that have so far been studied, dissected, celebrated, and commemorated at the International Day of Italian Cuisines are, spaghetti alla carbonara (2008), risotto alla milanese (2009), tagliatelle al ragù bolognese (2010), pesto alla genovese (2011), ossobuco in gremolata alla milanese (2012), tiramisù  (2013). If you are one of those people who just can’t figure out why the Italians are so dogmatic about these things (think Marcella Hazan) you might just change your mind once you try the real thing. And when you eat authentic spaghetti al pomodoro con basilico, it will be a revelation. “It is not only an Italian recipe, it is an Italian lifestyle,” Rosario says. “Sophia Loren, wherever she goes in the world, brings her ingredients with her and cooks [tomato sauce] in her hotel room over a burner.” 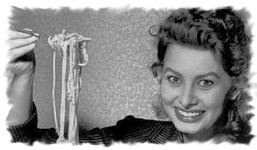 I look forward to the IDIC event every year because in the company of this crowd, I always learn something I didn’t know before–from Chef Matteo Bergamini, it was how to make a truly great, tomato sauce in two minutes (the secret is in the tomatoes). You might ask, “why worship at the alter of  spaghetti with tomato sauce and basil in winter?” Because, says Chef Cesare Casella, Dean of Italian Studies at ICC, “You make the best [tomato sauce] with canned tomatoes from Italy, and you can eat it all year round.” 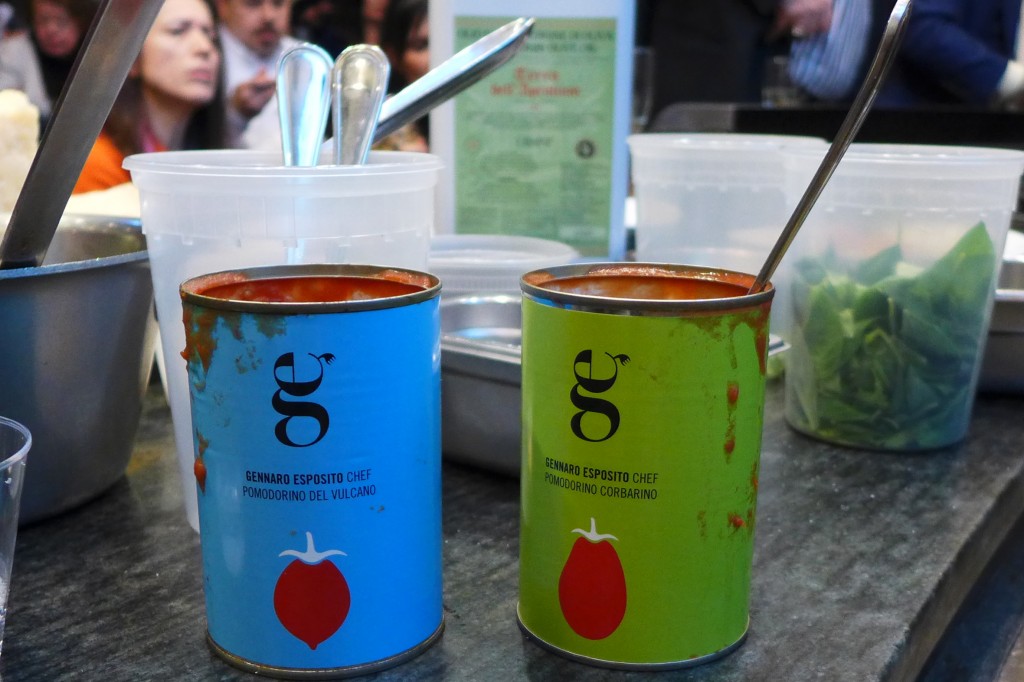 While the New York conference was underway, Italian food and wine writer Luciano Pignaturo, alongside chefs in Pompeii (Naples), a stone’s throw from the archeological site and cradle of maccheroni culture, were on live video in the amphitheater, cooking spaghetti al pomodoro con basilico from the kitchen at the Ristorante President using different kinds of tomatoes and showing his tricks for mastering the art. It is also the region from whose mineral-rich volcanic dirt the first Italian tomato was spawned, and that produces the San Marzano varieties essential to a proper spaghetti al pomodoro con basilico. 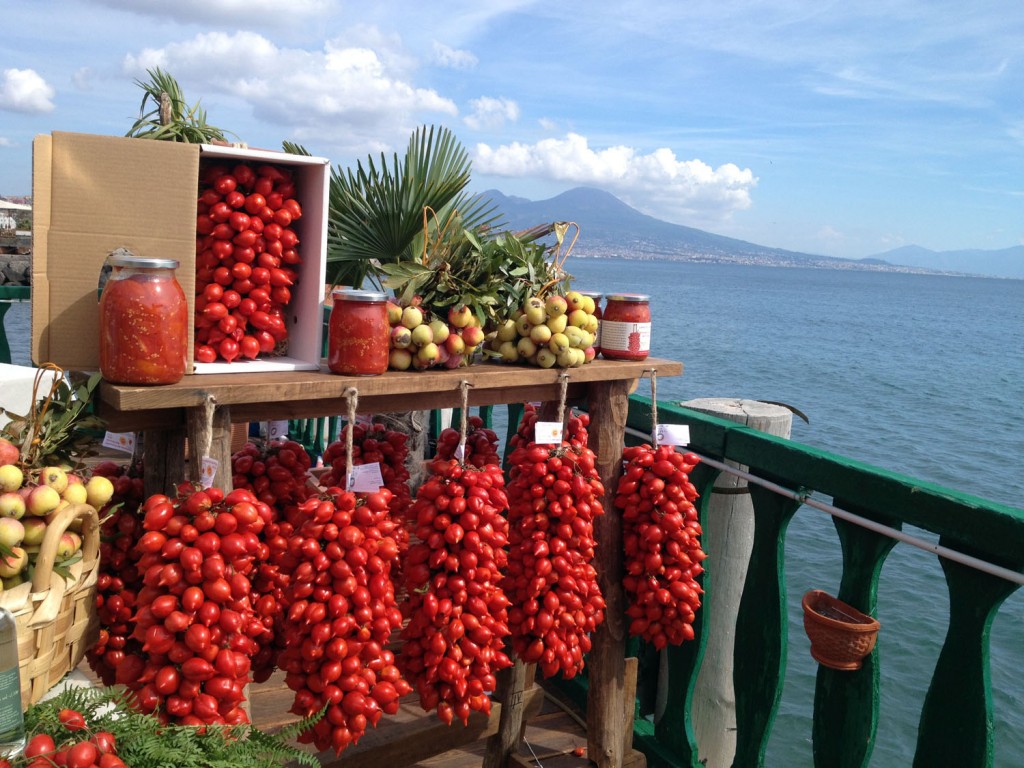 Intensely sweet and “minerally” from the nutrients in the volcanic soil, pomodorini del Piennolo (from appendere, “to hang”), grow in the heart of the San Marzano district of Vesuvius/Naples. They’re picked in clusters and hung in bunches until ready for use, keeping throughout the winter. Credit: www.casabarone.it

Chef Matteo sautés his favorites, the Piennolo, in the olive oil for no more two minutes to “keep their clear flavor,” adding a touch of crushed chili pepper to the oil as it warms. 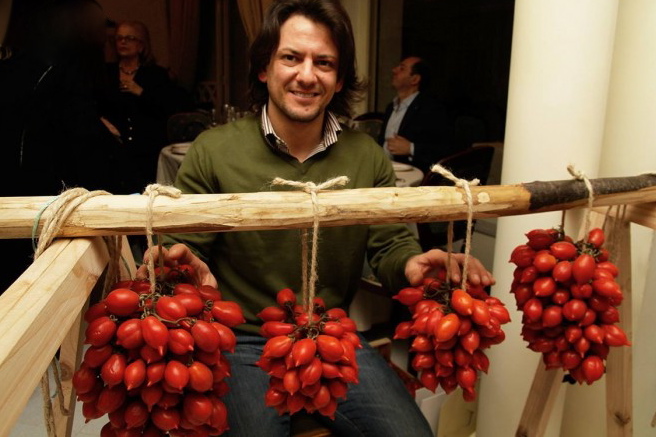 Piennolo DOP tomatoes are picked in clusters and hung for several months in the sun.
Courtesy: Ristorante “President,” Pompeii (Naples) 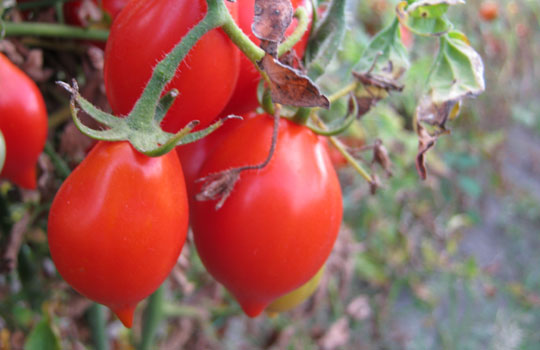 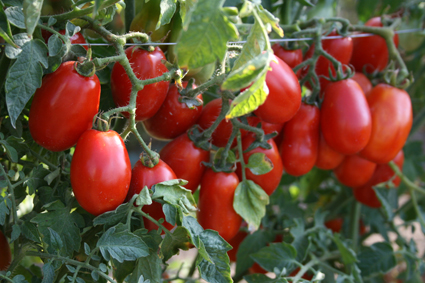 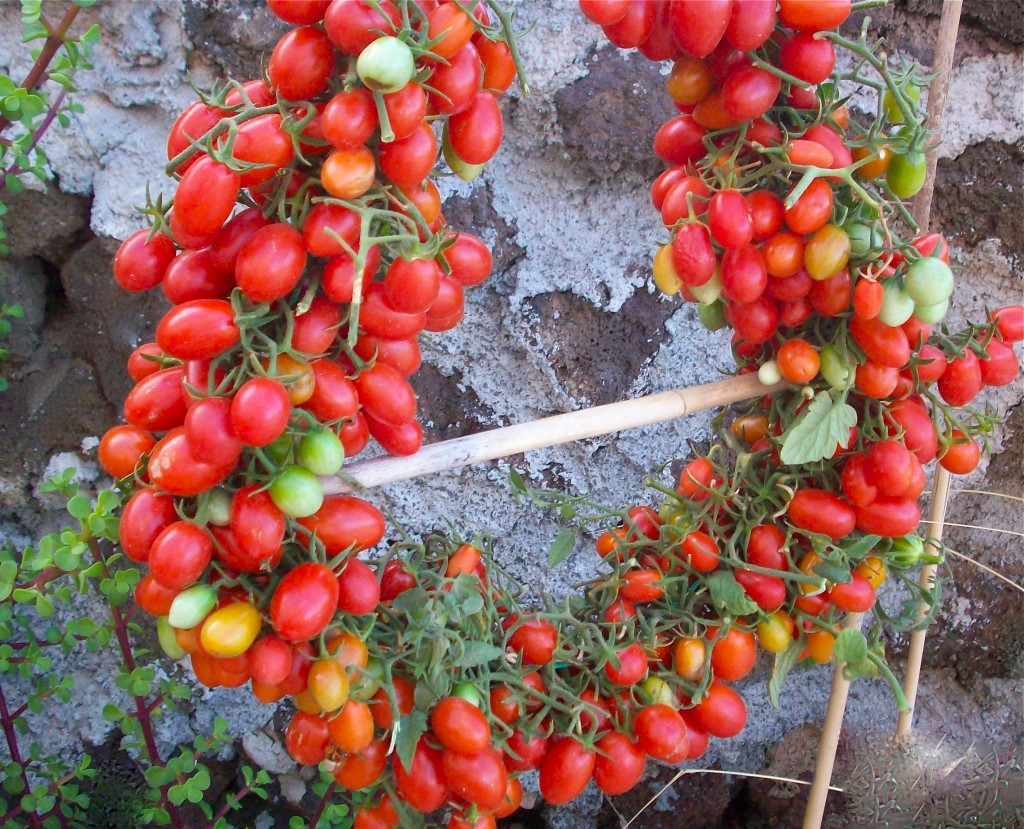 To chop or not to chop the garlic?: 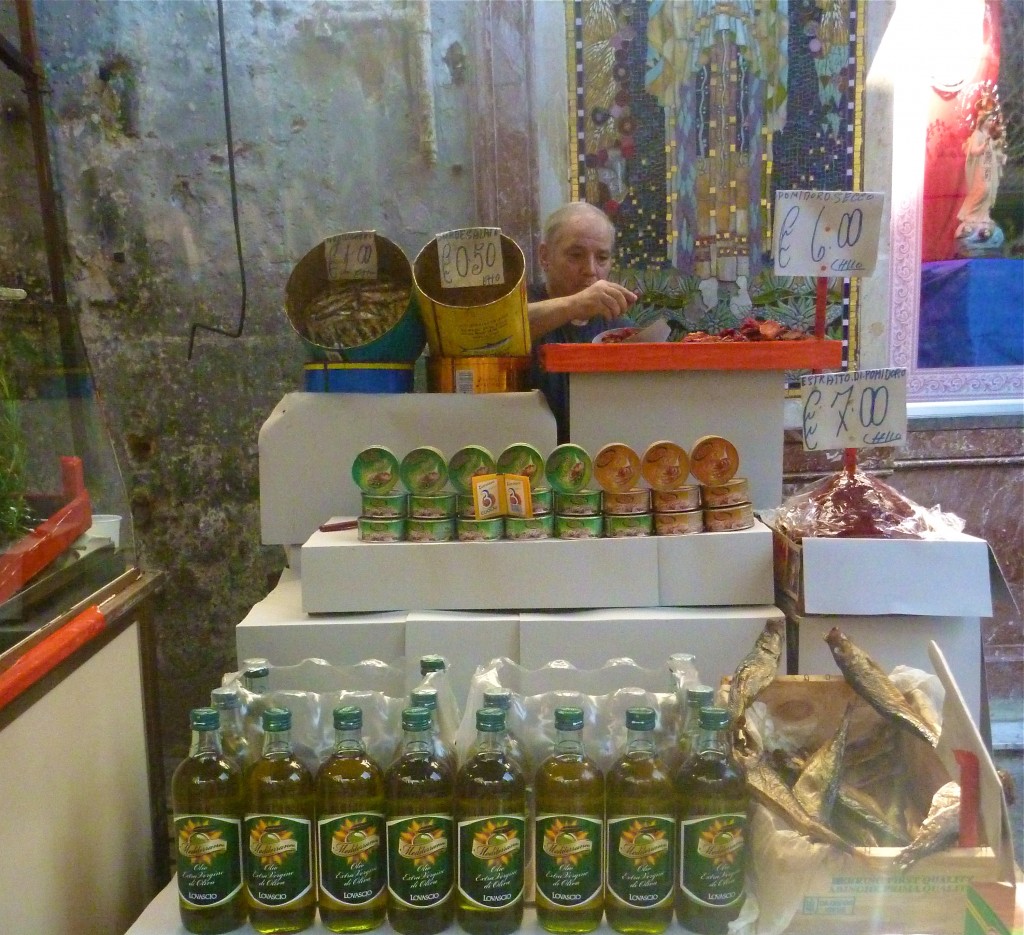 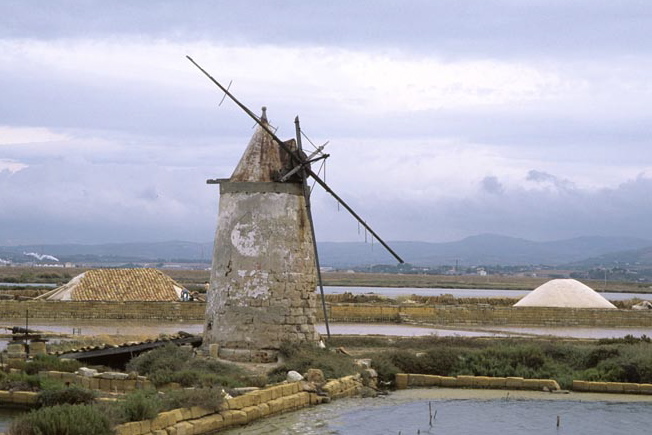 The preferred sea salt of all the chefs is Sicilian. The salt flats of Trapani.
Credit: Paolo Destefanis

About salt, it was unanimous–all the chefs were hooked on Sicilian (Trapani) sea salt.

On the matter of basil (fresh, of course): 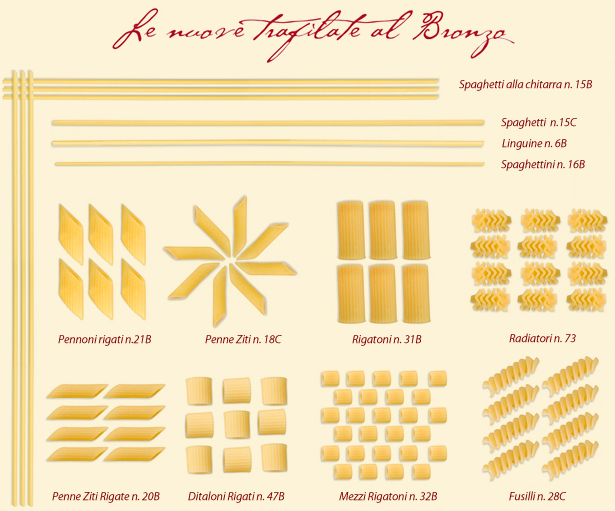 Cheese or no cheese?:

As for wine, Alessandra Rotondi, Italian wine expert and IDIC Master of Ceremonies recommended Lacryma Christi (literally “the tears of Christ) from Campania, from a grape that  grows in the same Vesuvio terroire as the San Marzano tomatoes.

You may add some grated Grana Padano DOP cheese, a rather common habit in some Italian families, but the original recipe didn’t include it.