Frost has snuffed out the last breath of Indian summer in New York, but warm up with these images of Sicily.  From Piero Catalano, the artisan food producer and master vinegar maker I met in Trapani province this past September (see “A New Vinegar is Born,” 26 October post), a postscript in pictures.  Next, go make yourself some stracotto (Italian extra slow-simmered meat stew) with aged vinegar…stay tuned for the recipe…. 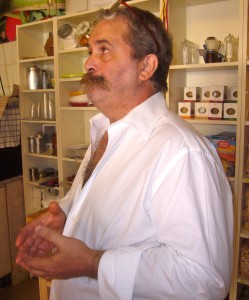 Piero Catalano’s sun-dried tomatoes and other local products on the shelves in his Trapani shop, KusKus. The most precious item is his vinegar.

Since then he has picked all of his grapes, cooked them down to a dense mahogany-colored juice, pressed the must and decanted it into chestnut wood barrels. After 12 years of aging the vintage ambrosia he learned to make in his younger days from the legendary vinegar masters of Modena, Piero’s Sicilian-style nectar will be born and baptized Suavis. As with aceto balsamico tradizionale–a far cry from the commercially-made doppleganger that has flooded the American market, to call it vinegar is to mislead you. It’s thick, sweet and deliciously tart, not sour and thin. 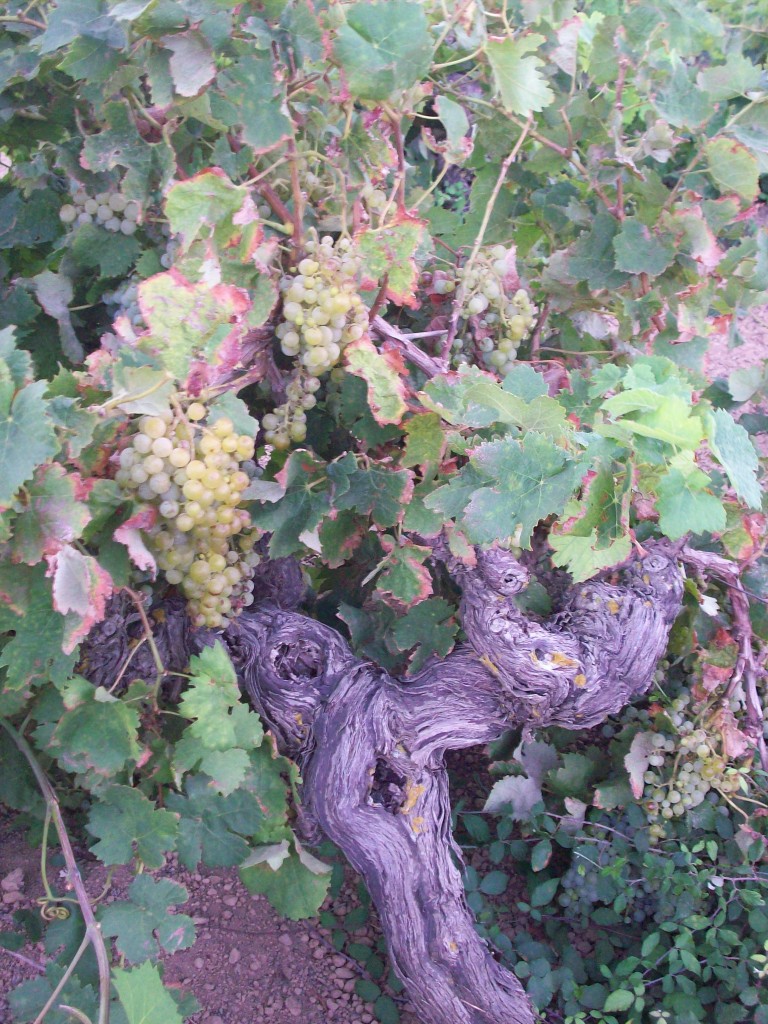 This is the grape, zibibbo (botanically, Smyrna, the prized vine of the ancient Greeks), ripening in Piero’s vineyard; they’re used for the table and wine-making as well as vinegar. 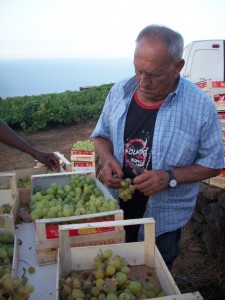 Gaetano, a neighboring  contadino and  maestro of grapes shows the harvesters how to pick and stem.

Piero’s workers help with the harvest; on a clear day, you can see Africa from this island.

But the comparison stops there. Unlike balsamic from the temperate north, Piero’s vinegar is from a wild island that is thrown 62 miles off the southeast coast of Sicily and only 44 miles off the coast of Africa, the hottest spot in Italy. The land is literally baked by the convection-hot Scirocco that blows in from the Sahara desert in July and August and is drier than the rest of Sicily. The torrid heat, hot wind and paltry rainfall form the grapes, concentrating a flavor already dense and rich from the volcanic ash. All this makes for a sweeter, fuller, sunnier, more potent elixir than a chillier climate could produce. 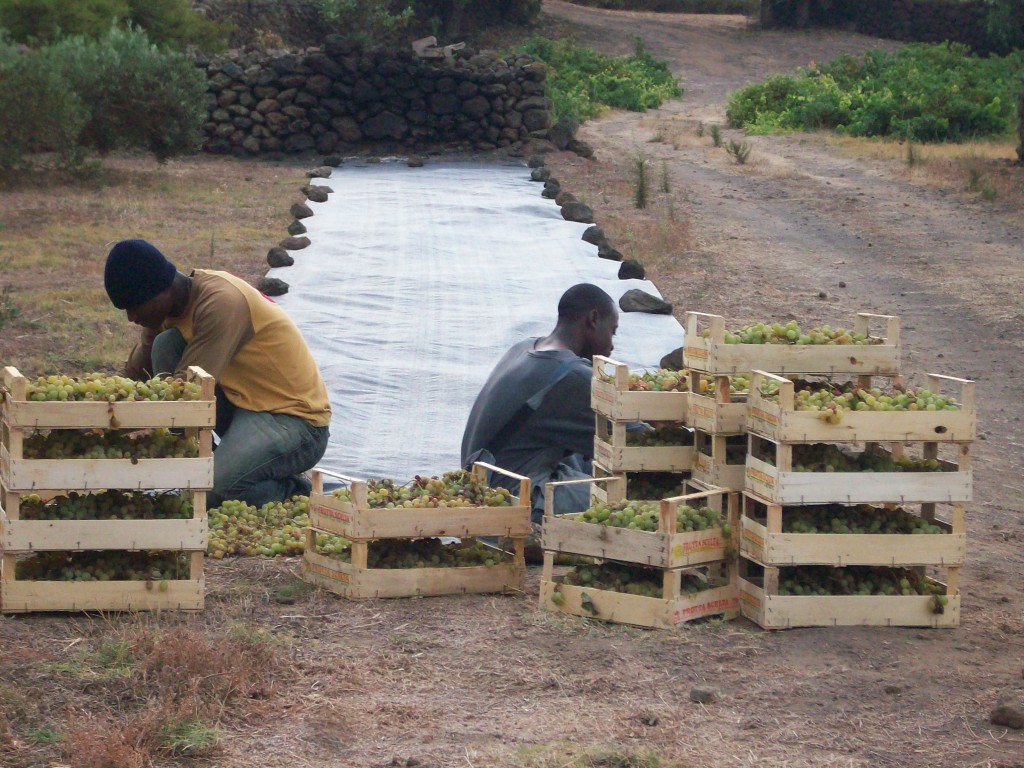 Spreading the grapes out to dry in the sun.

Most of all, the extraordinary vinegar is a reflection of its maker, a chef who honed his nose and craft; and of his wife, Francesca, and their grown son, Simone, who help plant and prune, trellis and trim, pick and crush the grapes. 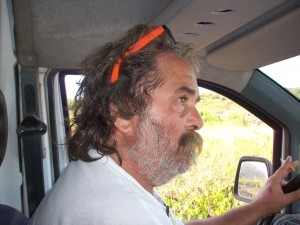 After a long, hard day in the fields… 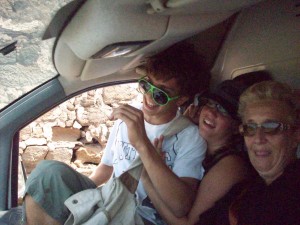 Such aged vinegar is made with more care than many fine wines. It’s precious and it’s pricy, meant to anoint, say, spring’s wild strawberries, a crusty grilled steak, or, silky gelato, drop by drop. For the initiated, the vinegar is da bere, “for drinking,” from a small cordial glass as a digestive. 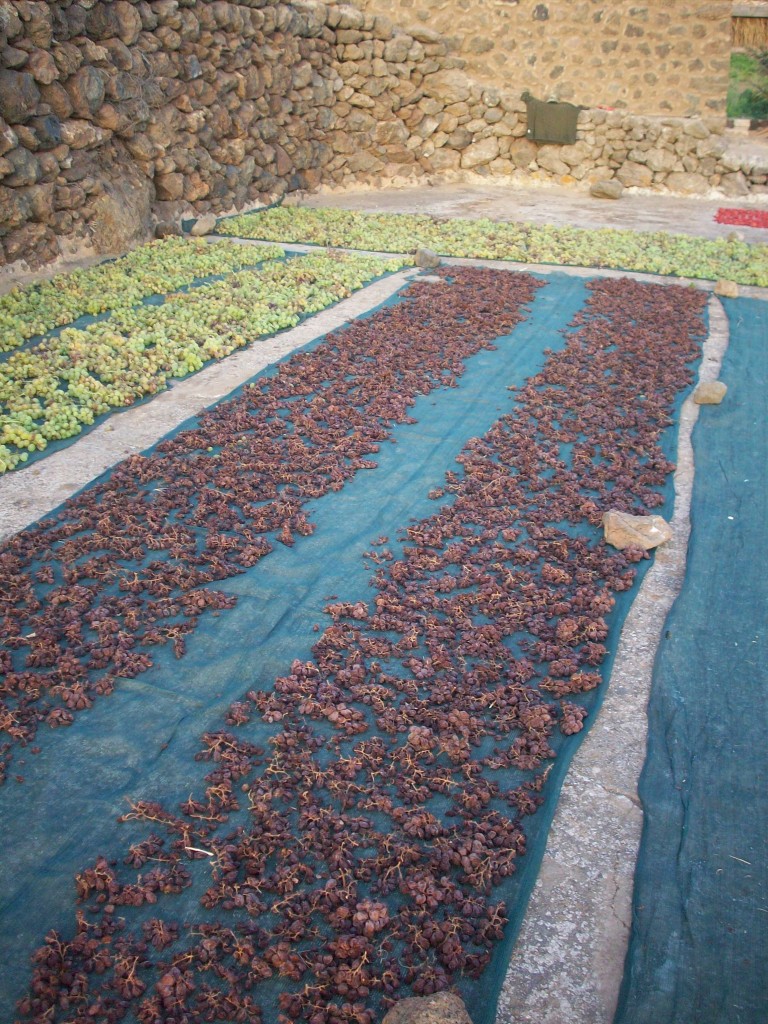 The grapes dry in the blazing heat for ten days, going from green to purple; they’re turned periodically for even exposure to the sun… 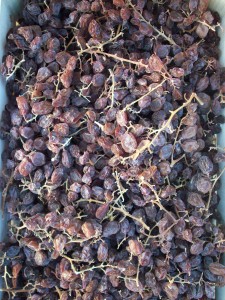 The fruit sugars have become concentrated but the grapes, now nearly raisins, are still plump…they’re ready. 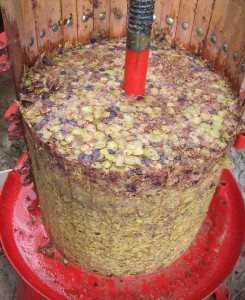 The dried grapes are  pressed delicately. 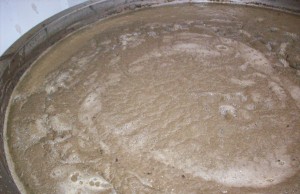 The resulting “mosto,” grape must, is simmered in the open air for 30 hours to make a thick, dark reduction; then it is skimmed and strained…

…and transferred to chestnut barrels to evaporate.

During aging, and decanting every six months to a succession of smaller and smaller casks the vinegar reduces to a rich, thick and glossy mahogany-colored syrup, at once sweet and tart.

Imagine. It takes 440 pounds (200 kg) of grapes to make 100 liters of pressed must. That cooks down to 60 liters of finished pure grape juice. A dozen years to condense and mellow before 4.05 liters of the syrup is ready for bottling. Yield? A mere forty 3-ounce bottles of precious Suavis.

Twelve years later, a unique  aged vinegar, Suavis Neropantelleria l’Altra, “The Other Face of Balsamic” is finally the perfect flavor and texture

Problem is, outside the borders of Trapani province, where Piero plies his trade, there is no Suavis–yet.  Remembering that he had branded his rare elixir “The Other Face of Balsamic,” I dared not ask if we could substitute…balsamico (the real and aged variety), say, for trying our hand at his signature dish and jewel-in-the-crown of all his recipes, stracotto con Suavis (extra-slow-cooked braised beef with the aged vinegar)? I put the question to him in a general way, not in person, but by mail. I needed his blessing. The suggestion, I think, fell on his ears with no less impact than a bomb blast. He wrote back,

…I tell you that Suavis is superior since it’s born from the noble zibibbo grapes of Pantelleria. I say this not from the perspective of self-interest but with logic. Have you ever seen the grapes they use in Modena? And in what season they make the vinegar? In Pantelleria we make our Suavis with the help of the sun, with volcanic earth.”

It was heresy to ask. Of course south is not north, and Sicily is not Emilia; Pantelleria is not Modena, and Suavis is not balsamico. I have not heard from him since.

Still, when not rotating his barrels and drawing the dregs–or making stracotto con Suavis–Piero is busy sending out photos of his “new babies.”

(I drank every drop of the Suavis Piero gave me [in a cordial glass, before bed-time] when I left Trapani–now, none left for stracotto. So I’ll keep you posted after trying my hand at the imagined stracotto, alla Piero–alas, without Piero’s recipe, and without his faraway aged vinegar from Pantelleria…)

6 Responses to “Piero’s “Better Than Balsamic,” Postscript with Pictures”