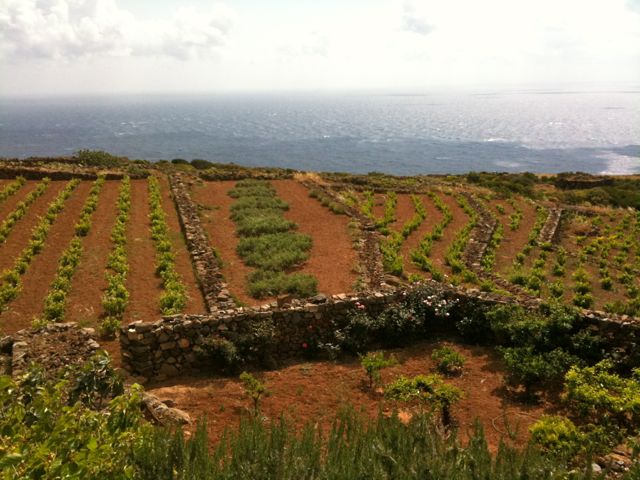 I don’t think there is a place in the world more ideal than Pantelleria to think of the Moon. And Pantelleria is much more beautiful. The endless plains of volcanic rock, the calm sea, the dammusi (traditional volcanic rock houses) where you can see African lighthouses through their windows on windless nights… the bottom of the sea asleep… an ancient amphora with stone garlands and the remains of some wine corroded over the years… bathing in a vaporous bowl in water so thick with minerals you can walk on it…

Some call him the “sea wolf,” but if he isn’t riding the channel between the volcanic island he lives on to his shop, KusKus, on 126 Via Garibaldi in Trapani, Piero Gaetano Catalano‘s feet are firmly planted in the ground of his vineyard and caper plantation.  Despite his many talents–poet, chef, gelato-maker, caper producer, and all around food artisan, he prefers to call himself “L’Acetaio,” the vinegar maker.

“There are experiences you have to have in life,” said Piero Catalano as we sat overlooking the Gulf of Bonagio from my hotel that was once an ancient tuna fishery. He believes that one of these experiences is the vinegar he learned to make as an apprentice in Modena, Italy’s famed vinegar region. But just as you can’t make real champagne anywhere in the world besides Champagne, you can’t make the traditional aceto balsamico di Modena anywhere besides Modena. What you can make under the hot Sicilian sun where Piero comes from is a Sicilian-style “black” vinegar that is even sweeter.

So back home in Pantelleria, a volcanic island that surfaces like a black pearl in the sea between Tunisia and Sicily, he started to grow the indigenous zibibbo grape (the Modenese use Trebbiano for balsamic vinegar) in the mineral-rich dirt.  He picks his vinegar grapes when they are ripe and juicy and then leaves them to dry under the scorching August sun. When they are as nearly as dehydrated as raisins but still juicy, he simmers them in the open air for thirty hours and packs the syrup into a succession of chestnut kegs where it can age and concentrate, unfermented, for 12 years.  In this evaporation process, 100 liters of cooked grape juice reduces 15% every year to yield a precious 6.75 liters at bottling time. Piero explains that Trapani’s sun-filled zibibbo grape has so many different fruit sugars that it doesn’t need five different types of wood casks in which to decant successively as it ages, like Modena balsamic tradizionale does. The result, suavis neropantelleria l’altra, “the other face of balsamic,” as he calls it, is no ordinary vinegar. A cross between traditional Modena balsamic vinegar, red wine must, and saba (sapa), Pantelleria “black” vinegar is honestly well-aged, sweet–almost chocolately, at once potent and mellow.

Piero will tell you that to  know his land, you must drink his vinegar. Later that evening, he placed a bottle of “the other face of balsamic” in front of my plate at the dinner table. “Drink it,” he said. So I poured the thick, ambrosial syrup onto my spoon and it coated my tongue like honey and I swallowed it.  It was not enough and I kept taking more and more and could hardly stop.  He was right. It was an experience to savor.

One Response to “Pantelleria, Sicily: A New Vinegar is Born”