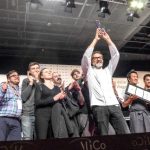 Back in the day when nouvelle cuisine was firing up the new chefs of Europe, I wrote in the introduction to my first cookbook, published in 1986, that Italy, a country that has complained about the excesses of French cooking since the 16th century, would never succumb to it. Take, as an example, the words of Gerolamo Zanetti, a 16th century Venetian, which are still uttered by modern Italians: French cooks have ruined Venetian stomachs with so [many] sauces, broths, extracts… in every dish… meat and fish transformed to such a point that they are scarcely recognizable by the time they get to the […more…]