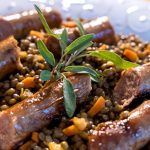 Lentils and pork sausages, the first to represent coins, the second for abundance, served up together, has long been considered an auspicious dish with which to usher in the New Year in some parts of Italy. Take Modena’s lenticchie di Capodanno, braised lentils crowned with zampone, a delicate mixture of finely ground pork subtly seasoned with nutmeg, cloves, cinnamon, garlic, and black pepper stuffed into a pig’s trotter; or cotechino, a similar sausage, sans the trotter. One or the other is obligatory eating when the clock strikes midnight everywhere north of Rome—sumptuous eating, but not easily reproduced outside of Modena […more…] 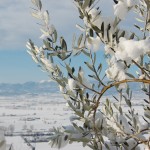 Put them together for the quintessential Italian New Year dish, lenticchie di capodanno (lentils for the new year). Lentils, round and copper-colored, should remind you of money; pork shouts fatness and increase. And the olive oil? Nectar of the gods. “A drop of olive oil on the head, a drop of wine on the lips” remembers writer Bill Marsano, was an infant’s blessing in Italian households. It anoints the breasts of monarchs at their coronations and marks the foreheads of the dying in their final breath of life. In your food, it’s no less a benediction. New Year is an […more…]