The Hudson Valley, just upriver from Manhattan, takes Halloween very seriously what with its famous one-time resident, Washington Irving, having written “The Legend of Sleepy Hollow,” America’s first ghost story. Besides the usual Halloween parades, the towns up and down the river host vampire balls, real haunted house competitions, the Headless Horseman’s night ride reenactments, and tours to the cemetery where the author himself and the once flesh-and-blood Katrina Van Tassel are buried. But best of all is the Great Jack-o’-Lantern Blaze, an artistic spectacle that even grownups can love. If you can’t make it, have no fear. Feast your eyes on Nathan Hoyt’s photos for a virtual tour. 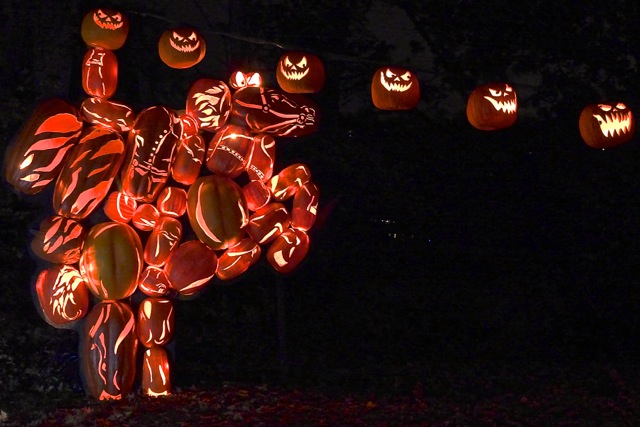 The star installation is the Headless Horseman of  Washington Irving’s delirious tale involving a decapitated soldier who haunts a secluded glen on horseback every night in search of his head. The story was inspired by a real life Hessian militiaman who lost his head to a cannonball during the Revolutionary War and is rumored to be buried near the old Dutch church in Sleepy Hollow. 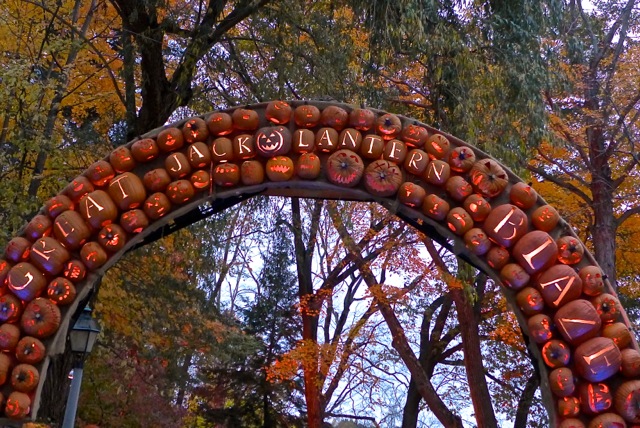 Historic Hudson, the non-profit that sponsors the Blaze, commissioned 240,000 pounds of pumpkins from local farmers for the makings of jack-o’-lanterns that light up twenty-five of the 120 acres that John D. Rockefeller donated for parkland in 1920. 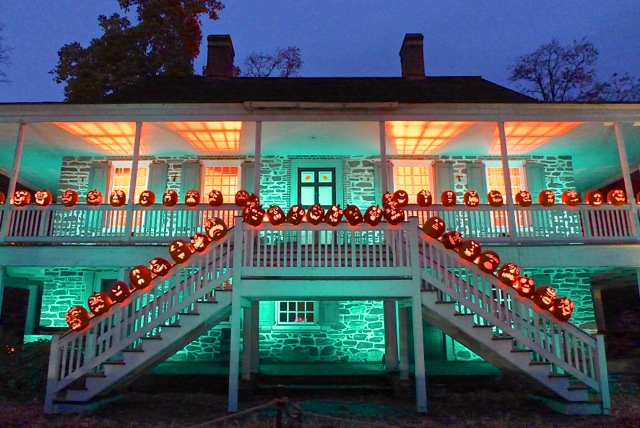 In Irish lore, the jack-o’-lantern placed outside the doors or windows keeps evil spirits from entering the house. So on the one holiday a year when we mock the specter of death, there can’t be too many of them. . 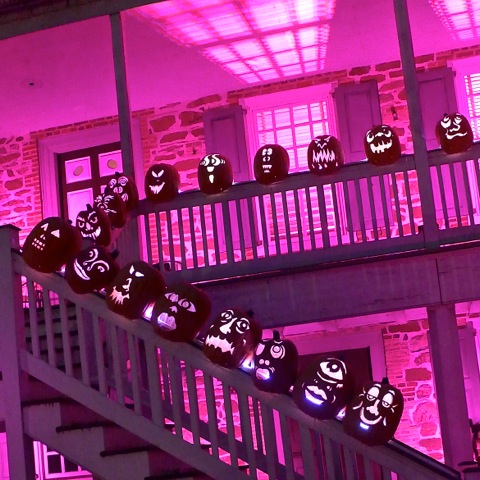 Jack-o’-lanterns at every turn. The Ferry House at Van Cortland manor, c. 1750, today a museum, offered food, drink, and lodging to travelers on the Albany Post Road during colonial times. 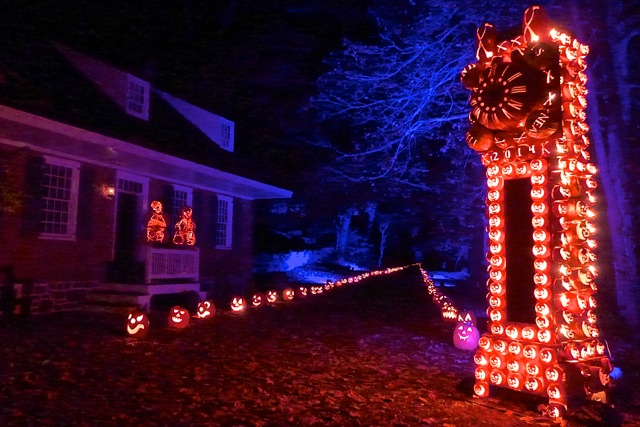 Haunted grandfather clock and a colonial couple outside the Dutch stone manor house. Irving’s tale was kindled by the Dutch settler’s predilection for ghost stories. 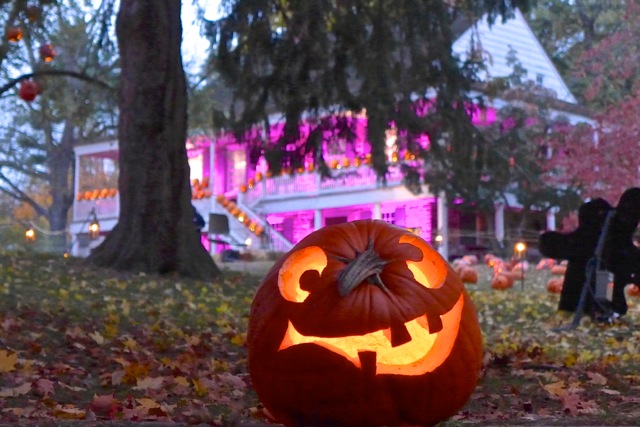 Some 1,000 carvers, both volunteer and professional are kept busy re-carving and replacing pumpkins as the old ones rot and collapse. 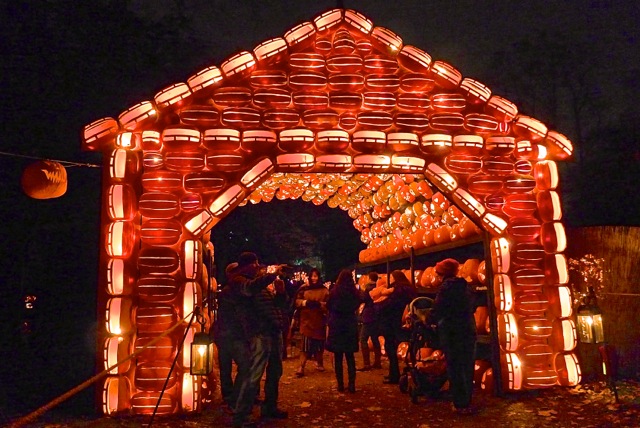 The covered bridge and full moon of Sleepy Hollow legend. The Headless Horseman was said to menace anyone who tried to pass through the hollow at the entrance to the bridge, brandishing what looks like the rider’s severed head.

Jack-o’-lantern monument to the unfortunate Ichabod Crane. The character vanishes without a trace during a chase for his life, except for his wandering horse, his hat, and a telltale shattered pumpkin, thought by the locals to have been exchanged for poor schoolteacher’s head. 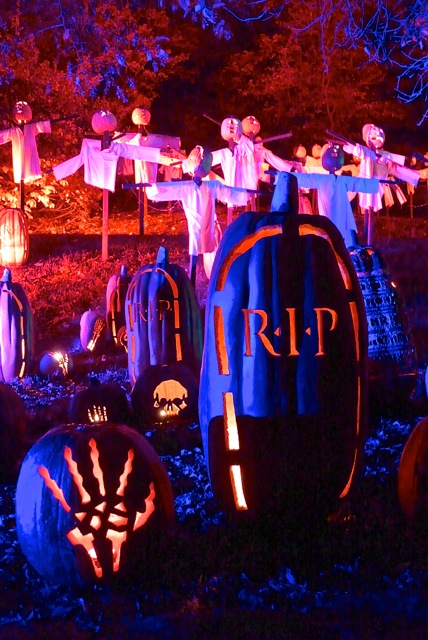 Colorful graveyard. In American Halloween lore, jack-o’-lantern represent the souls of the dead.

Among other attractions, skeletons and rattlesnake bones in a Death Valley scene. 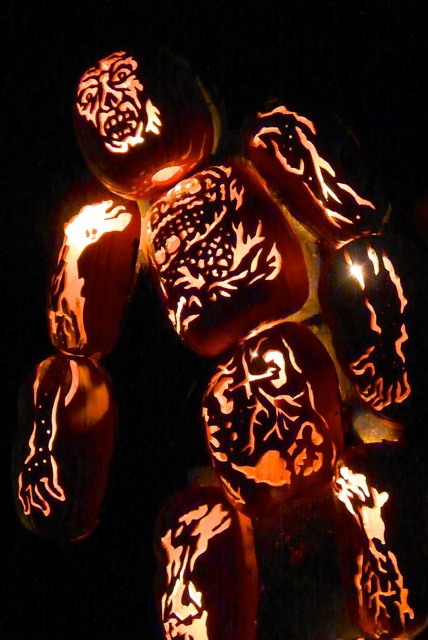 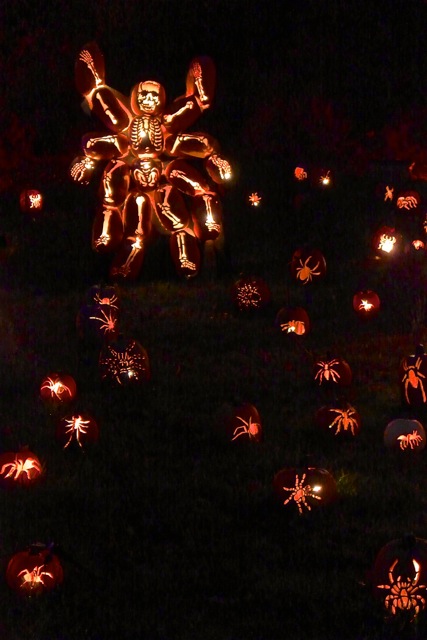 A black widow ghoul and her offspring. 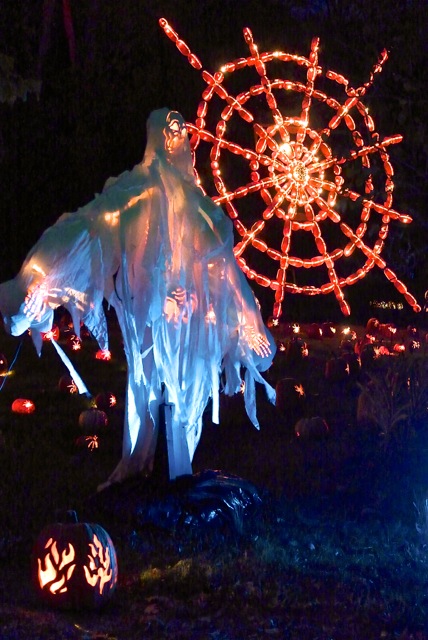 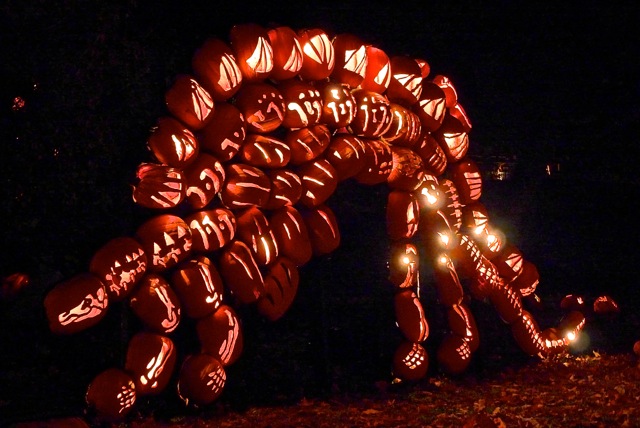 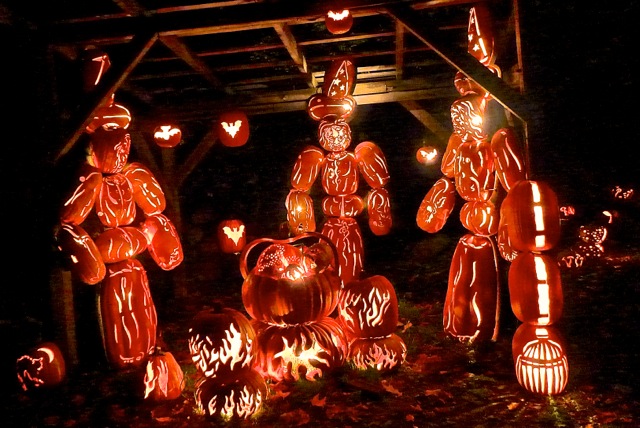 The three witches of Shakepeare’s play, Macbeth, stirring their cauldron. 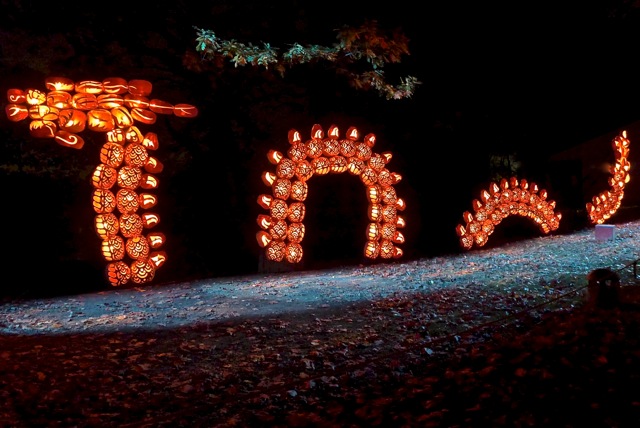 A glowing giant sea serpent in a jack-o’-lantern sea. 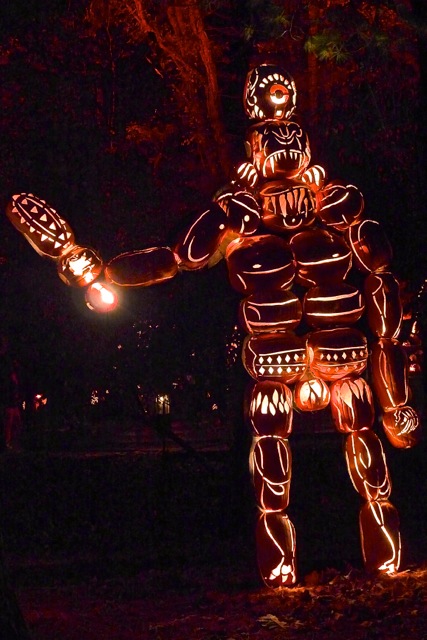 Wide-eyed wonder in the jack-o’-lantern planetarium.