Summer Fancy Food Show, New York, 2014. The Italians always come bearing cheeses and prosciutto, impeccably dressed and wearing the latest eyeglass styles. If you want to sample some truffles or condimento, they’d rather huddle together in the back corner of their little booths and sip espresso than give you any. You have to wait until they’re good and ready to sell you something, or for those without importers yet, to promote something. That’s the the idea, isn’t it?—To sell you something? Even my “Press” badge doesn’t budge them. 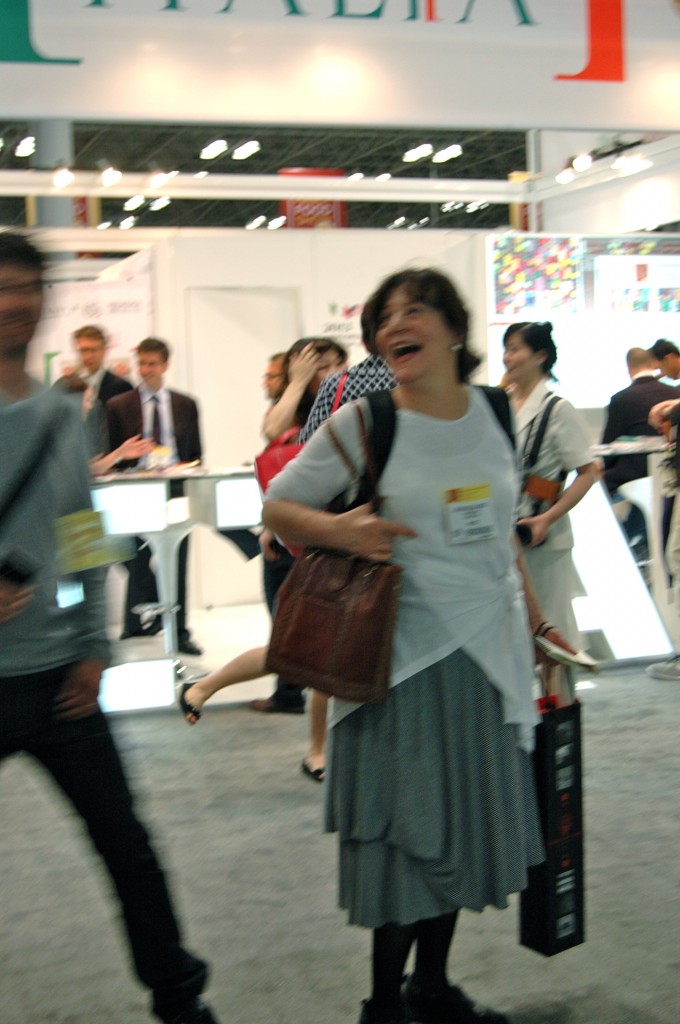 My first stop is always the Italian pavilion.

Still, the Italian pavilion is always my first stop. I like the comfort of knowing that no matter how often the government changes in Italy, some things stay the same. Though the Italians are always riding the wave of fashion—more often than not creating it—there are certain traditions. I know, I grew up on them. So in a way, it’s like going back home, if I can ever figure out on which side of the ocean that was, or which part of the Italian geographical boot, for that matter. Sardinia, my mother’s turf, is a long way from Puglia, my father’s. Italy has never been one nation in spirit, and it certainly didn’t unite under our roof. What anchored me was the food. There was always consensus on that. As long as my mother didn’t get any ideas about trying out the fads of the times—T.V. dinners, canned soup, instant meals, or other 1950s American food notions—my father was compliant. I remember bumping along in the backseat of my parent’s 1955 Dodge for long drives to the Italian neighborhoods of Paterson and Newark for olive oil, canned tomatoes, and spaghetti in two-foot lengths wrapped in indigo paper. My mother was always lamenting the gaminess of American lamb, claiming it was no better than mutton, or the toughness of the artichokes. Tomatoes didn’t taste like tomatoes should and where would she ever find the potent mushrooms of her girlhood? It seemed like we were always on a quest for some ingredient or other that she wanted. It’s no wonder I’m hardwired to sniff and taste for a living.

At the Fancy Food Show, I get to take a tour of every region in one afternoon. Italy’s pavilions, organized by region, exhibit the predictable sampling of their foods every year. On this day, the first of the show, Campania’s mozzarella di bufala had the proper porcelain sheen and was pleasantly sour and faintly mossy, the way it’s supposed to taste, even if it’s a few days old. (If you talk to a mozzarella maker in the “buffalo lands” of Lazio and Campania, he will tell you he wouldn’t dream of eating it if it is more than two hours old.) You can sample proper Pecorino Romano, and realize that by the time it reaches your table in America, it usually doesn’t taste anything like this—aged and seductively salty but at the same time fresh, moist, and cool on your tongue. The Pecorino Romano we get in our markets is too often dry and brittle. 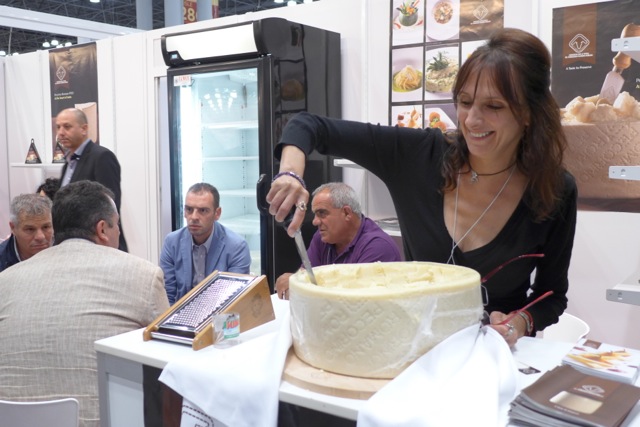 Exhibitor Renata Bovara of the Pecorino Romano Consorzio of Sardinia flaking off pieces of the cheese for tasting; business as usual in the background. 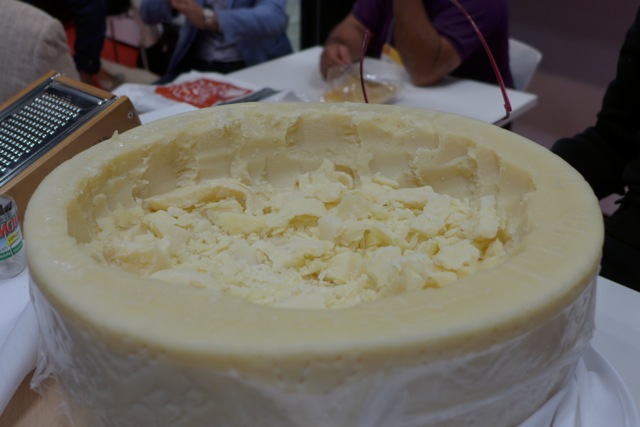 Emilia-Romagna is always there with its glorious Parmigiano-Reggiano, a cheese so valued that at the dairies, uniformed guards carrying machine guns shadow its transfer from the aging rooms onto Brinks-like armored trucks that speed away with their precious cargo for the markets in a cloud of dust. Aside from the genuine classics exhibited by the regions, there are rarer cheeses to be discovered at Atalanta food importers, including Pecorino Affienato, a beguiling sheep cheese aged in hay and honey made near Florence that induces dreams of Tuscany in September.

Checking out what Atalanta has to offer.

As for salumi, another big food category for Italy, there were only those that are permitted export to this country. Prosciutto makers are still curing their hams by essentially the same process their ancestors figured out thousands of years ago, even if there is so much demand for it that some of the swine are bred in Germany for them—in compliance, I am told, with the prosciutto makers’ traditional sustainable practices. You could walk by an exhibitor expertly slicing prosciutto crudo with a knife, not by machine; you know as soon as it goes into your mouth what a difference a cold knife or a hot blade can make on that ethereal slice of ham as it reaches the taste buds clear at the bottom of your stomach.

Offering a taste of artisan prosciutto made in Parma, sliced by hand. 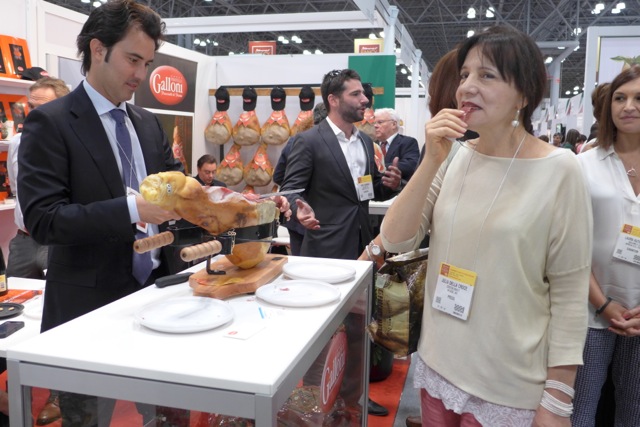 Sliced by hand, there’s a difference in taste and mouth feel. 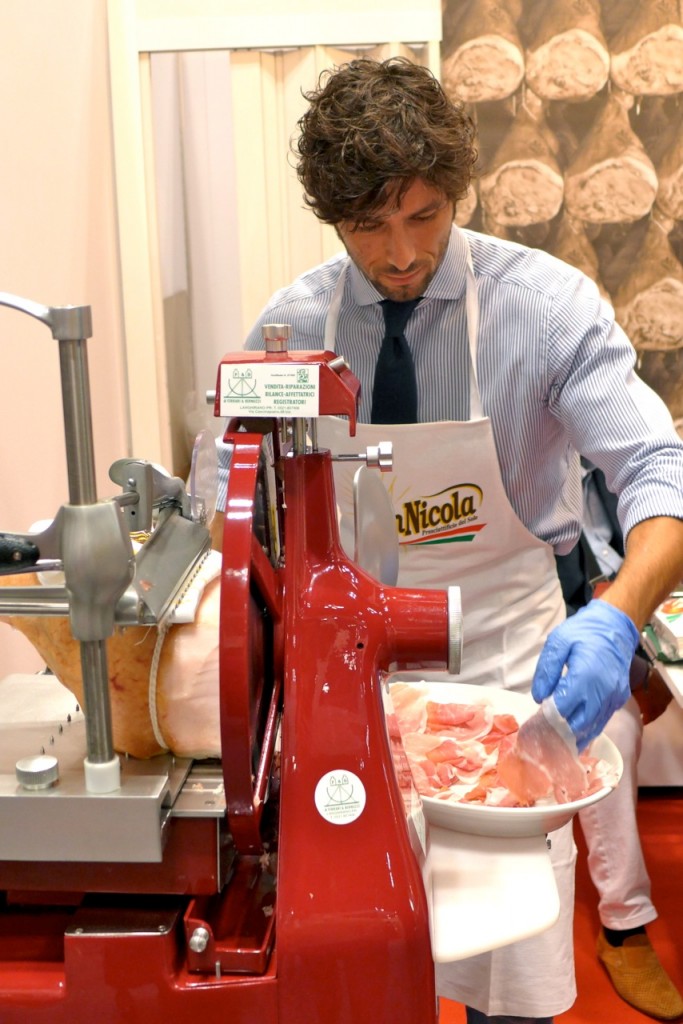 Slicing prosciutto by machine is practical and efficient, and the ham is still buttery.

Unlike many of the novelties at the show, most new products here are informed by tradition. Martina Colonna, the daughter of Prince Francesco Colonna, says she reluctantly gave up city life in Rome in 1996 to take over the family’s 200-year old estate in Molise, where she makes D.O.P. olive oils that have won multiple international awards. The delicate mandarin and bergamot extra-virgin olive oils pressed with the zests of those fruits are intriguing, if not for cooking, as finishing oils or for baking. “You can’t imagine how much work it is for all the women that work in the frantoio peeling mountains of the citrus just to take off their zest,” she said. 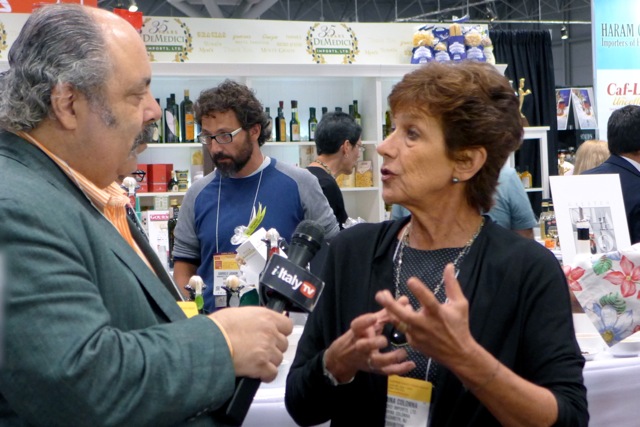 Another olive oil producer, from Puglia, Olio Merico Salento, whose estate in Miggiano I visited recently, makes a more piercing citrus-extra-virgin olive oil using a third fresh lemons in the press along with her Cellina varietal olives. Yes, the result is so citrusy that it veils the essence of the olives, but when used to enrich and flavor a ricotta spoon dessert, for example, which she made for me on site, it is a revelation (true extra-virgin olive oil is as much a fruit juice as an oil). It’s exported by her sister, Marta Lisi of Attavola. 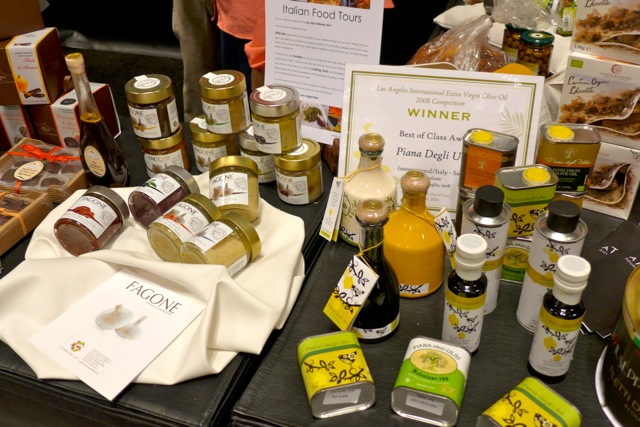 Neither this nor Marina Colonna’s are infused oils, a product that was the rage for a few years. Do you remember those? Rather, here, olives and citrus peel are pressed together and the water of both fruits are spun off at the pressing stage through centrifugal force. While infused oils never had a presence in my pantry—I want to taste the unadulterated olive flavor of the oil, not some gussied up rosemary or garlic infusion, I have found a place for these citrus-olive oils. Just the other day, I dressed roasted beets with Marina Colonna’s clementine oil. They were much the better for it. Other exceptional products from Attavola included moist, wood-roasted Calabrian figs wrapped in fig leaves, hands down the best dried figs I’ve ever tasted (you’re looking at a fig aficionado here). 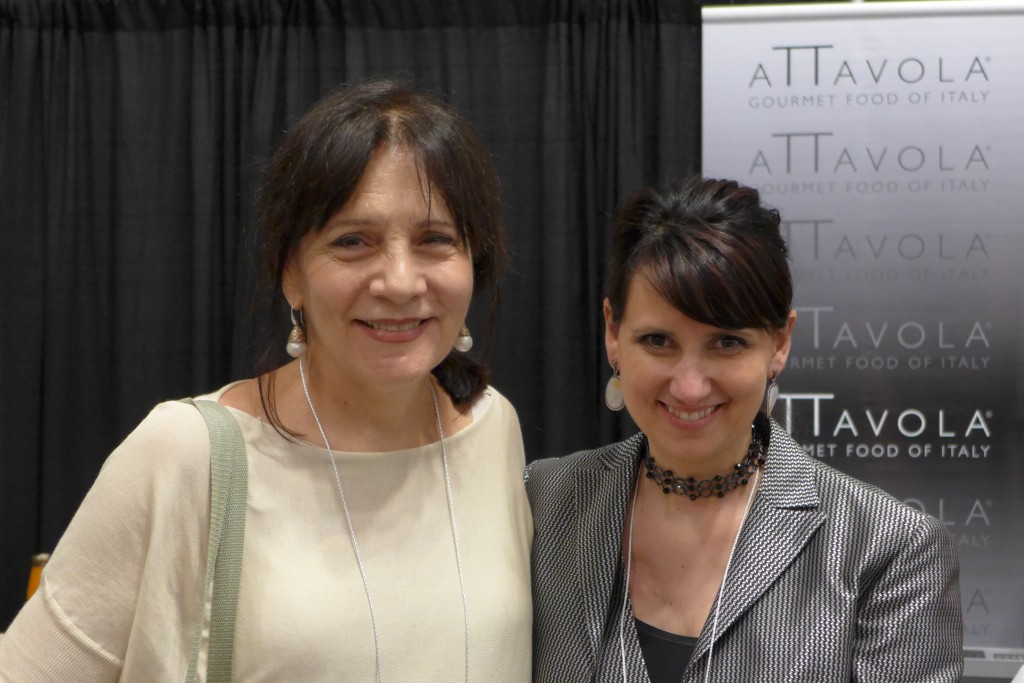 With Dott.ss. Marta Lisi at Attavola, where I discovered the wood-roasted figs.

A new discovery was Mugolio, a unique sweet pine cone syrup made by a forager in the Trentino part of the Italian Alps—think of it as the Dolomites’ answer to Vermont’s maple syrup. Redolent with the scents of rosemary and wild Alpine herbs, it’s as beguiling an aromatic as you’ll find for flavoring pork or game, or for lacing over only the very best ice cream or gelato. Having spent some years exploring the Dolomites for my book about the Veneto, I was astonished not to have ever come across it before. Good restaurant chefs are dazzling their patrons with elusive ingredients like this up their sleeves, but with such provisions in a home pantry, it becomes easy to make food taste sublime with little effort. 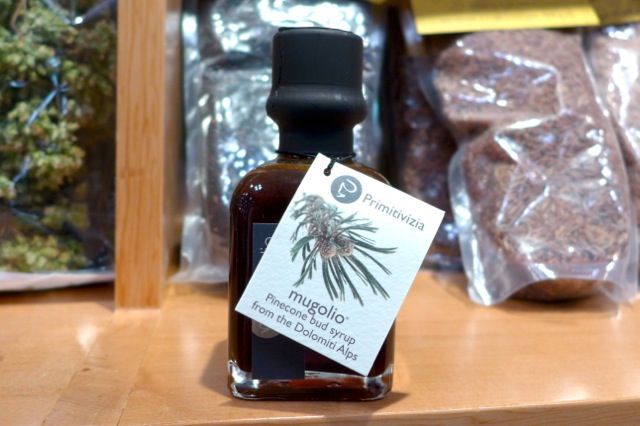 Mugolo, an artisan pine bud syrup from a forager in from the Italian Alps, imported by Manicaretti.

Benedetto Cavalieri, from Maglie, Puglia, a third generation pasta maker whose artisan operation I saw in person only a few months ago, makes one of the best pastas in the world. I only wish we had access to the many shapes the pastificio distributes in his local area. 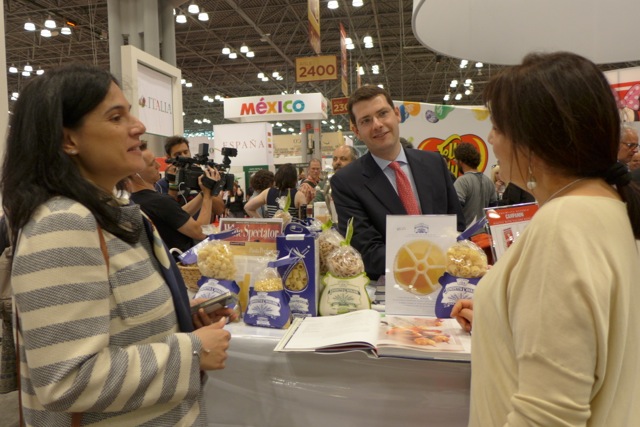 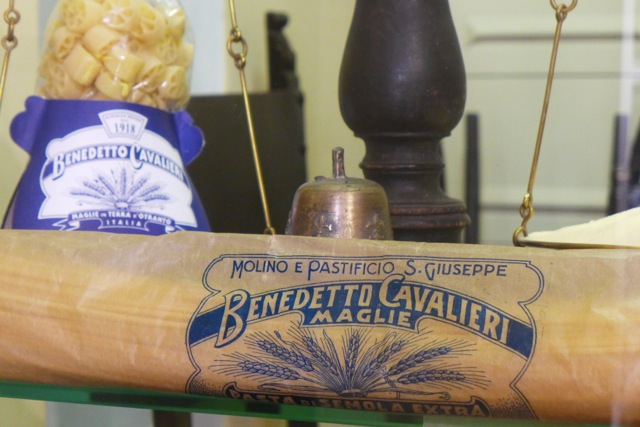 Benedetto Cavalieri pastificio, founded by Andrea’s grandfather in 1918, a legend in Puglia, is made from the family’s own wheat.

I rarely miss a visit to Gustiamo, which imports high quality products from small artisan producers  around Italy, and links me to the people who make them. Those ritual stops are a way of getting my bearings before, like Dorothy, I’m whirled away from Kansas into a dazzling, if not always agreeable, journey into the world of “Fancy Food.” I’m always on the lookout for genuine products and foods made by people, not industry, things that, above all, taste good because they come from nature. 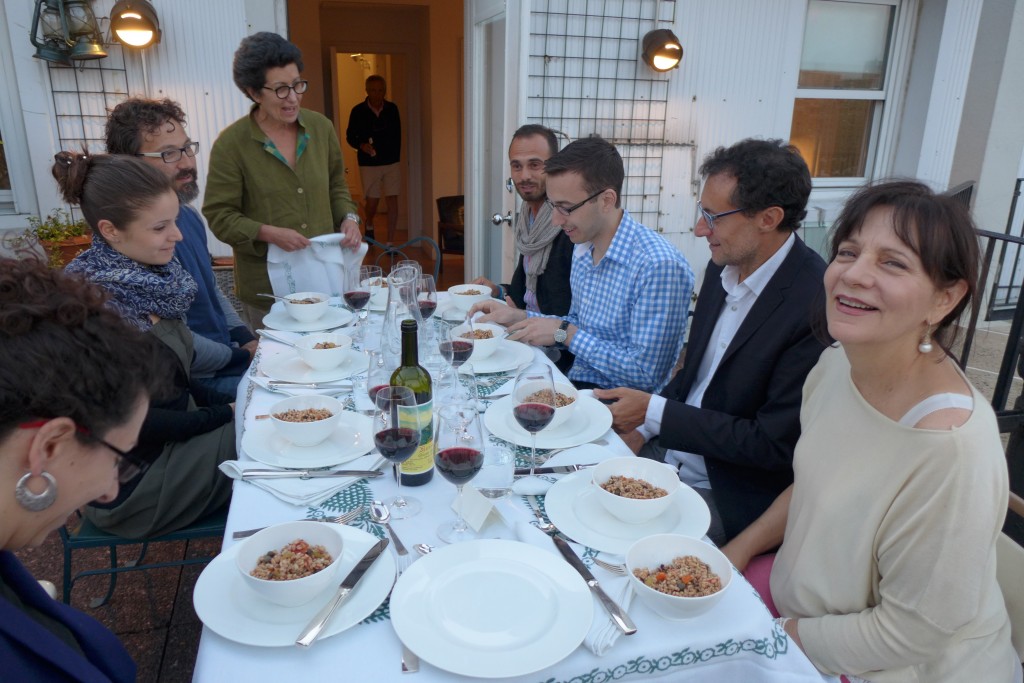 After the show, dinner with Beatrice Ughi and some of her producers.

When I learned that Manicaretti, an importer of Italian artisan products that has something of a cult status among the country’s best chefs, was coming to the show to introduce a line of pastina, of all things—Italy’s answer to baby food—I made an appearance. If you read a recent Mother’s Day article I wrote for Zester Daily, you know that I’d love to see more Americans feeding it to their kids instead of rearing them on junk food. You’re lucky if you can find the little pasta stars in the supermarkets any more. The name of the game has more to do with how much shelf space glitzy new products can command with their big adverting budgets than about displaying products that might actually constitute food. Real food just gets overshadowed by all kinds of processed stuff marketed for kids that scream, “natural,” but they’re more often than not nothing but junk food in drag. 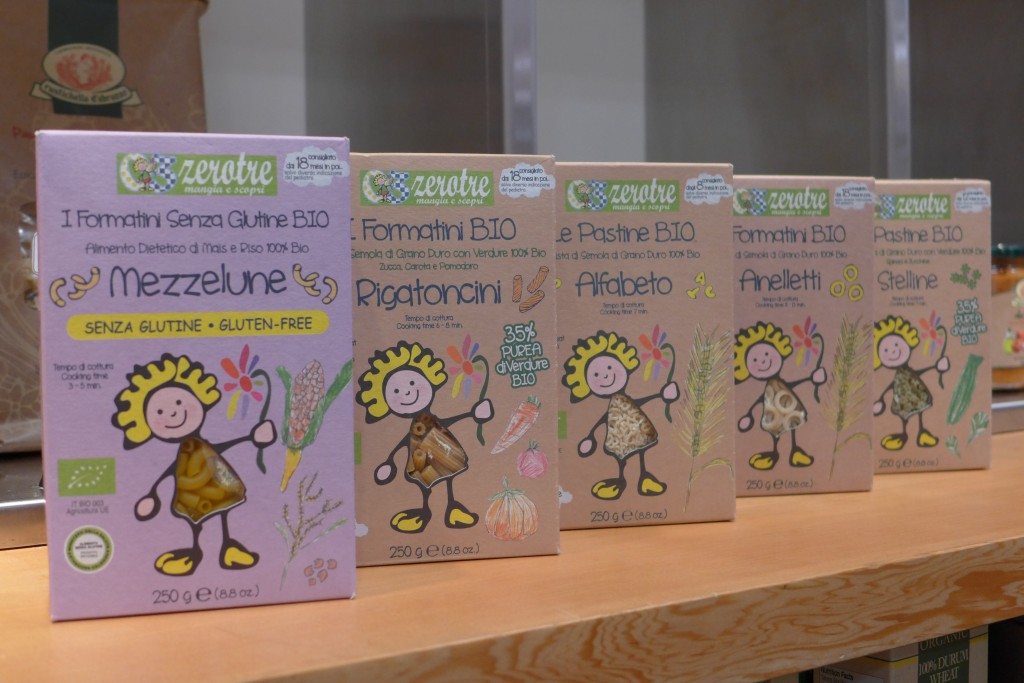 I’ve walked nearly every show in New York  for twenty-five years, even singling out good pasta makers from time to time to suggest they come out with a children’s pastina line. Finally, along comes Manicaretti with ZeroTre, made by Rustichella d’Abruzzo, one of Italy’s leading artisan pasta makers. It was actually the brainchild of Maria Stefania Peduzzi, one of the pastificio’s owners, who happens to also be a school teacher. 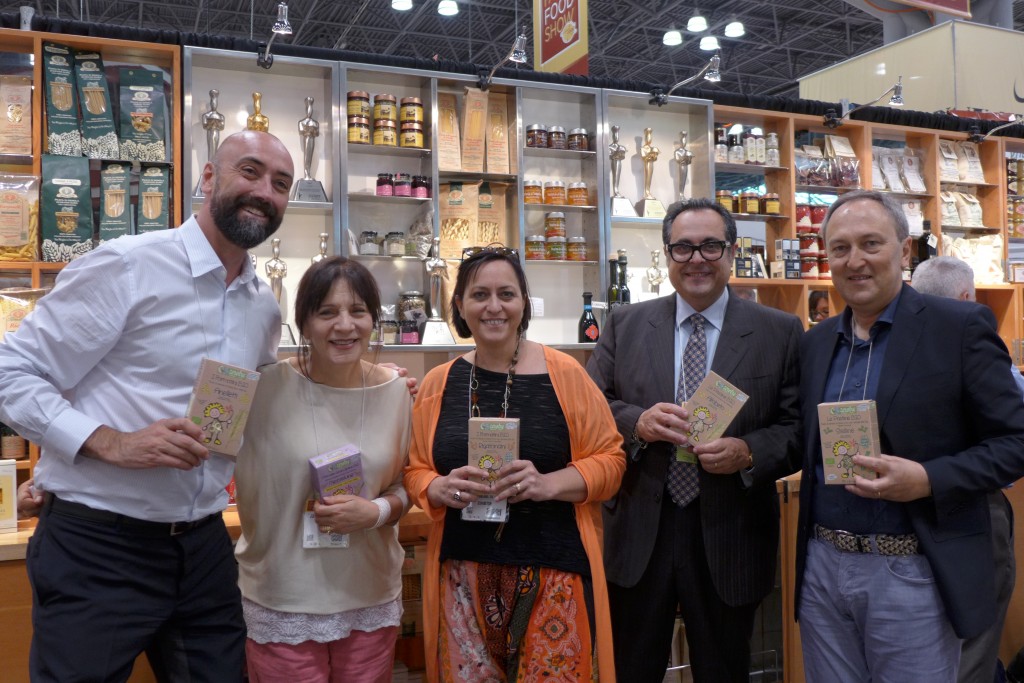 There are five different pastina varieties, including “alphabets;” “little rings;” gluten-free “half moons” made of corn and rice; baby “rigatoncini” made of durum wheat, pumpkin, carrot, and tomato dough; and “little stars” made with durum wheat, spinach, and zucchini. I took a day out of my schedule to chat with everyone who stopped by Manicaretti’s booth, where two chefs from Mario Batali’s Del Posto in NYC, which stocks much of Manicaretti’s ingredients, whipped up pastina dishes so outrageous that people (grown-ups; no kids allowed in the show) lined up for the “little stars” in freshly made capon broth with Parmigiano-Reggiano cheese.

For those of you who didn’t make it, continue here for more details, links, and a roundup of products represented at the show that I found exceptional, including standing favorites, and new items.

All photos by Nathan Hoyt

2 Responses to “Going Italian at the Fancy Food Show”