My father left his native Toritto as an infant in his mother’s arms in 1909. With his young parents and grandmother, he sailed for Ellis Island in steerage. The family said that in those bleak times in Puglia, they had survived by eating the wild greens that grew in the fields where they had toiled. Although he returned to Italy many times as an adult, especially to the Carrara quarries to buy marble for his shop in America, my father never went back to where he was born. What kindled his memory was the food he was raised on. His favorite was pasta with beans or chick-peas. He insisted that my mother cook the bitter greens—cicoria (dandelion greens) and cime di rapa (broccoli rabe)—which the emigrants grew in their gardens or occasionally managed to find in Italian markets. 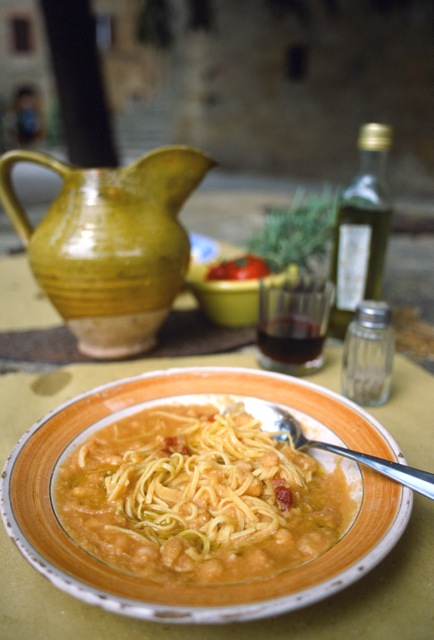 Pasta e ceci, a dish of the cucina povera. | Photo by Paolo Destefanis for Roma: Recipes From in and Around the Eternal City, by Julia della Croce

Despite a lifetime of traveling Italy’s far corners and byways, something has also kept me away. Last month, some six years after my father’s passing at nearly 100, I decided it was time for me to feel Toritto’s dirt under my feet. 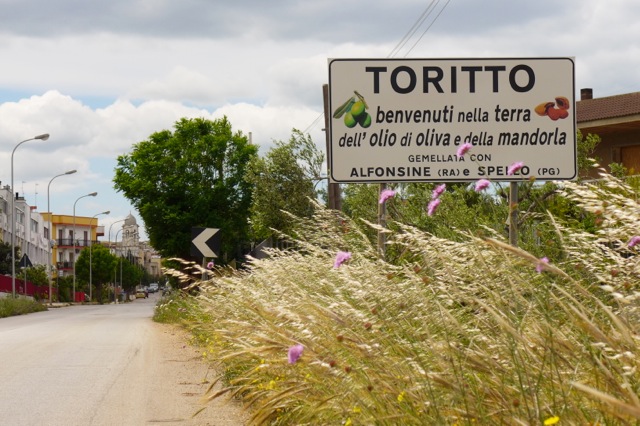 “Welcome to the land of olive oil and almonds.” | Photo: Nathan Hoyt

I made a stop in what seemed like a desolate town and then headed for the countryside where I knew my family of poor sharecroppers was bound to have lived. 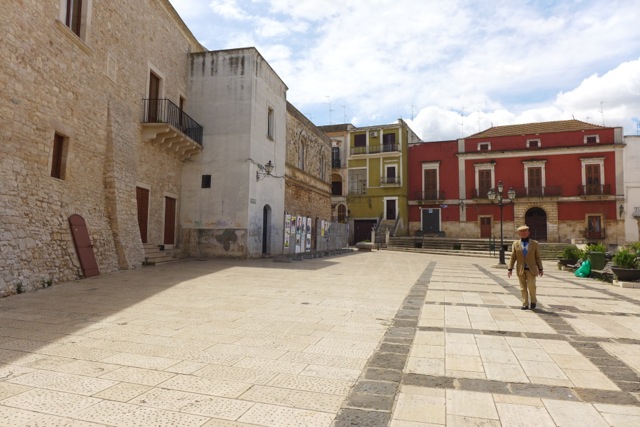 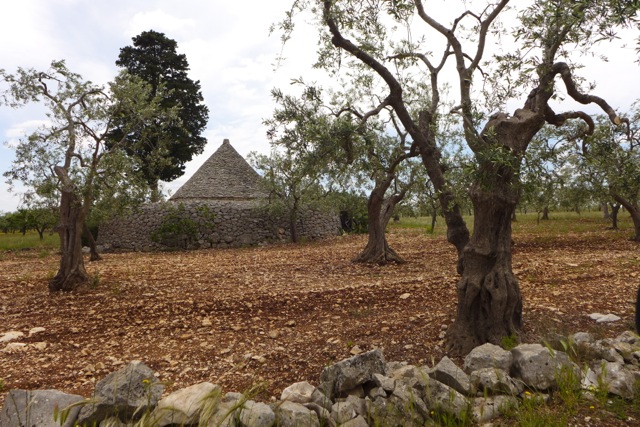 In the nearby countryside, a trullo, a traditional peasant hut with a conical roof. | Photo: Nathan Hoyt

Following a dirt road out of town into what seemed like a maze of endless olive groves, I saw a lone man tending a garden and stopped to talk to him. 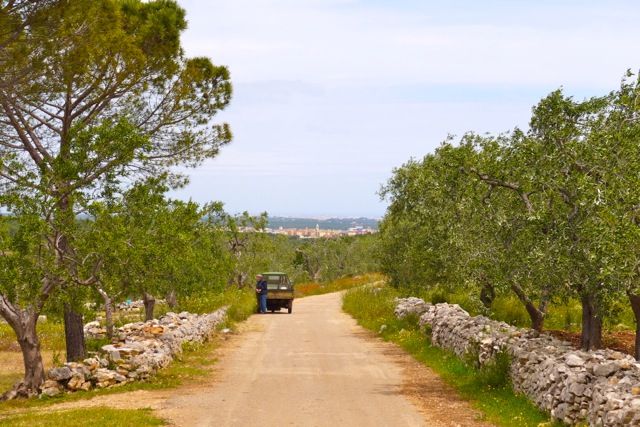 Toritto, in the distance, and olive trees as far as the eye can see. | Photo: Nathan Hoyt

His face read familiar, and his vernacular, too. His house, a simple tower without running water or power, made of stone retrieved from a nearby ruin, was surrounded by cherry, almond, and olive trees, artichoke fields in bloom, vegetable patches, and fields of the cicoria and cime di rapa that my father adored. 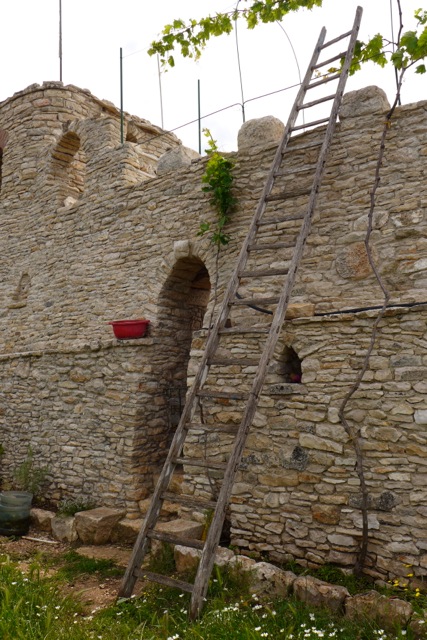 A tower fashioned from a trullo ruin. | Photo: Nathan Hoyt

Our host in his open-air kitchen with self-portrait in stone. | Photo: Nathan Hoyt

He invited us in to the tower, a work in progress—there was no roof yet; the garden is where he really lives. 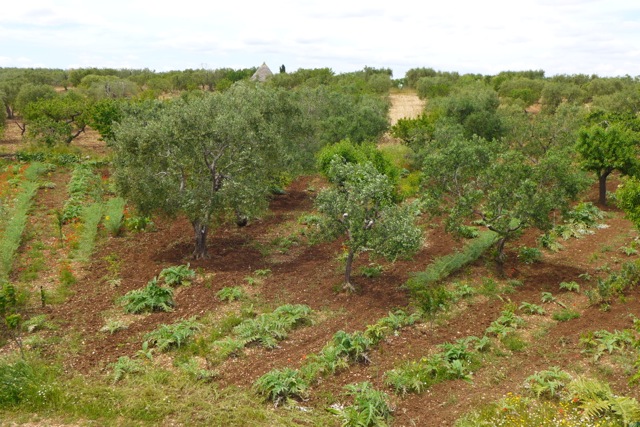 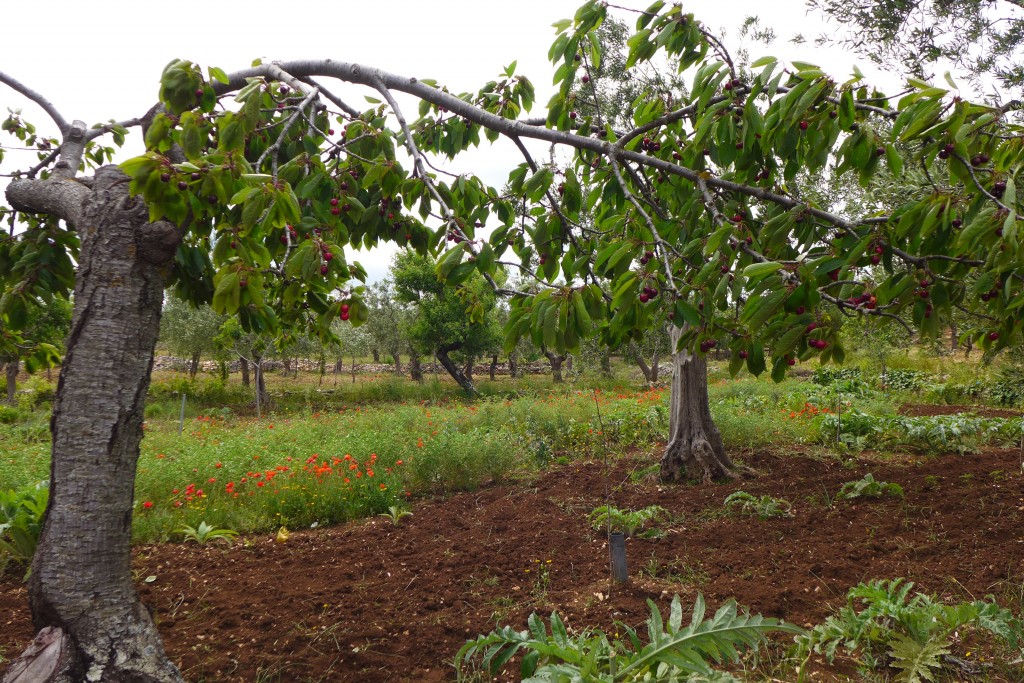 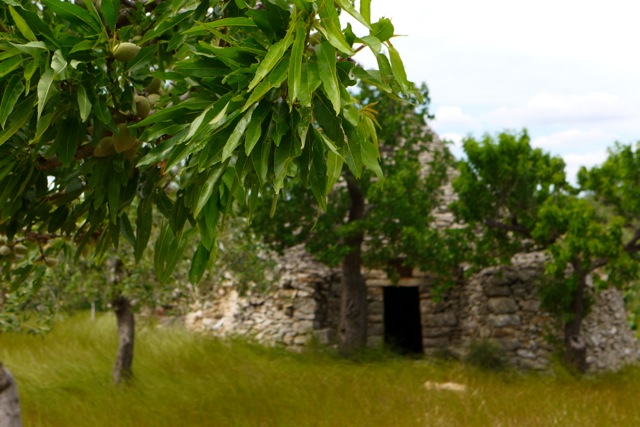 I ate fistfuls of cherries and mulberries, roasted almonds that we smashed with stones to open, accepted bouquets of artichokes, and was soon, too soon, on my way. 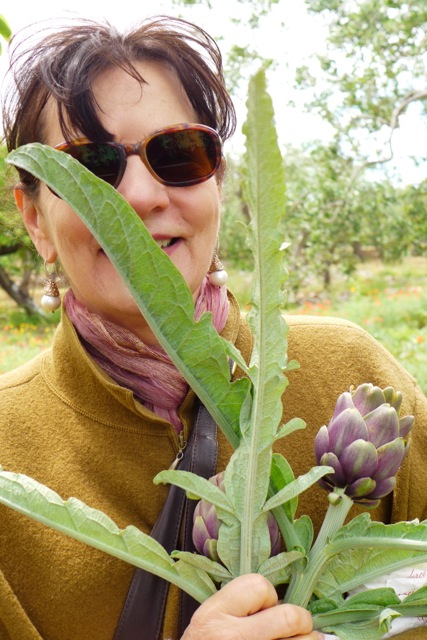 I was sent off with a bouquet of artichokes. | Photo: Nathan Hoyt

Antonio Bartolomeo is the gardener’s name and he sends me messages from my father’s land now and then, like this one, in time for Father’s Day. Have a happy one.

25 Responses to “Toritto, Puglia: An Afternoon in My Father’s Land”