NOTE: FOR SOME REASON, THE FIRST PART OF MY LAST POST EVAPORATED IN CYBERSPACE AS IT WAS ON ITS WAY FROM ME TO YOU, SO PLEASE HIT THIS LINK TO READ IT NOW–-AND THEN, COME BACK HERE! 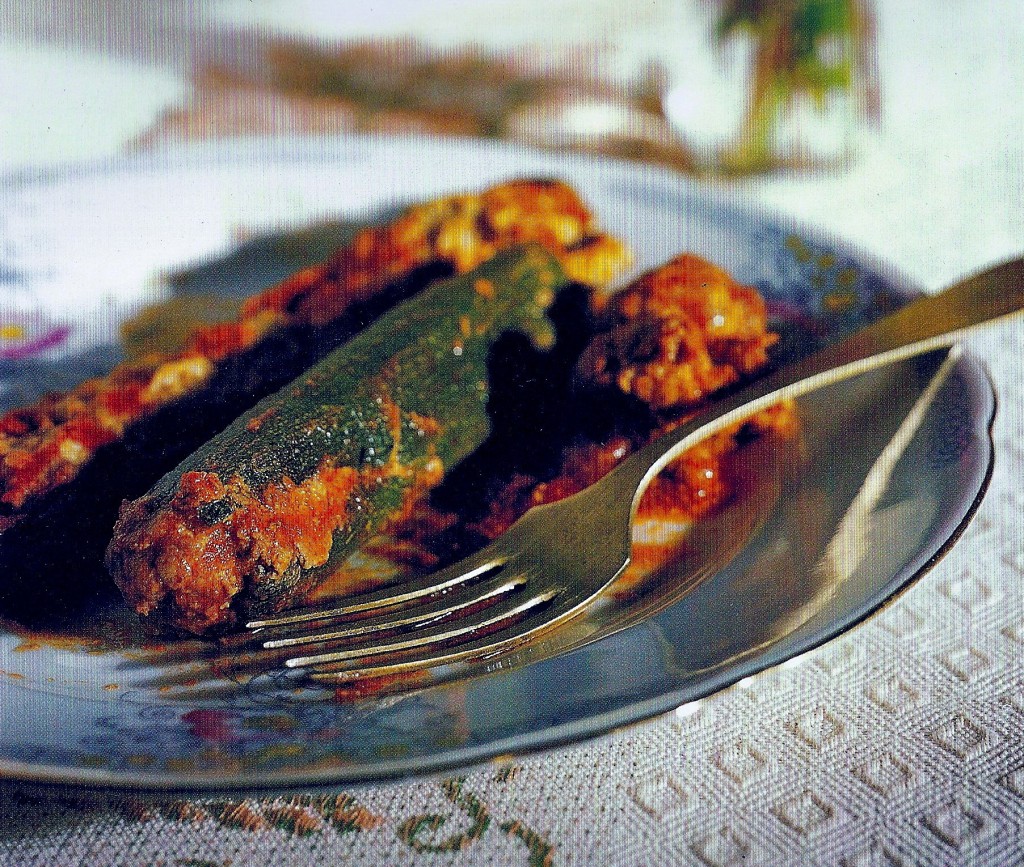 Roman Style Stuffed Zucchini, from Roma: Recipes from In and Around the Eternal City, by Julia della Croce (Chronicle Books).
Photo: Paolo Destefanis

Right, so as I was saying, every August food writers feel compelled to tell their readers what to do about “zucchini fatigue,” as my NPR radio host called our zucchini abundance only yesterday while interviewing a couple of food experts and myself about “the problem.”  The first interviewee speaking on the program, a fine cook and fellow cookbook writer, accused the poor vegetables of growing so aggressively that they “might come inside and kill us in our sleep”!

Well, if they look like the weightlifter heaving the 120-pound squash in my previous post, it’s no wonder.

Another fellow guest, a meat-loving chef with a restaurant in Montana, told us to take “large” zucchini slices, throw them on a hot grill, barbecue them, and arrange them in between slabs of bloody steak.” “If you don’t like it,” he adds at the end of the segment, “you can throw the zucchini away!”

Really? Throw our vegetables away? Good God! If you hear me shrinking away on the radio interview, you’ll know why: I really didn’t want to tell you that this blessed food we have in such abundance is a “problem.” No, indeed, it’s a blessing. As I say in the recent articles on my blog and in Zester Daily, you know how I feel about zucchini–they’re at their best when you rob them from the cradle, so to speak. If we pick ’em small, they’ll never grow so large that we won’t want to eat them. To prove my point, I offered a terrific family recipe to listeners, which you’ll find at the end of this post. 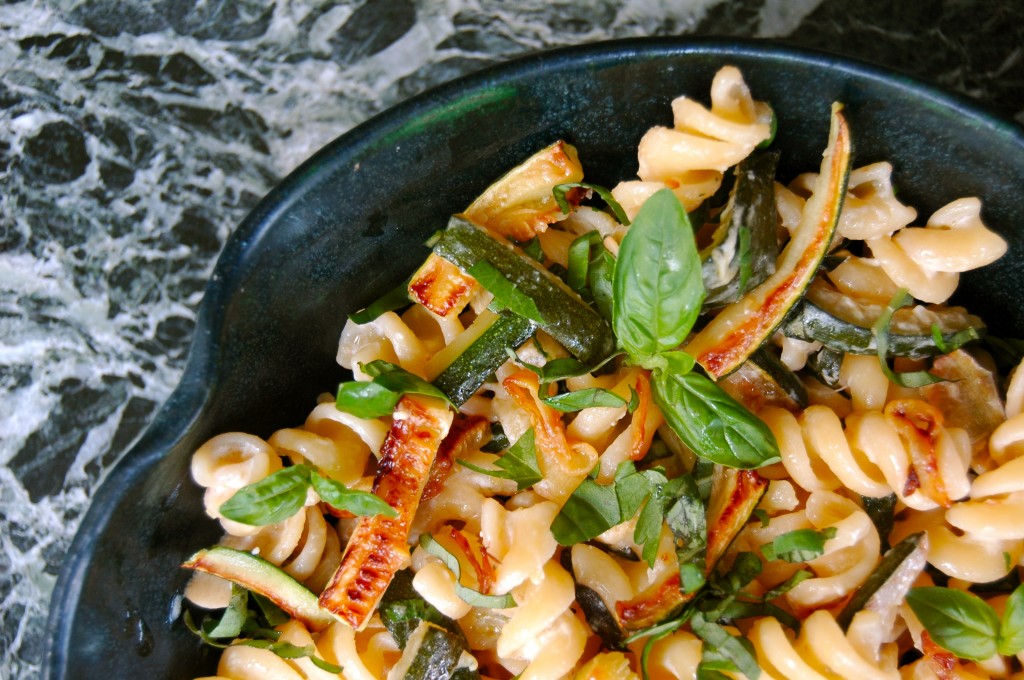 After hearing myself on the radio in the midst of the squash racket, a lovely letter arrived from Sean Sullivan, a talented home cook who has a popular blog. This is what he said, first about my advice not to undercook vegetables and second, another quick way to cook zucchini,

Amen to “al dente is for pasta” under cooked veggies. While not quite nasty, they aren’t very nice either. My Little Italy born-and-raised friend’s filetti di zucchini couldn’t be easier: sliced into coins, browned until blistered on both sides in an oil-slicked skillet. Delicious.

He even sent a photo the next day: 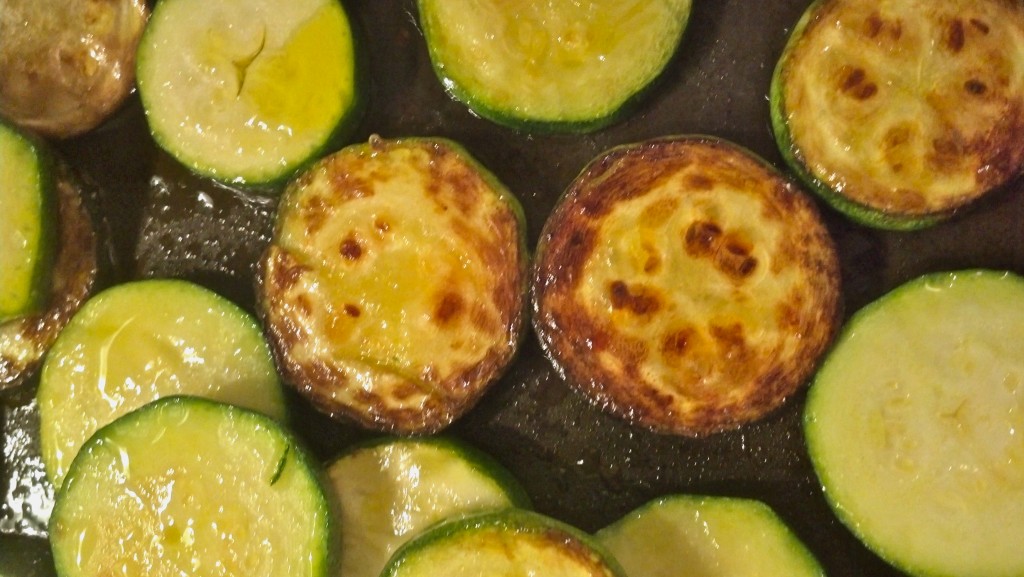 For the whole story about Italian zucchini secrets, continue reading my new article in Zester Daily.

Fusilli with Zucchini and Goat Cheese

This lovely recipe, my aunt Rita’s is fast and easy. To begin with, it’s very important is to use small, tender zucchini, not overgrown ones that are tough-skinned and seedy with watery flesh. Older zucchini won’t caramelize when you saute them because they’re too wet. Also essential is to reserve some of the pasta cooking water before draining and add it to the pasta when tossing it with the sauce; the fusilli need to be dripping wet, and then some, to loosen up the goat cheese for a nice creamy texture and proper coverage.

Small zucchini, each 6 to 8 ounces to total 3 lbs, stems trimmed and skin on, cut into thin matchsticks

In a large pot over high heat, bring 5 quarts water to a rolling boil.

In the meanwhile, in a wide-bottomed skillet ample enough to saute the zucchini matchsticks without crowding, warm the olive oil over medium-low heat. Add the garlic and cook, stirring until fragrant but not colored, about 1 minute. Raise the heat to high, add the zucchini and cook, stirring often, until lightly browned, about 8 minutes. Remove the pan from the heat and immediately add the goat cheese and 1 teaspoon sea salt, using a wooden spoon to blend the cheese with the zucchini.

To cook the pasta, stir it and the 2 tablespoons kosher salt into the boiling water. Cook over high heat, stirring often, until the pasta is al dente, according to cooking time recommended on package instructions. Drain the pasta, reserving 1/2 cup of the cooking water. Add the pasta to the skillet with the zucchini-goat cheese mixture and mix in the parsley, basil, and pepper. Add a few tablespoons of the cooking water, or more, if needed, to prevent the pasta from clumping and to loosen the sauce. Cook briefly over low heat to blend the flavors. Serve at once.

4 Responses to “The Squash Racket”