If you had a look at Mark Bittman’s recent New York Times column about potato gnocchi, this post is for you. Mark and I are old friends from his Cook’s magazine days when we worked on some stories together. Since then, you and I have seen him on a dazzling journey in the world of food. He’s no slouch when it comes to cooking Italian. But about gnocchi specifically, and his recent article with Mario Batali… some input and insights—I’ve been on my own journey with the little dumpling. 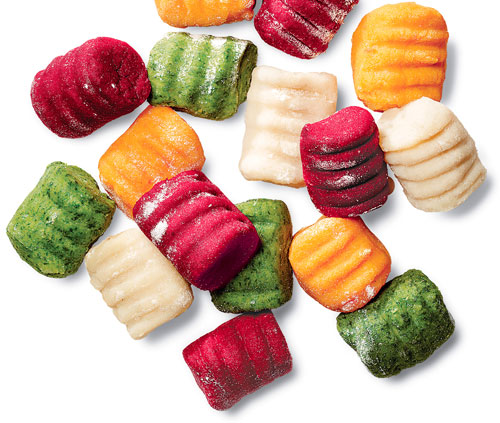 Continue reading and you’ll find how my own potato gnocchi (gnocchi di patate in Italian—pronounced NEE-AUCK-KEY) have evolved from the traditional recipes in a few ways. Like Mark and Mario and many inventive modern chefs, I might make them of a different color. 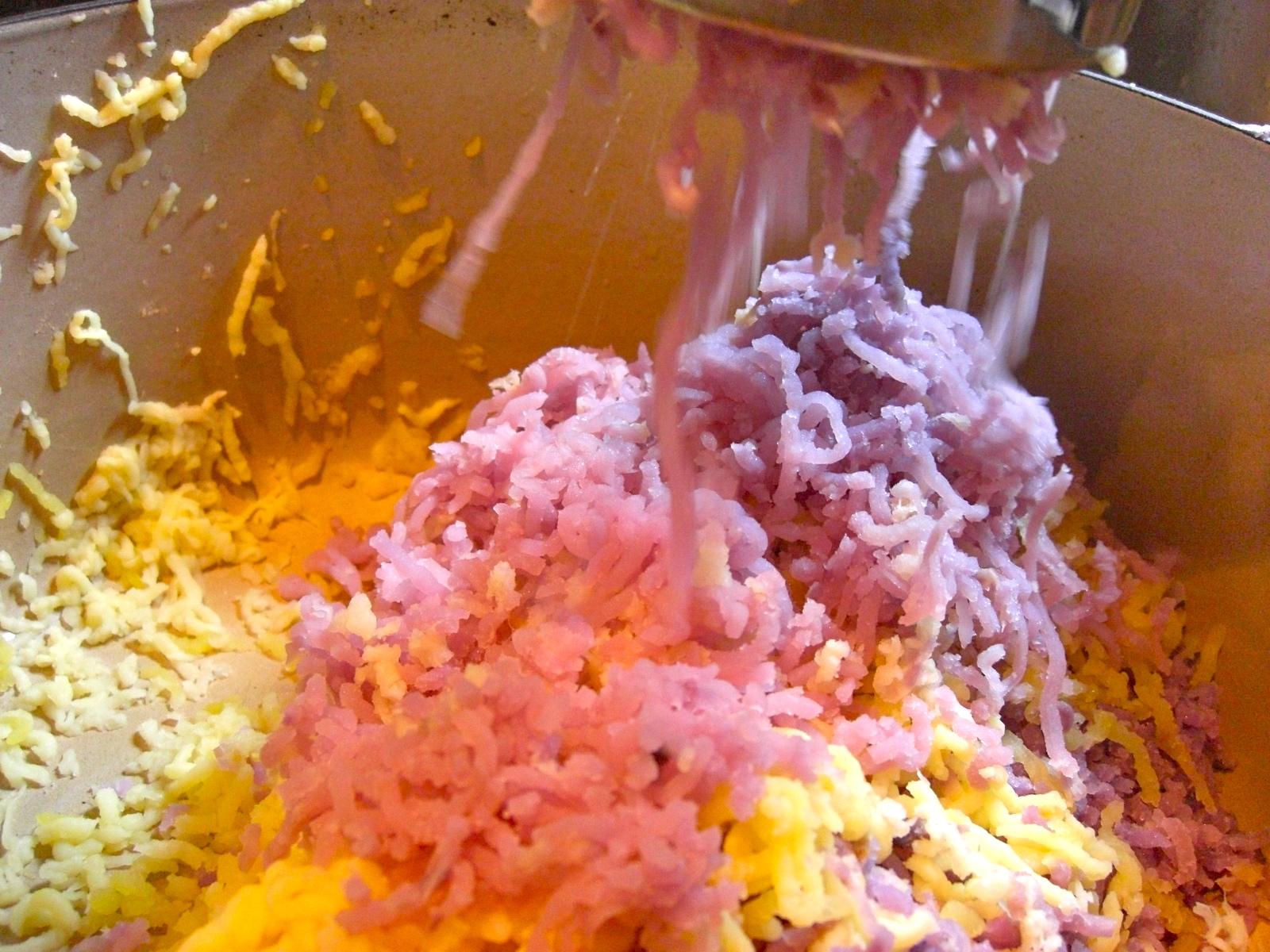 But I’ve stuck to tradition in one way—I always hollow out the little dough cylinders to ensure that the dumplings are as light as they can be.

Anatomy of a potato gnocco (note the singular for “gnocchi,” the plural)

Before potatoes were introduced into Italian cooking, gnocchi were made of flour and water—let’s say that t’was was a heavy affair. 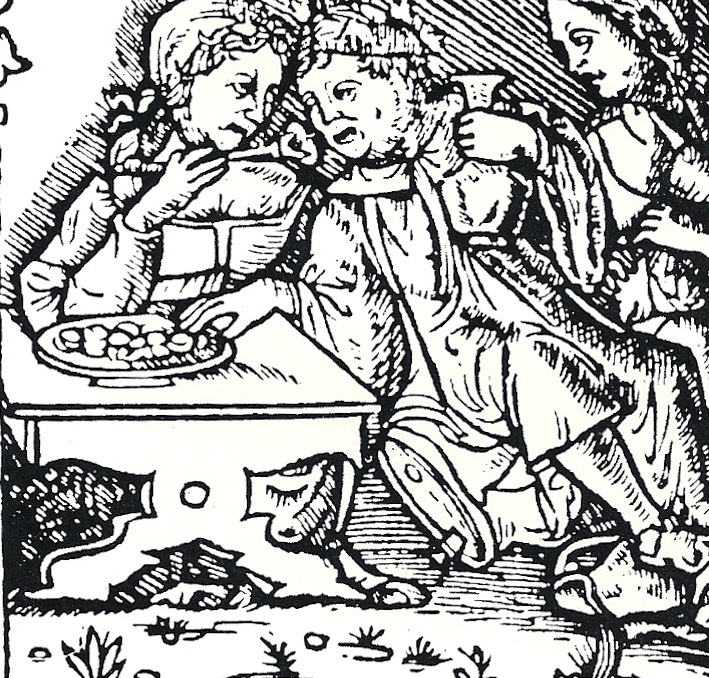 Here’s the first prototype recipe for potato gnocchi, written by the Celestine monk and chef-philosopher to the Bourbon courts of Naples, F. Vincenzo Corrado:

Bake the potatoes in the oven and scoop out the pulp, which should be pounded along with a fourth of its bulk of hard-boiled egg yolks and with as much veal fat and ricotta cheese. Add several beaten eggs to bind the mixture. Season with spices and divide the mixture into small pieces half a finger long and as thick. Dredge the pieces in flour and boil over high heat for a short time. Sprinkle with cheese over the dish and serve with meat sauce. –Treatise on Potatoes, 1801 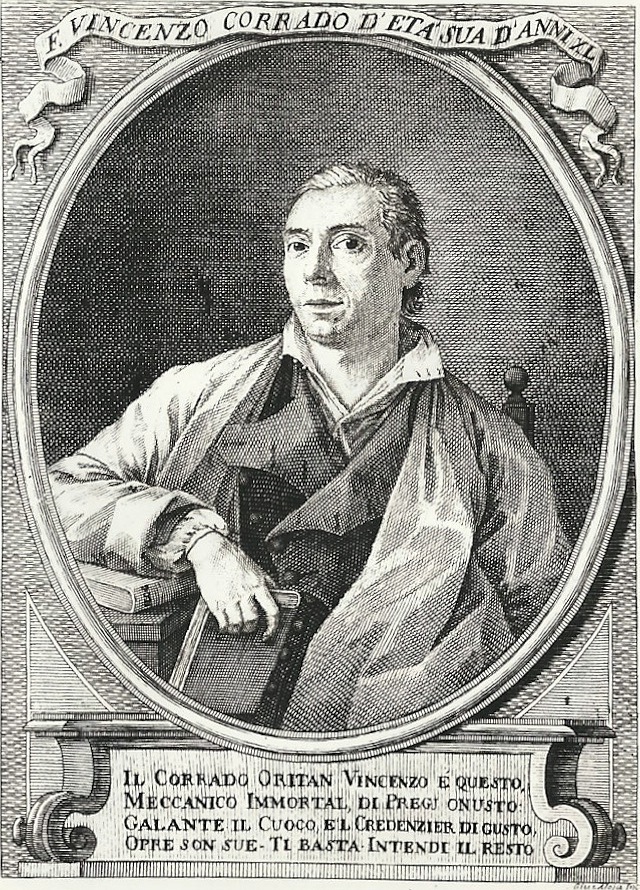 Mark’s master recipe is another matter, a classic—identical to the streamlined, lighter modern version that you find in Italian culinary bibles like those of Ada Boni, Luigi Carnacina and Luigi Veronelli; in books by Marcella Hazan—and, in all of my own cookbooks. For ethereal and pillowy potato gnocchi, three ingredients are prescribed: starchy-variety potatoes, flour, salt. 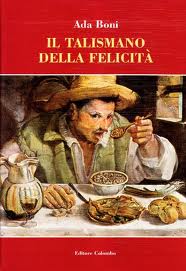 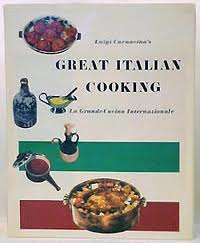 Egg in the dough–or not?

In my first book, Pasta Classica, I wrote,

Most Italian recipes for potato gnocchi call for the addition of eggs, [which] makes the dough easier to work with by binding the ingredients, but also makes it necessary to add more flour to absorb the [added] moisture. The more flour, the heavier the dumplings.

The sans-egg approach is culinary wisdom that’s been handed down for generations; it’s how I saw the Italian grandmothers working in the back rooms of family trattorie across Italy turn out gnocchi; and how the best Italian home cooks and professional chefs alike approached the little potato clouds. 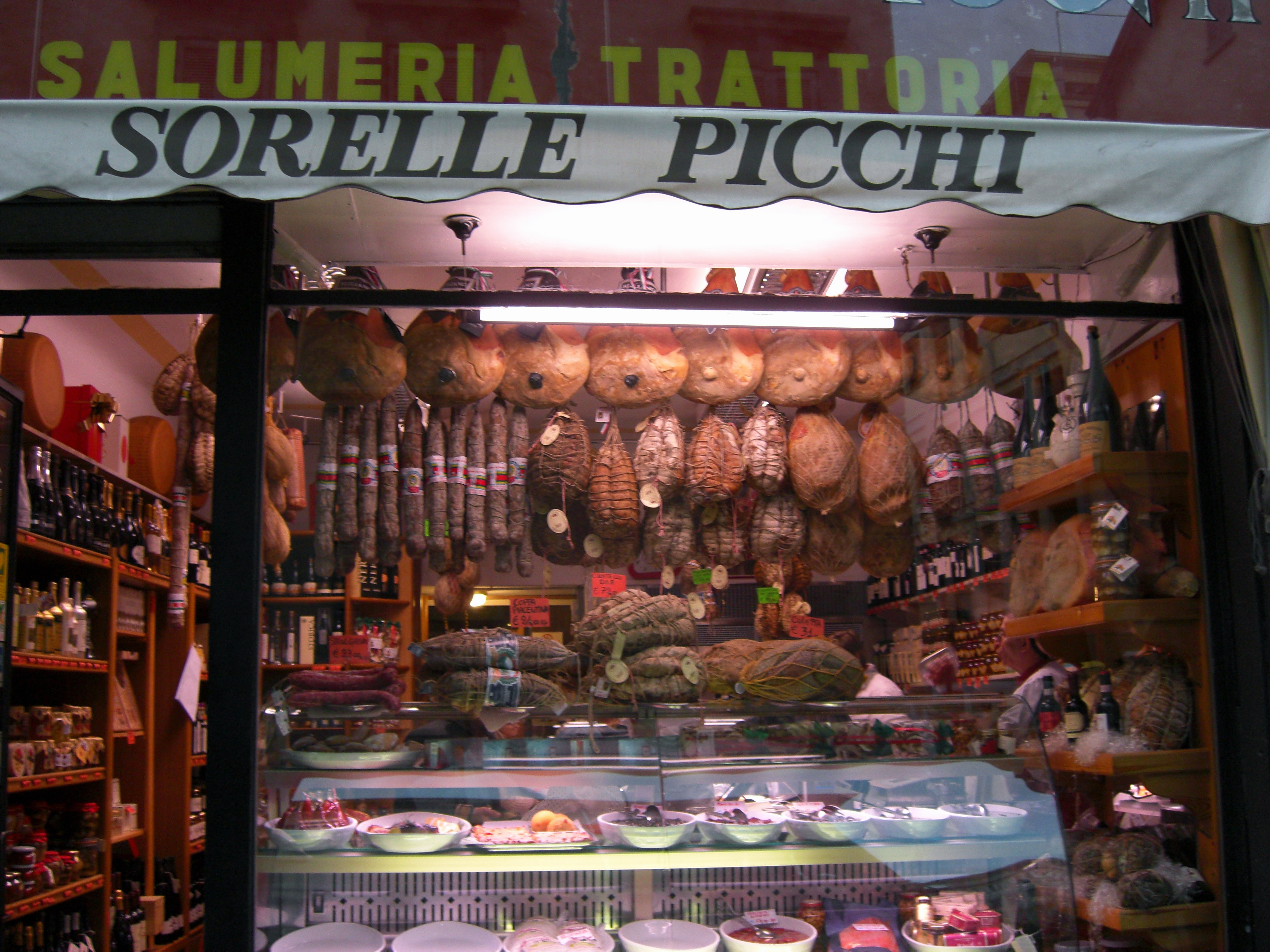 Like at Sorelle Picchi (Picchi Sisters) in Parma, a trattoria I love, where you’ll find the women in the kitchen making the gnocchi. Photo: Julia della Croce.

Today, I eat my words, the result of watching beautiful little potato gnocchi break in the cooking water several years ago on the occasion of my daughter’s birthday. Yes, potato gnocchi, probably my 100th batch made over a lifetime, dissolved into one lugubrious mess. 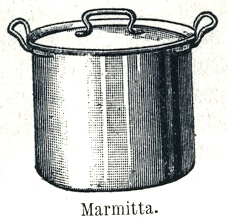 Nothing much has changed since the 1800s in the way of equipment.  A basic: a large, roomy stockpot in which to cook the gnocchi.  This drawing is from Il Cuoco Moderno, by Antonio Barberis, Torino, 1910

Did I skimp on flour in the grip of an obsession to produce the lightest possible gnocchi? No doubt. What of forming and test-cooking one or two (like I tell my students to do) before plowing through the entire ball of dough? Mea culpa. But it was a cruel lesson. Ever since then, I’ve been putting egg in the dough—and liking the results: richer flavor, less floury texture.  And, never again have my gnocchi melted away! 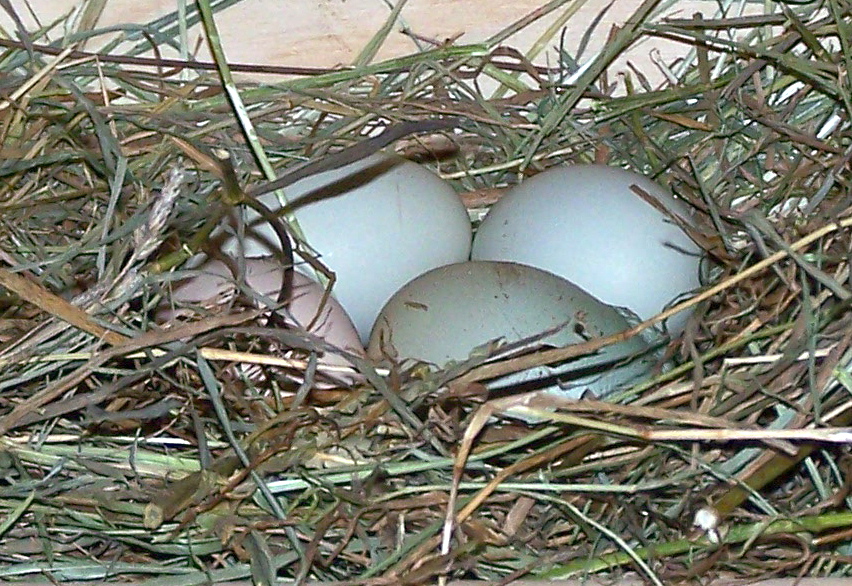 Use the freshest eggs possible, like these little wonders from a local farm. Photo: Susan Freiman, www.NatureWaltzPhotos.com

One more departure from tradition—and another about-face on my own past advice. There are two categories of white potato that all cooks recognize (let’s leave the matter of sweet potato gnocchi for another day). The moist, “waxy” variety like Red Bliss and White Potatoes are suitable for mashing, roasting, and boiling, and for potato salads. The floury type, like Russet or Idaho is what we always told you to use for potato gnocchi. Now I use the Yukon gold variety because it  has such a pleasant, buttery flavor and sunny hue, and I think, a more delicate texture. With the egg worked into the mixture, the dough holds together nicely and the resulting dumplings are less starchy in the mouth.

A departure from tradition: Yukon Gold-type potatoes are now my favorite variety for making potato gnocchi. Photo: Courtesy of the Idaho Potato Commission

Roll a piece of the dough into a rope about 1/2-inch thick, then cut the rope into 1/2-inch lengths. Score each piece by rolling it along the tines of a fork; as each piece is ready, put it on a baking sheet lined with parchment or wax paper; do not allow the gnocchi to touch one another.

HALT! BACK UP! YOU ARE NOT DONE YET!  It’s how you roll out the 1/2-inch lengths of “rope” that creates hollows in the little cylinders. Those ridges you make with the tines of a fork (or a wooden butter paddle, or along the the holes of a cheese grater) are not just for decoration. The dumplings need to be dragged (strascinati [strah-shee-NAH-tee] in Italian) along those tines/ridges/grater holes, then, flipped with the active thumb to hollow them out. The resulting craters in the dumplings serve to thin out the miniature tootsie-roll shapes, making the gnocchi lighter and forming nooks and crannies that will cup little pools of sauce.

So here you have it, the ins and outs of making the lightest, fluffiest little potato clouds ever.  In bocca al lupo, as the Italians say–good luck.  It’s not very difficult if you follow my advice!

Here’s the recipe for potato gnocchi that has evolved in my kitchen–originally published in my first blog post about a year ago. There’s an instructive video and a terrific heritage sauce recipes for topping the gnocchi. Or, if you prefer, for the simplest of all sauces, try this homey, quick and chunky salsa di pomodoro. Besides using it over gnocchi, it’s suitable for dried or fresh pasta dishes.

P.S. Notice anything odd about the photo below, taken at the Williams-Sonoma studio when those recipe testers were making my very own potato gnocchi recipe while I was 1,000 miles away, puttering around in my own cozy kitchen (I’m afraid that’s how it works sometimes in the cookbook publishing world)?  Yup! THEY didn’t hollow out the gnocchi, either. So, Hungry Reader, now you know why I wrote this post! 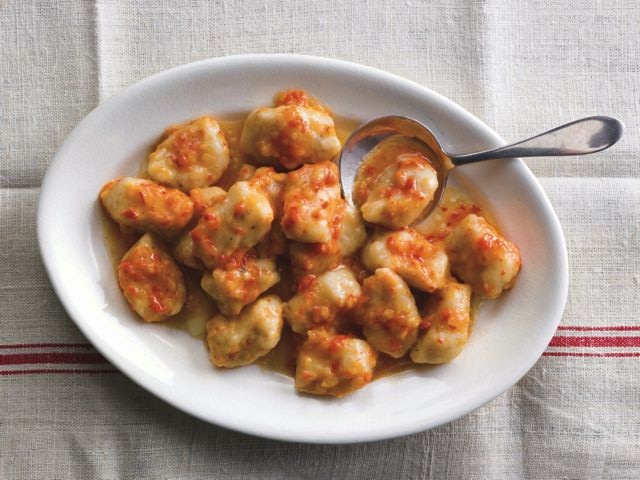 1. Drain the tomatoes, reserving their juice. Using your hands or a potato masher, crush the tomatoes well. Set aside.

2. In a cold saucepan over medium-low heat, warm 2 tablespoons of the olive oil and the garlic together, and sauté until the garlic is soft but not colored, 3 to 4 minutes. Add the tomato paste and stir; then add the tomatoes and their strained juice. Simmer over low heat, uncovered, until enough of the liquid evaporates to form a sauce that will coat a spoon, about 25 minutes. Tear the basil into small pieces and stir them into the sauce along with the salt. Simmer for another minute or two. Remove from the heat and stir in the pepper and the remaining 1 tablespoon olive oil.

Ahead-of-time note: The sauce can be made 4 to 5 days in advance of using and stored tightly covered in the refrigerator, or it can be frozen for up to 3 months. Whether storing it in the refrigerator or freezer, leave out the basil, pepper, and last tablespoon olive oil. Stir them into the sauce after reheating.

16 Responses to “Hey Mark! Whoa Mario! About Those Potato Gnocchi…”