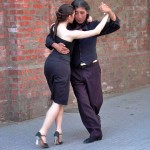 Read up on travel guides to Buenos Aires and eat your heart out. “Incredible food,” they trumpet. “The city sizzles,” one of them blares. “The South American Paris,” gushed a friend when I told her I was going, comparing its cafes to those of Paris, its fashions to Milano style, its nightlife to nowhere else. Most alluring and most true of all of the city’s seductions is the tango, that sultry dance born in the seamy districts of Buenos Aires and Montevideo, which you might very well find on any street corner today while you are in search of dinner (see my husband’s post about this photo on his blog, Imag(e)ination). 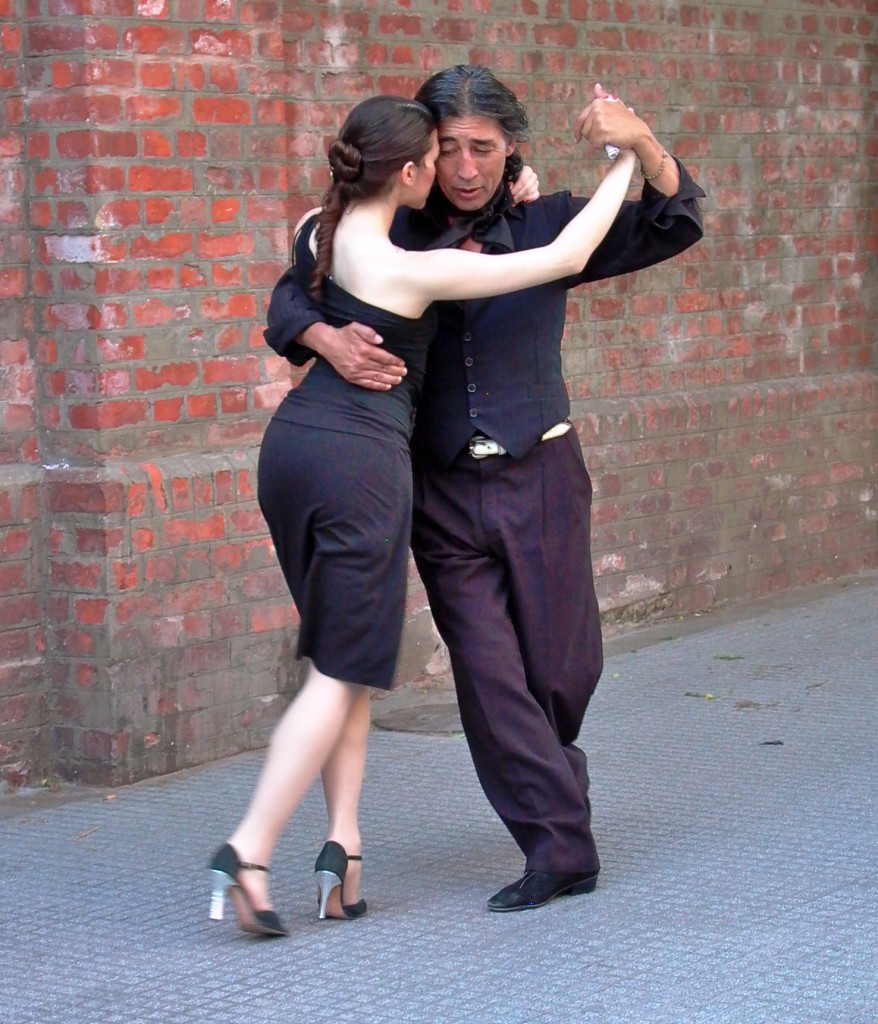 A couple dancing the tango to a boom-box at the walls of Recoleta Cemetery, Buenos Aires. Photo: Nathan Hoyt

So while my family and I were in the city for an extended stay visiting my daughter, who’d landed there for her junior year abroad, we walked the streets every day in search of dinner. 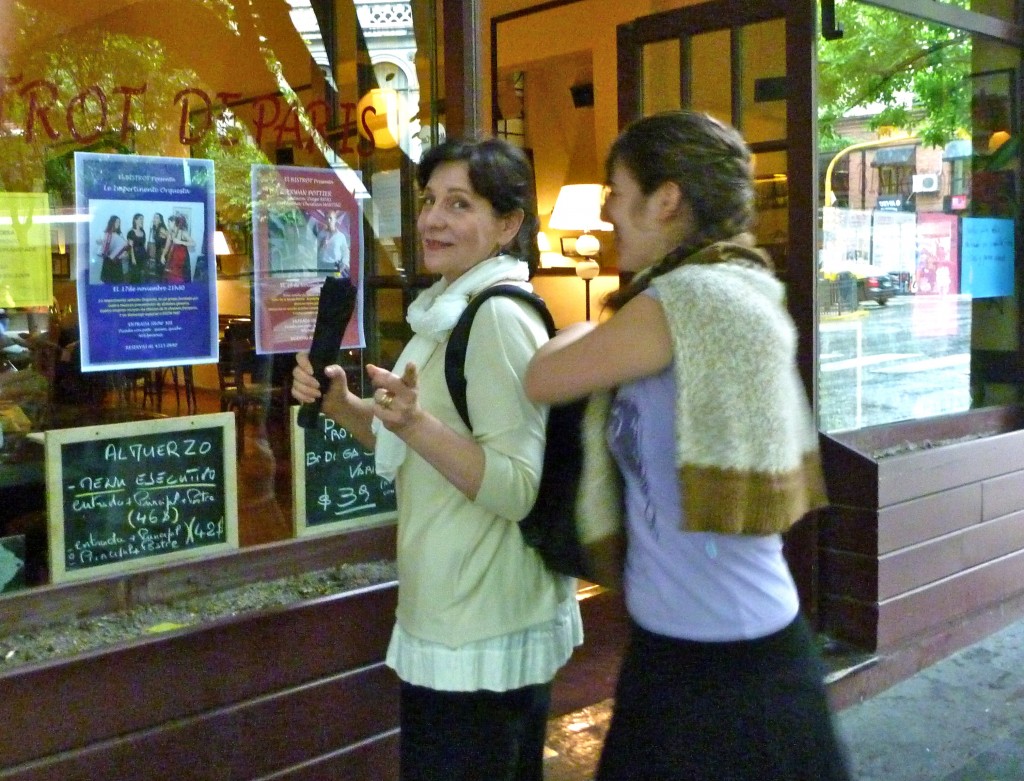 In search of dinner with Celina in Buenos Aires. Photo: Nathan Hoyt

My girls were content to subsist on empanadas, a meal in a pastry envelope fit for the grazing student and the peckish traveler. Probably few people love a good empanada as much as I do (in Sardinia, my mother’s homeland, these moon-shaped pies, a legacy of 13th century Catalan settlers, are called impanade). I could eat them for breakfast, lunch or dinner. But after a few samples procured from vendors all around the city, I gave up.  These were not like the succulent versions that Señora Rosenda, Celina’s campesina host mother had made out in the northern countryside, but tough pastries with mediocre fillings. Such is the fate of most pies that are not made in small batches and with a loving hand, whatever their ilk or hue.

So the search for dinner began in earnest. First, a quest for native food, which on the tourist trail is no more and no less than beef and plenty of good Malbec: a challenge for my daughters, transitioning vegetarians, and for me–we all eat red meat sparingly. 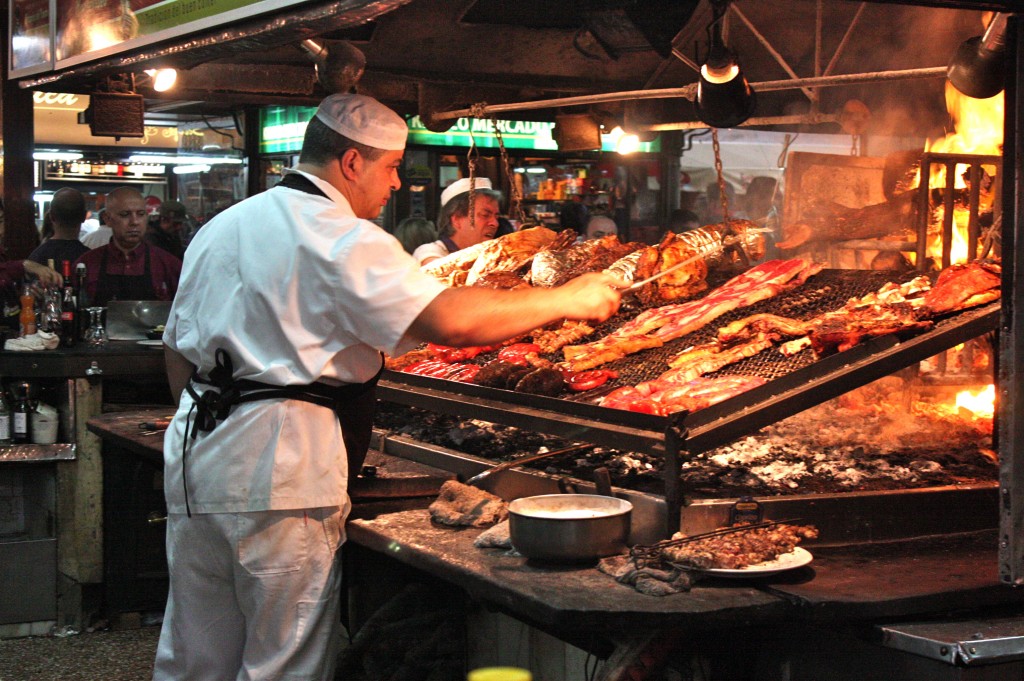 From trendy “Palermo Soho” and ragged San Telmo, to swank Recoleta and the glamourous Puerto Madero hotels built for foreign businessmen and visiting plutocrats, the gritty waterside snack shacks and touted parillas of Argentine fame, Celina’s student hang-outs and ethnic eateries, we covered every neighborhood and rode the trains to the outlying suburbs for a gasp of fresh air when we could. Along the way, we saw the real Buenos Aires, slick and raw, modern and decrepit, fat and starving, remembering and amnesiac. 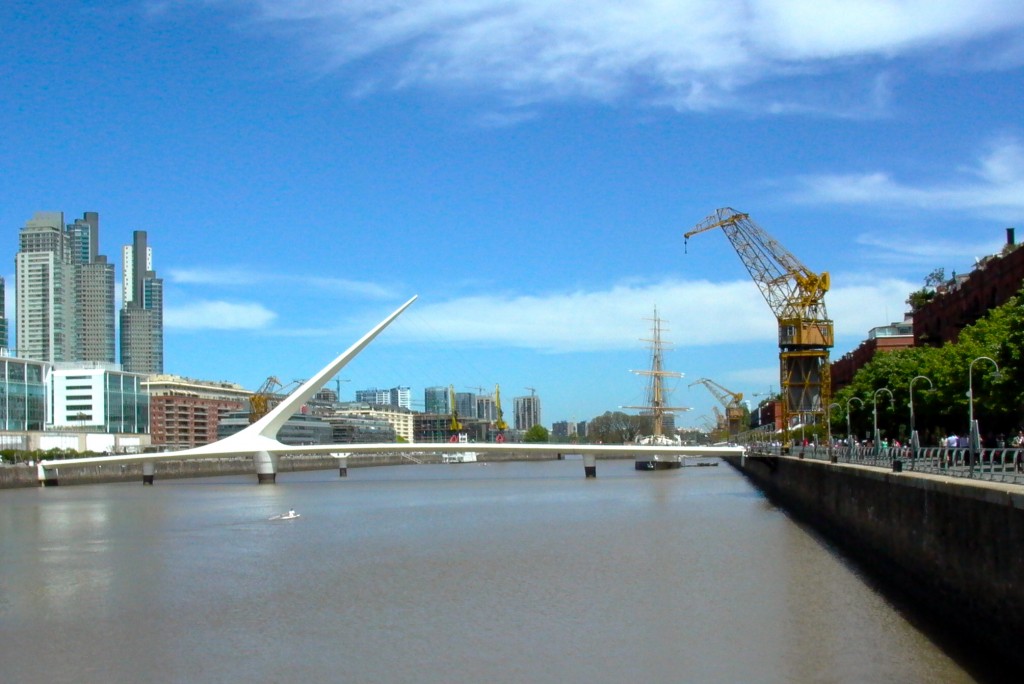 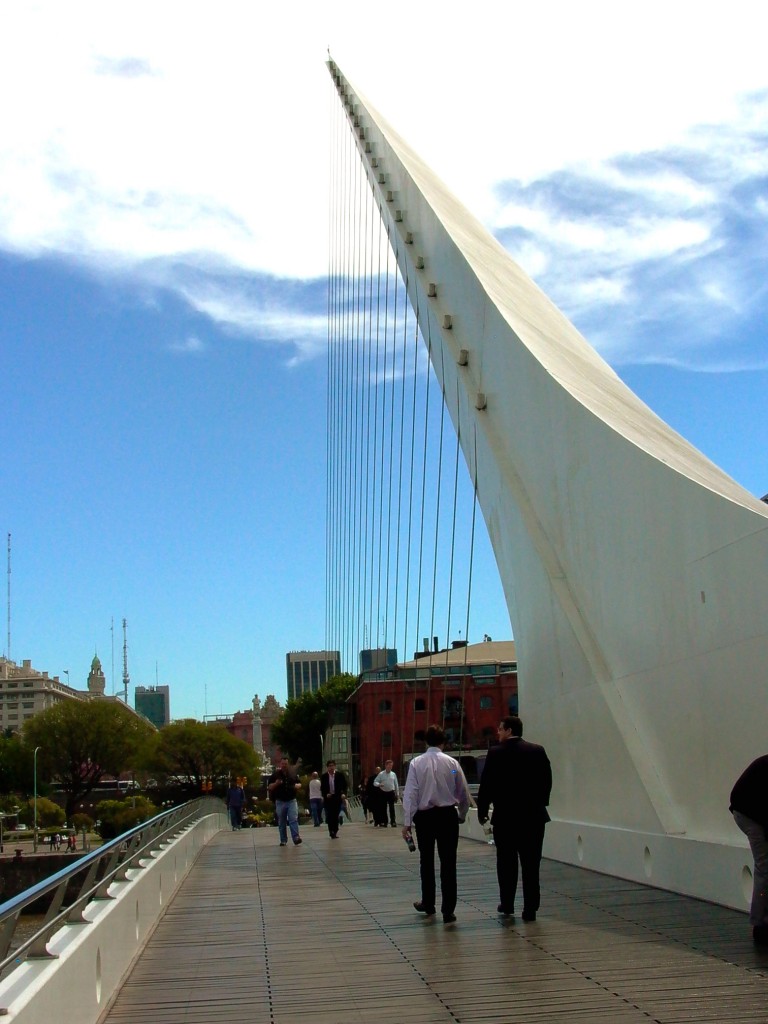 The bridge is built in three parts, one, a single mast with cables suspending a section that swings 90 degrees in order to allow ships to pass underneath it; the two static sections connect to pedestrian walkways on either side. Photo: Nathan Hoyt 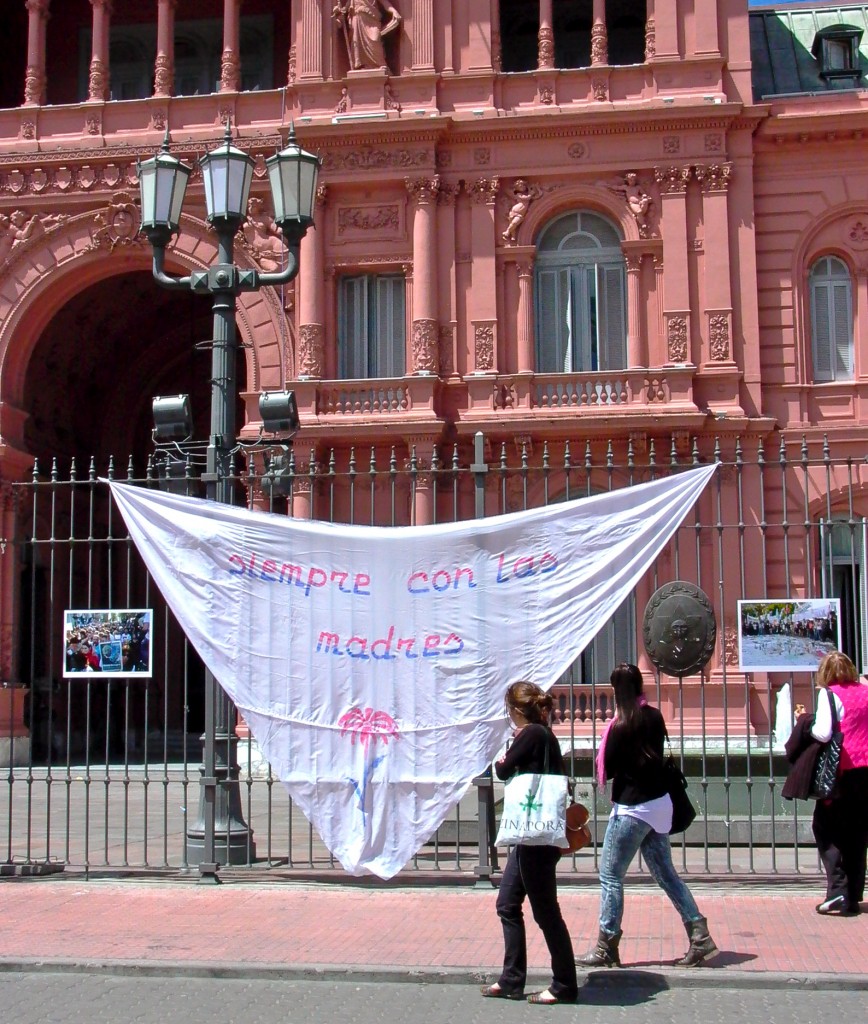 Argentina’s painful past is papered over with tourist publicity. But at La Casa Rosada, the presidential palace, a banner: “The Mothers Always Remember.” Photo: Julia della Croce

The pasta and pizza joints on every block turned out the saddest facsimiles of those iconic Italian dishes that I’ve tasted anywhere; indeed, much to my surprise, anything Italian was only a memory of the real thing (but didn’t Italy empty out its southern and northern regions to Argentina, and with them, their storied cooks in the 19th and 20th centuries?)–not delicious in its own right, like the best of Italian-American food can be. 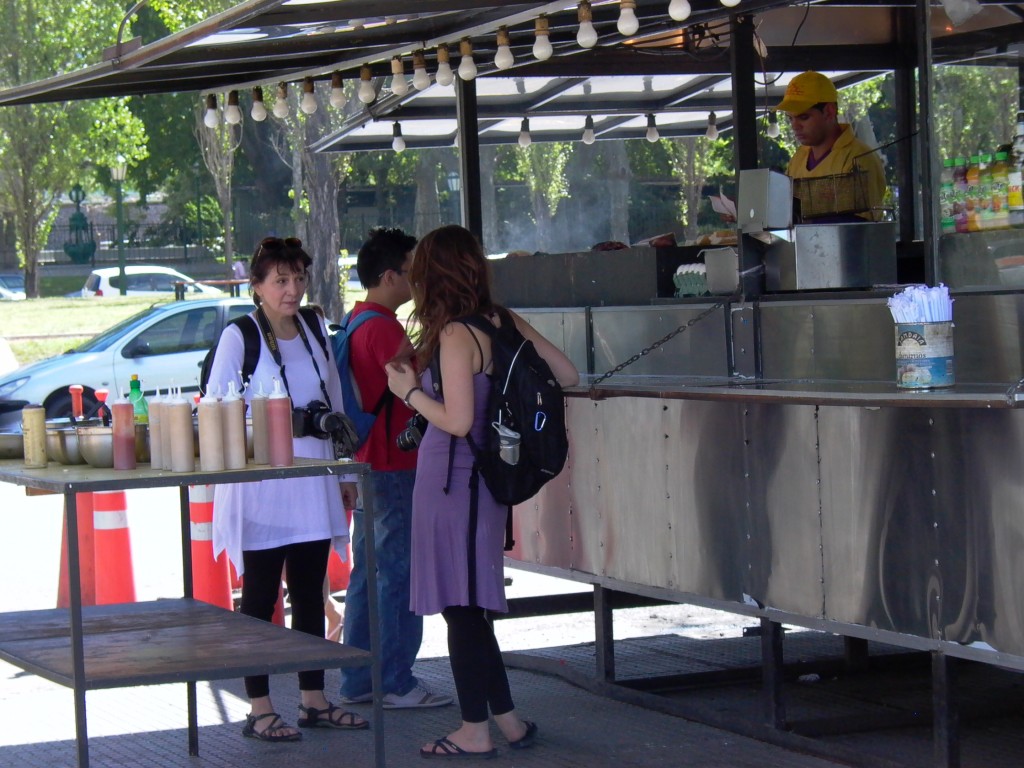 Here we are negotiating some street food at one of Celina’s watering holes. Photo: Gabriella della Croce 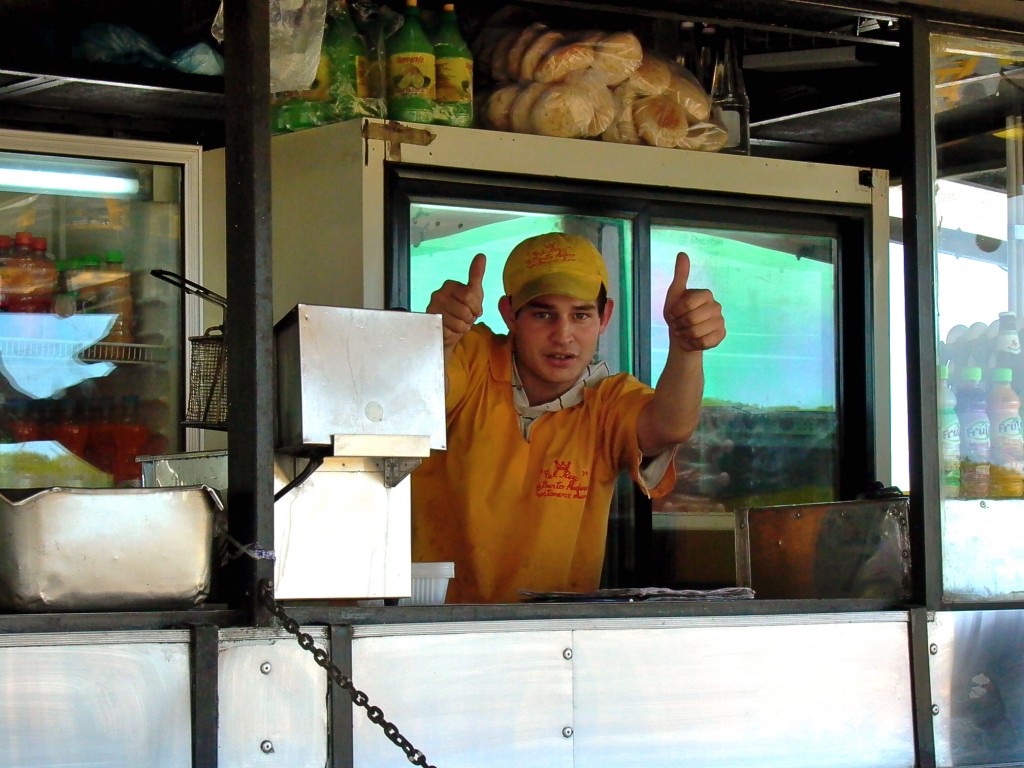 We savored good food when we found it, lit on the cafes for pastries and cappuccino, and hit the gelaterie at snack time. Happily, Fabbri, the fabled Italian gelato and confection company recently opened a satellite company in Buenos Aires. 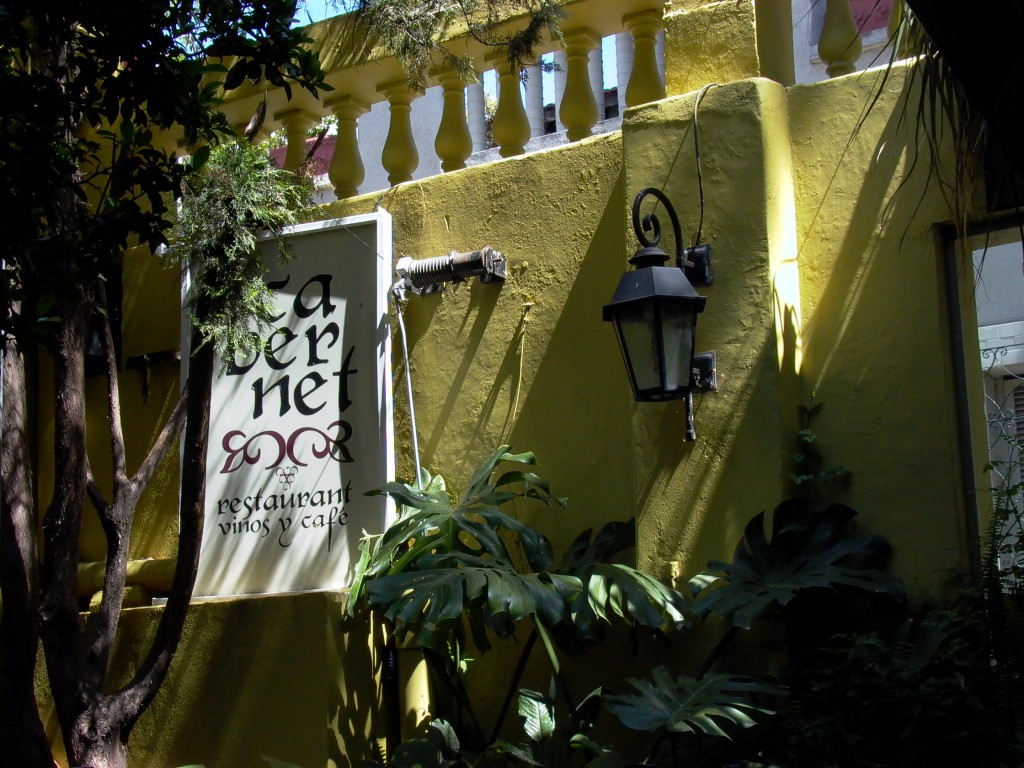 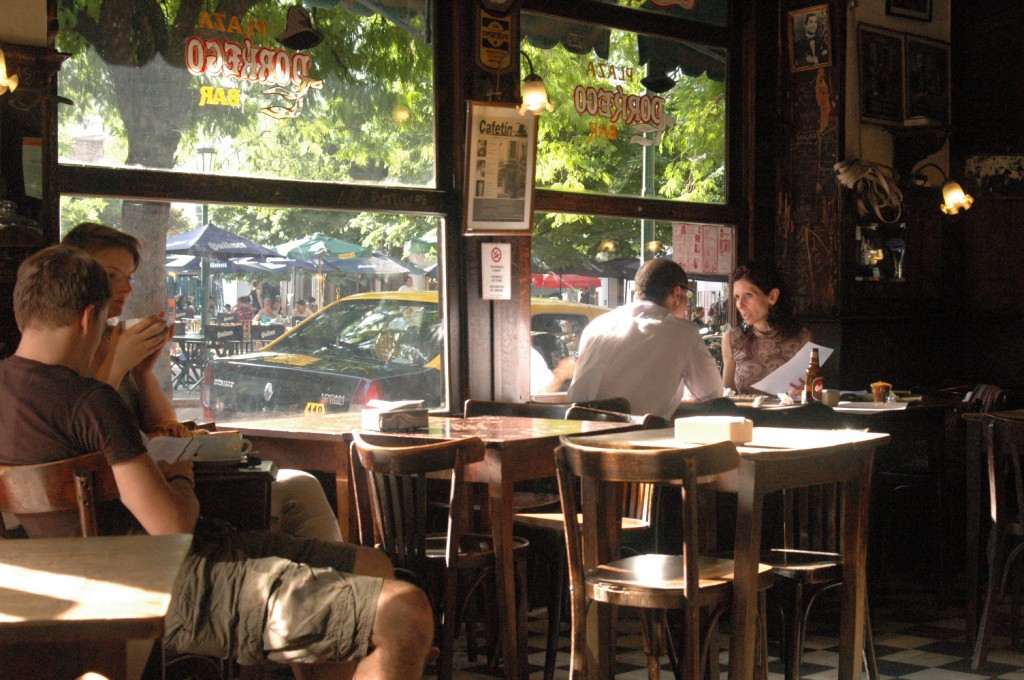 But in the end, I got hungry. The best food, my daughters decided–Italian or otherwise–was home-made. So after working up a good appetite and feasting on the city’s sights, we usually rustled up the makings of dinner from the butcher, the baker, and the greengrocer, and landed in my rental apartment for home cooking-away-from-home. 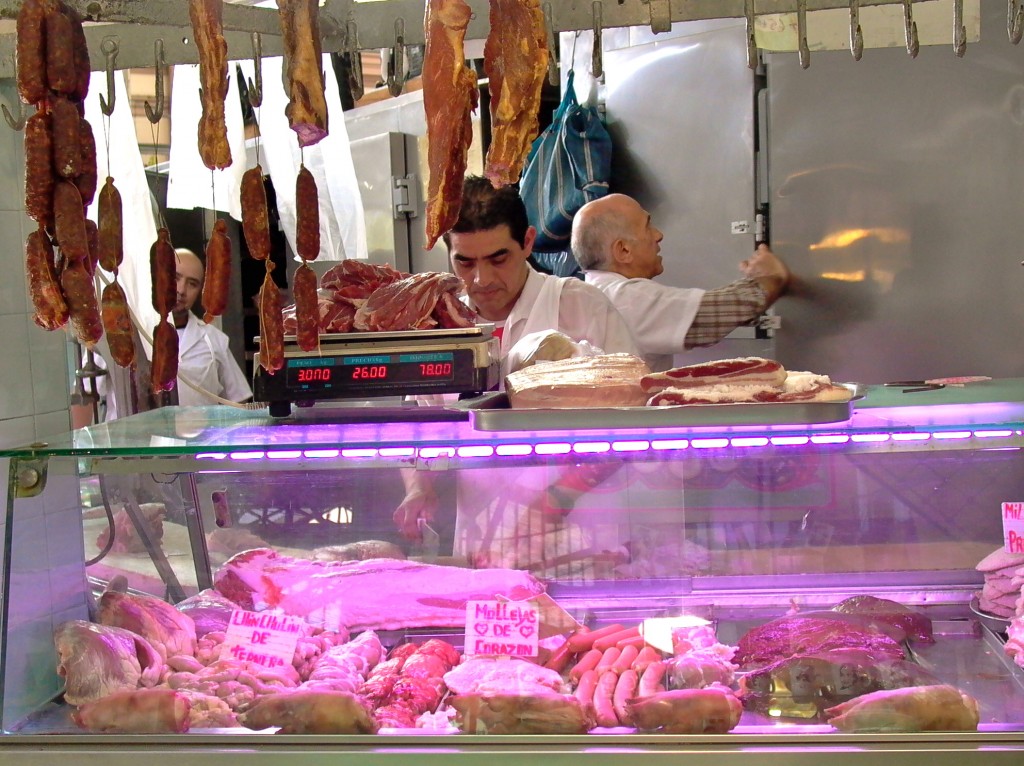 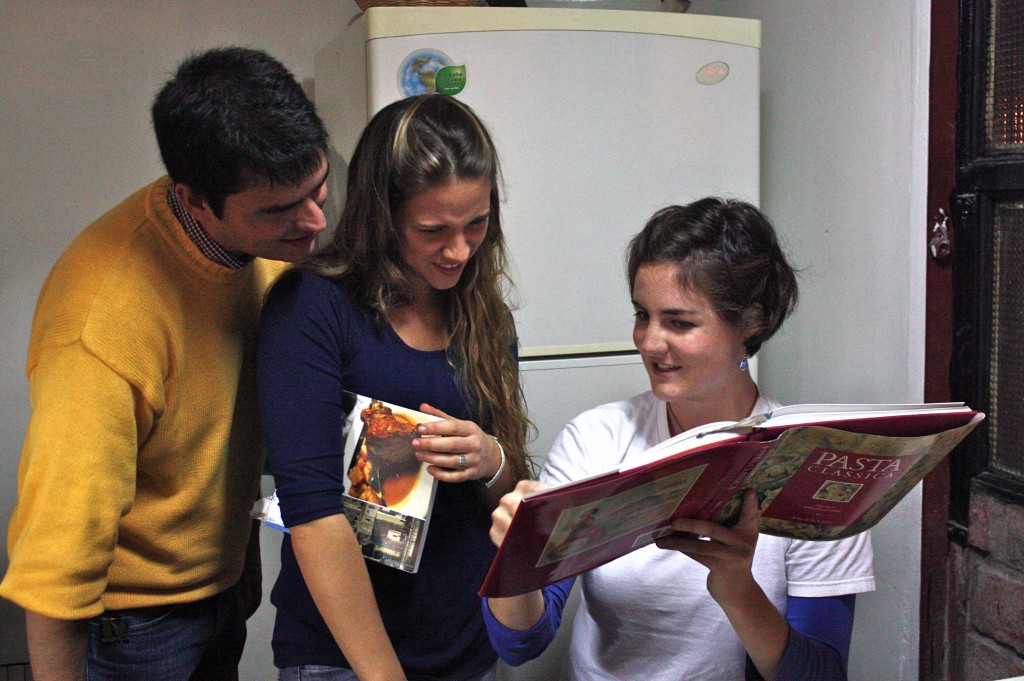 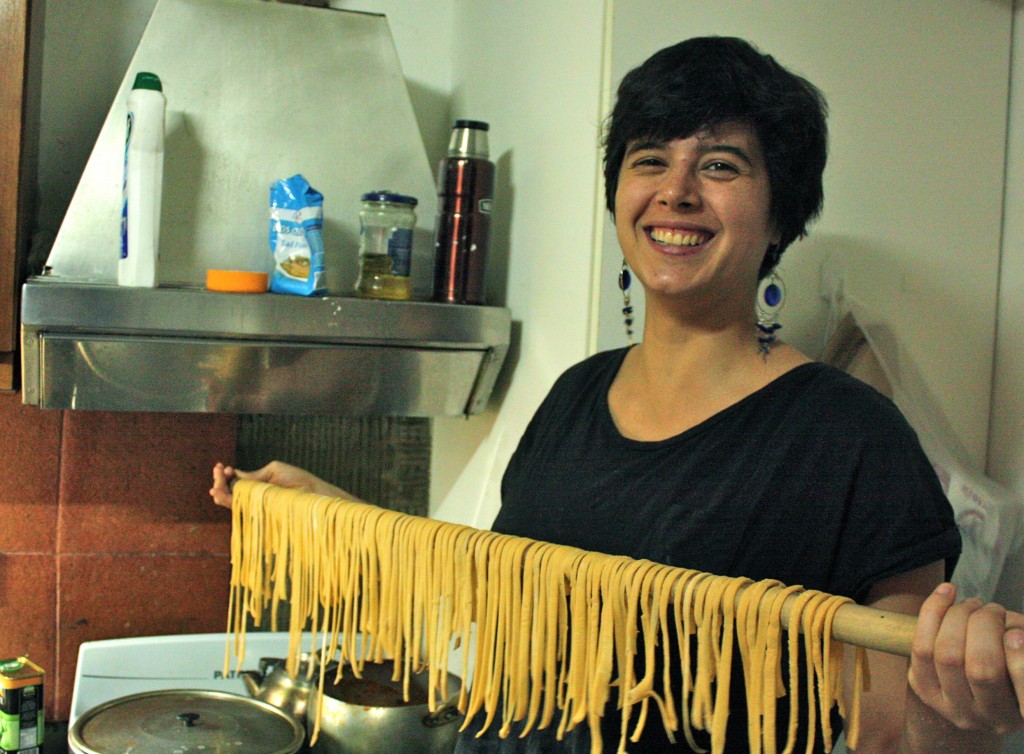 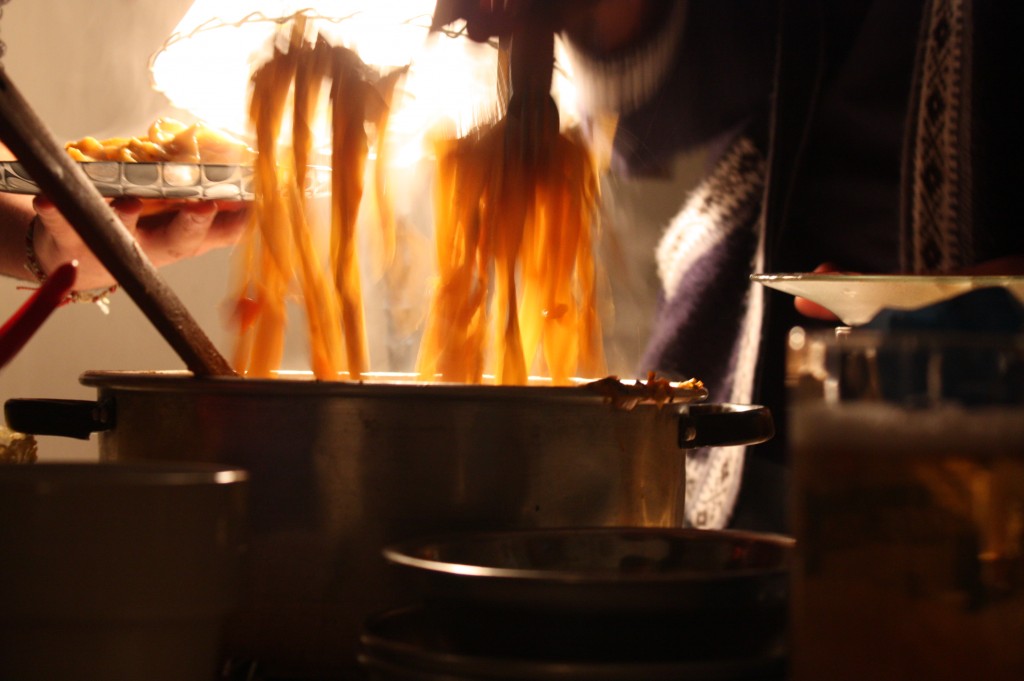 But ask me about Buenos Aires and I’ll tell you that the greatest pleasure it offers is tango. Nothing could be more spicy, sizzling, and authentic. Take dance lessons, go to night clubs, or just inhale it on the streets.

If you can’t get yourself some good home cooking while you’re there, here are my well-earned finds:

Cabernet, at Jorge Luis Borges1757 (Palermo)–An upscale Argentine restaurant in a restored colonial-style building with an eclectic menu leaning toward Italian food; elegantly decorated but best of all, you can dine in the lush courtyard scented with overhanging jasmine, cockspur coral, and gardenia.

Don Julio, at Guatemala, 4691, and Gurruchaga (Palermo Soho)–One of the tried and true parilla restaurants considered among the best by in Buenos Aires locals. Legendary for its steak, but don’t miss the sausages.

21 Responses to “Travels with Julia: Tango Hambre–Working Up an Appetite in Buenos Aires”