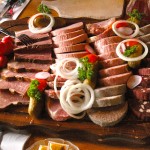 Travels with Julia || Southern Germany Traveling through southwestern Germany recently, I thought I could have been in France or Italy’s wine-growing regions. But then, Baden-Württemberg (the two states merged to form one in 1952), the region’s official name, was once in the duchy of Swabia, a swathe of land that included parts of France and Switzerland. Today, it shares its borders with both countries and the French connection endures. There are nine Michelin-starred restaurant-hotels in this important fruit- and wine-growing region and they are all family-owned (as such establishments have been for centuries–tradition is important here). But if the chefs […more…]