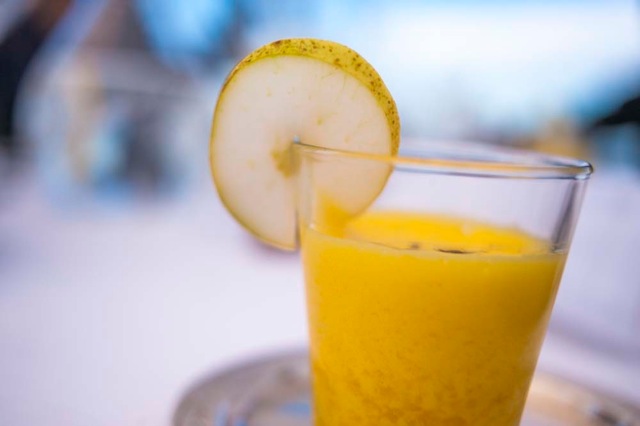 Zabaione alla veneziana with pear and chocolate shavings, on board the Eolo. | Photo: Copyright Paolo Spigariol, 2016

This is a shortie, but it occurred to me to pass this festive little recipe along to you all for ushering in the first day of 2017. It’s from my Venetian friend Mauro Stoppa, host and skipper of the Eolo, who learned it from a local contessa and well-known cooking teacher, Fulvia Sesani. He serves this liquorous treat on board when the weather is nippy, and of course, during the winter holidays. 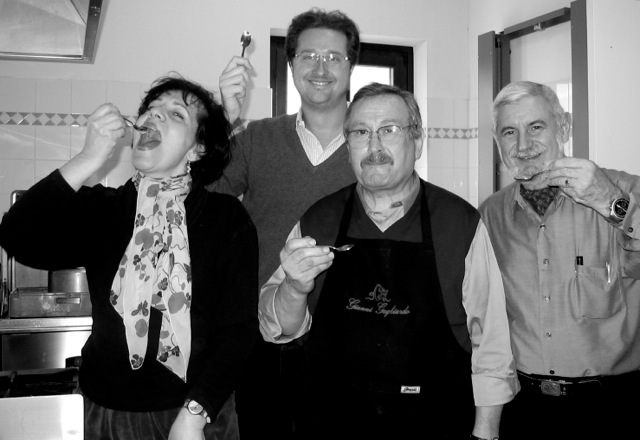 Whipping up some zabaione with my fellow gluttons in the kitchen of Gianni Gagliardo Vineria di Barolo, Piemonte, a few years back. Sorry, I don’t remember names, except for Bill Marsano’s, far right.

You could say that zabaione is Italy’s answer to eggnog (which some etymologists place in the Middle Ages), except that its origins go back at least as far as the late Roman period, to a drink called “sabaja,” a type of beer enriched with egg and liquor. Piemonte claimed it as its own after a cook for the 16th century king Carlo Emanuele I figured out how to cook it without scrambling the eggs. 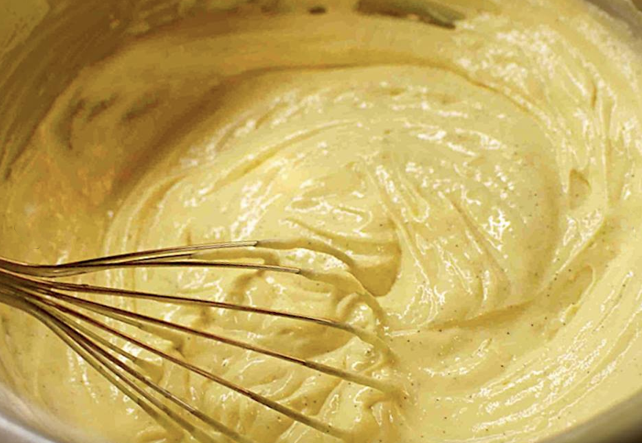 Whisking the ingredients together over a double boiler. | Photo: Courtesy of Veneziani a Tavola

Beaten yolks, sweetened, spiked with liquor, and whipped until it is pale and billowy is warmed over a gentle bagnomaria (“bain-marie” or double boiler) has become universally Italian, whether it is fortified with Madeira, Marsala, passito, vin santo, rum, or some other spirit. Mauro Stoppa makes it the Venetian way, using Prosecco, the way the contessa taught him.It’s ideal as a salsetta for biscotti, or as a filling for spongecake. Here’s the recipe. 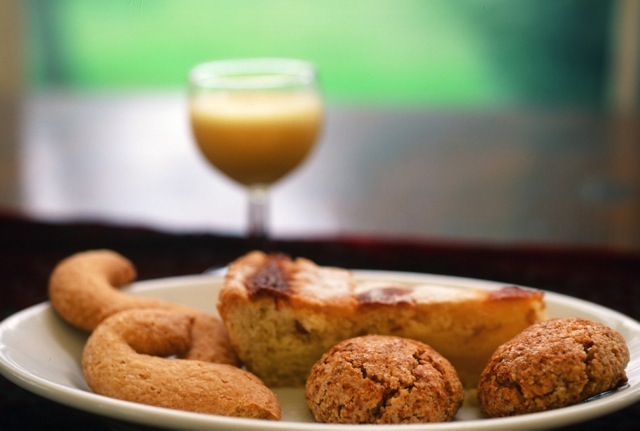 1. Fill the lower half of a double boiler with enough water to warm the insert, making sure that it doesn’t reach up as far as the bottom of the pan that will be placed over it—this is critical to prevent the yolks from cooking, and also to release the aroma of the Prosecco. (If you don’t have a double boiler, simply use a saucepan and with a stainless or copper bowl positioned over it).

2. Working over the insert of the double boiler or the metal bowl off the flame, crack the eggs, emptying the yolks into it and discarding the egg whites (better, set them aside for making meringues or for some other purpose). Add the sugar.

3 Bring the water to a simmer over medium-low heat and using a whisk or a hand electric beater, whip together until the mixture becomes pale and foamy. Keep in mind that if the flame is too high, the eggs will cook rather than froth, and you’ll have to start over from scratch. Beat in the Prosecco to blend.

4 Pour the zabaione into the individual serving glasses or goblets. If using pear slices, fix them onto the rim of each glass. Sprinkle the zabaione with the chocolate. Eat warm or cool. Serve with biscotti, or not.