If you’ve been following my posts this month, you know that I’ve been in Italy at the invitation of the Italian Trade Commission exploring the products of food artisans working in the country’s twenty regions. Throughout May, I’ll be publishing vignettes on some of the food producers I met, both at the 78th annual artisans expo in Florence in April, and subsequently traveling throughout the country. 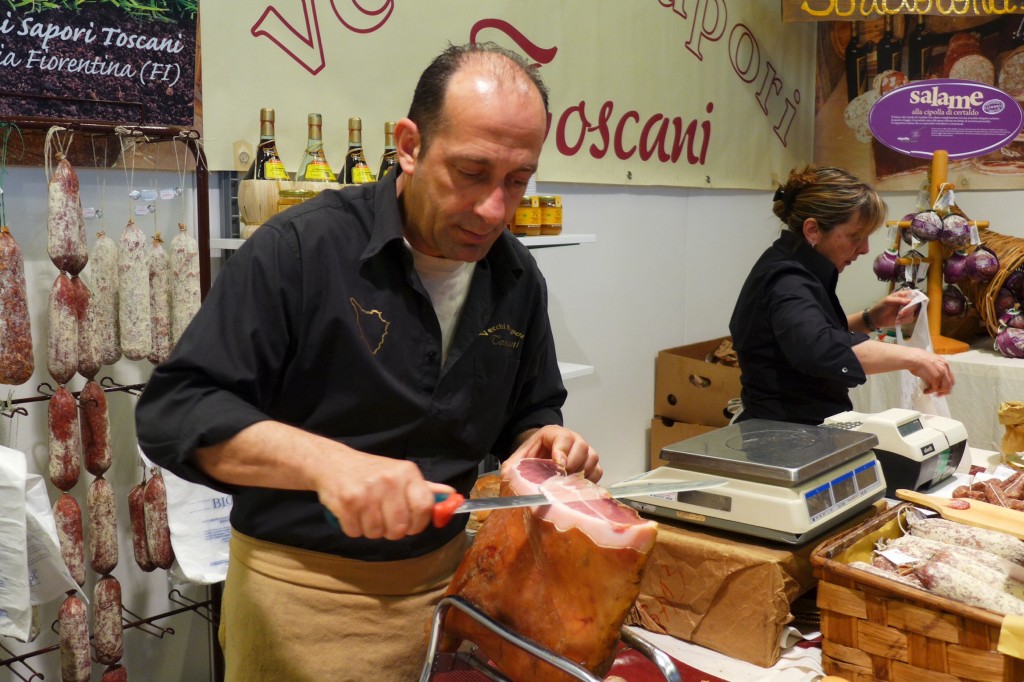 A Tuscan prosciutto producer deftly hand-slicing the air-cured ham with a razor-sharp knife at the artisans expo in Florence. Credit: Nathan Hoyt

Italian artisans have been making air-cured hams as far back as Etruscan times some 3,000 years ago, originally from the haunches of wild boar. Eventually, pigs were bred and pampered specially for producing prosciutto crudo, arguably the finest ham in the world. Regulations for their slaughter and transformation into salumi, cured meats, were in place by 800 A.D. under Charles the Great. Standards were further codified during the Medici reign in the 14th century and remain unchanged today. Note that prosciutto means, simply, “ham.” Prosciutto crudo, “raw ham,” derived from the hind legs of large pigs bred lean, is served uncooked, while prosciutto cotto, “cooked ham,” refers to the boned, brined and steamed thigh of medium-sized swine. 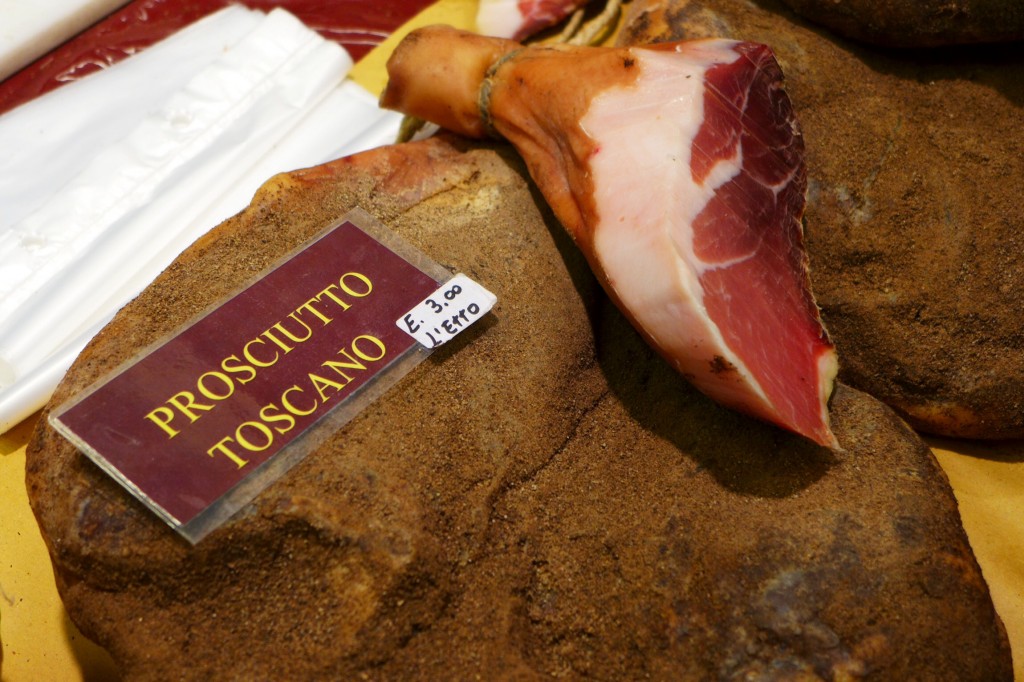 Prosciutto crudo is found throughout Italy’s regions, but local aromatics and taste preferences prevail. Tuscan prosciutto DOP (protected denomination of origin) originated with the ancient traditions of Tuscan farmers who used fennel and other field herbs for flavoring that grew wild in the countryside, along with sea salt for dehydrating and purifying the meat. While the famous hams of Parma and San Daniele, referred to as dolce, “sweet,” due to restrained use of salt in the preservation process, are delicate in flavor and buttery on the tongue (no aromatics at all are used in those hams), Tuscany’s slightly chewier prosciutto crudo, dubbed salato, “salted,” is redolent with juniper, garlic, rosemary, and pepper. Just as the nation’s cooking varies from locality to locality, so do prosciutto-making traditions differ throughout the country. When the hams are ready for eating, they are celebrated during weeklong sagre, food festivals, when the towns are festooned with pig-related decorations and tables are set up in the main piazzas and prosciutterias for eating prosciutto and drinking wine day and night. One of the  most famous sagras is held in San Daniele, Friuli, in August, with music and games in the streets, and a parade of citizens in costume dressed to look like prosciuttos. 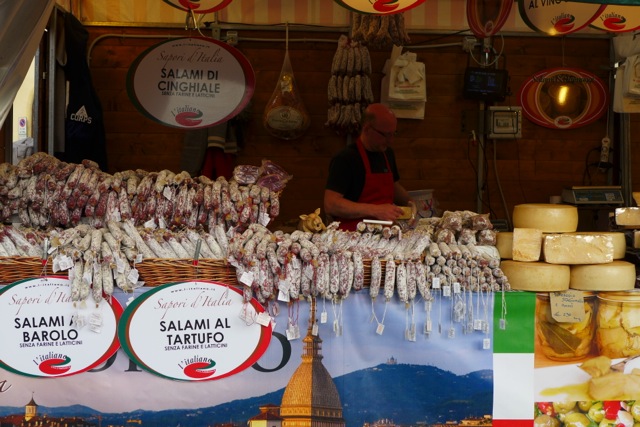 A vendor selling prosciutto, boar salami and salami flavored with Barolo or white truffle from Piedmont at a street market in Florence. Credit: Nathan Hoyt

An Italian emigrant I once knew so longed for the prosciutto his mother made back home in Friuli, that he traveled to his family’s village once a year as soon as the hams were matured to bring one back to America. Knowing his treasure was likely to be sniffed out by dogs at the customs check, he came prepared with a pair of extra-large boots. In one boot, he stuffed a purchased, commercially made, boned prosciutto. In the other, he concealed his mother’s ham. When a customs inspector stopped him at the New York port of entry, he admitted to smuggling a prosciutto, fished the purchased decoy out of his suitcase, and turned it over to the official. Bawling and protesting that his dying mother had made it, he begged to be let off, proffering that he wanted to share it with his relatives in New Jersey at a dinner being planned in her memory. No amount of dramatics ever convinced an official to let him keep it. Each time, the prosciutto he revealed was confiscated and each time, he was able to bring home the real thing. If we have learned anything about the foibles of the human appetite, we know that desire for one’s ancestral foods is rarely discouraged by prohibition. Whether it is candy or salami that first formed our taste memories, our cravings must be satisfied. Another transplanted Italian I know told me he misses the old days when his nonna smuggled Calabrian soppressata in her bra. 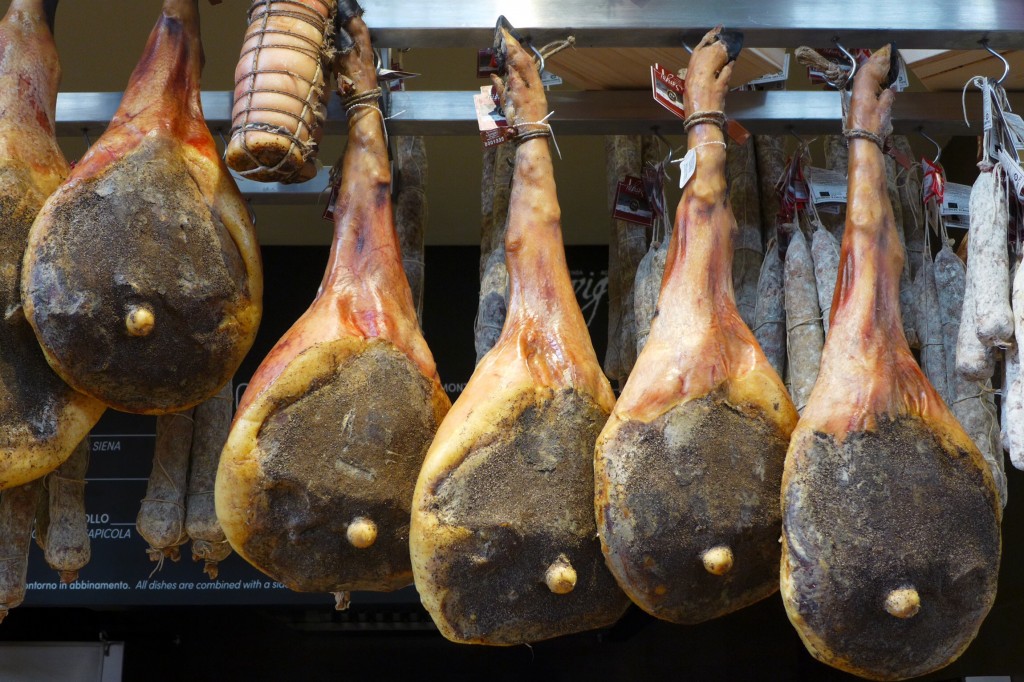 Beginning this month, on May 28th, travelers will no longer have to smuggle Italian cured meats out of Italy. Salumi from Emilia-Romagna, Lombardy, Veneto, and Piedmont, and the provinces of Bolzano and Trento have been cleared by the U.S.D.A. for export. Tuscany’s products are still awaiting official clearance. In the meantime, you may have to travel there to eat prosciutto toscano, boar-meat salumi, or exquisite finocchiona, the region’s fennel-drenched salami. If you’re as bold as my old friend, you might even bring a pair of large boots in your luggage and bring some back home. 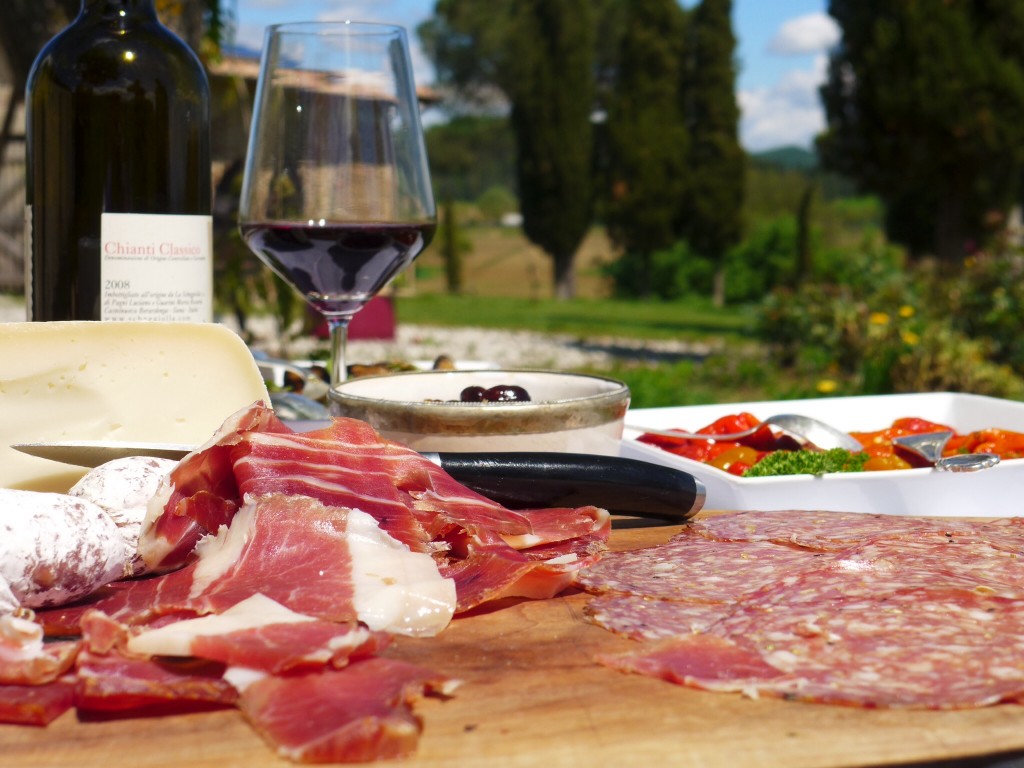 Sacha Destefanis and Giuseppe Mangiarotti run cooking classes and wine tours (A Table in Tuscany) from their beautiful Cetona villa. On a recent afternoon, they served the local Tuscan prosciutto crudo and finocchiona with the region’s Chianti Classico.  Credit: Nathan Hoyt

What to drink with Tuscan salumi: Wines made from Sangiovese vines such as the rich, archetypal Chiantis from the eight distinct zones that carpet Tuscany’s central hills are a traditional accompaniment in the region.

9 Responses to “A 3,000-Year Tradition Makes for Sublime Italian Prosciutto”