Almost in the very middle of this little sea, enclosed between the water and the sky, lies Venice, a fairy vision, risen as if by miracle out of the water that surrounds it and like green shining ribbons, cuts through its beautiful body.

The Eolo plies the waters of the Venetian lagoon. | Photo: Nevio Doz

So wrote Giulio Lorenzetti, in his famous 1926 guidebook, Venice and its Lagoon: A Historical and Artistic Guide (updated in 1994 and still the most authoritative guide). Yet there it is, the ancient “Serenissima,” a glittering city decorated with gold, arising out of the lagoon, firm and fixed. We can barely grasp how architects could have imagined its plan and how century after century, its stones were put into place. 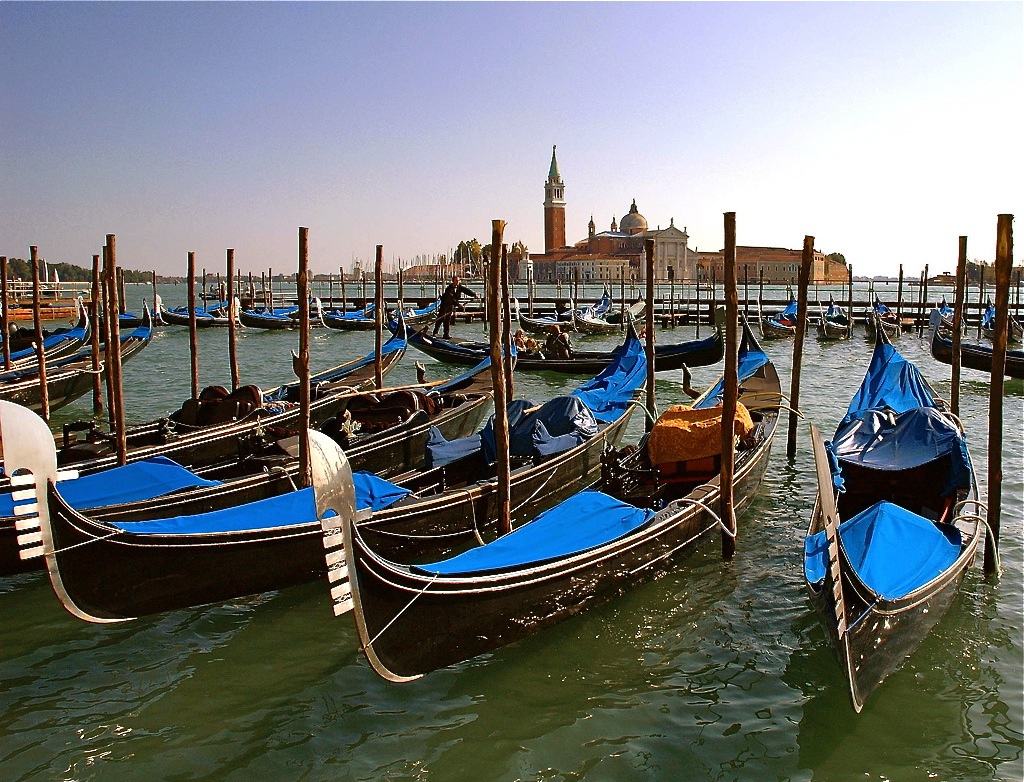 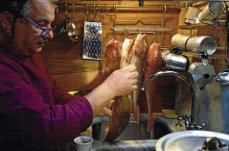 Venice was born in the lagoon, though to outsiders, it seems somehow completely separate from it. To really experience la Serenissima, the ancient city of waterways and light, you must ply its inland sea and visit its tiny islands (there are 30 of them, and 150 canals in the archipelago). You need to go beyond the tourist route to find the bustling life of true Venetians that is hidden from the view of foreigners and to enter a quiet world of history, art, and nature surrounding the spectacle of Venice. What better way to explore the real Venice than alongside a native son with deep roots in the natural world of the lagoon, and with an award-winning American food writer, journalist, storyteller, and one-time sailor who has intimately explored Venice and its cuisine?

Come with me and Mauro Stoppa, a local hero and legendary skipper-chef on a unique three-day journey and see the Venice behind the stage set for an experience of a lifetime. 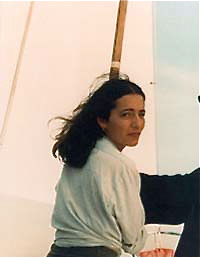 I began my cooking career on a 50-foot sailing ketch.

Sail its secret estuaries on board the Eolo, a flat-bottomed sailing bragozzo constructed to navigate the shallow waters of the lagoon. Built in the nearby port of Choggia in 1946, Mauro has lovingly restored the historic boat and appointed it for the comfort of an intimate group of guests. Be transported for three days on the archipelago’s waterways to the grace and rhythm of another time, far from the tempo of today’s battering pace and the throngs of tourists. Immerse yourself in the natural life of this magical and mysterious place, see its unique flora and fauna, savor its seafood, wild game, and the fresh harvest of the lagoon islands in autumn. Drink the delicious “salty” wine that is made from local grapes kissed by the sea air. 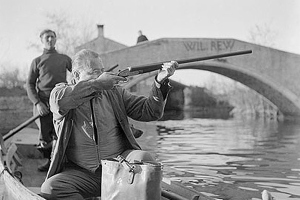 Hemingway decimated the wild duck population on Torcello, where he hunted and wrote in 1948. | Photo: Foto Graziano Aric

Discover nearby islands like Torcello, where Hemingway wrote parts of his Across the River and Into the Trees and hunted; refuge of royalty and international superstars seeking seclusion at Locanda Cipriani, the legendary inn still run by the Cipriani family. Visit Lazzaretto Nuovo with its Bronze Age ruins, where digs over the last 20 years have turned on its head the previously held notion that Venice was settled some 1,500 years ago by mainland tribes fleeing the Longobards. You might stop at Sant’Erasmo, an island of vegetable fields and orchards; or untouristed Chioggia, whose ancient mercato puts the famous Rialto fish market to shame. Afterward, feast on sublime meals from the galley, dreamed up by Mauro using the fresh local bounty of the day. Dine in the best restaurants and stay overnight in the finest hotels in Venice. You’ll never get any closer to the real and enchanting essence of Venice.

Mauro Stoppa, skipper and chef, on board his beloved Eolo. | Photo: Paolo Destefanis 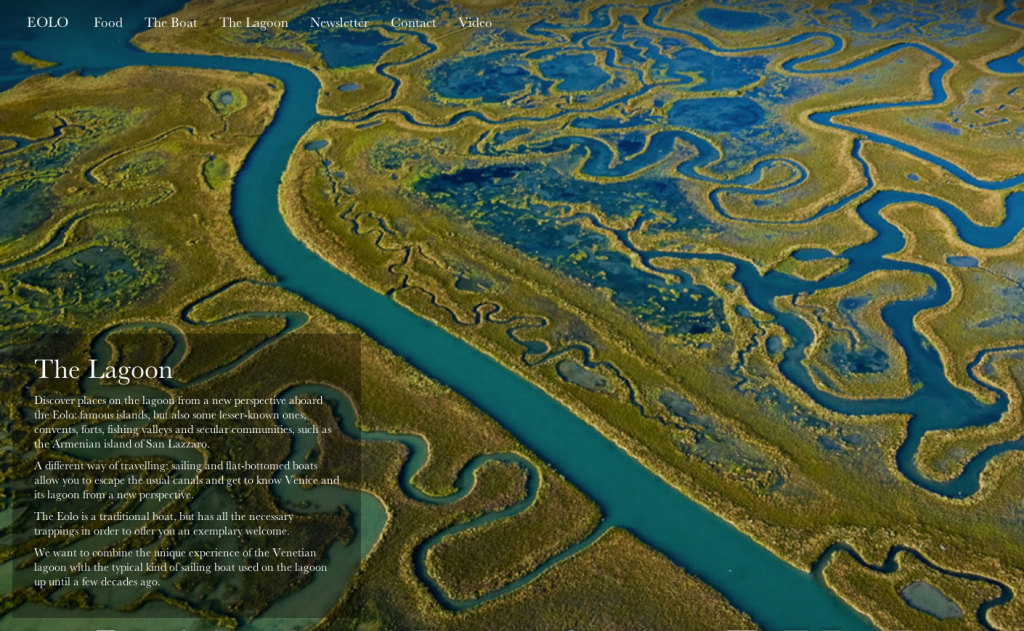 Read about cruises on board the Eolo and view previous excursions for a sample of our upcoming “Venice by Lagoon” culinary-historical tour, on Mauro Stoppa’s new website here.

“September,” Mauro says, “is the best time of year to come to Venice, not too hot and not too cold or rainy. It’s when the island farmers harvest pumpkins, the first radicchio of the season, local cabbages, eggplants, peppers, and the sweetest tomatoes of the year….We have local breeds of figs and plums and an old, sweet white grape variety, ‘Dorona.’ The skin is too delicate to export so it’s only eaten here. We get sea bream with the first storm and different kinds of fish migrate to the open sea that join the main canals between the lagoon and the Adriatic….Also the cuttlefish are ready….It’s open season for wild duck—they have a different taste in autumn, unique.”

“…it’s hard to blame people for getting excited when they eat risotto with sea asparagus—the Venetian “salicornia”—or grouper cooked in peaches with a Byzantine basilica as a backdrop.” —Elisabetta Povoledo, The New York Times

Our first stop, the island of Mazzorbo. | Photo: Paolo Spigariol 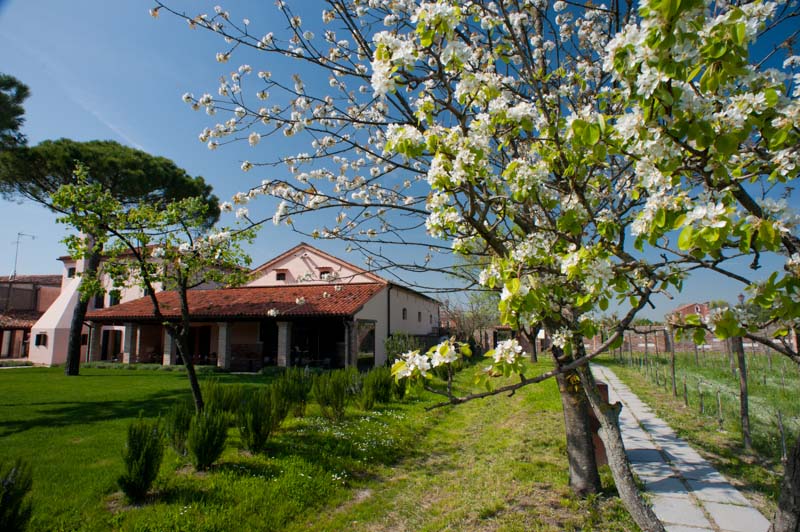 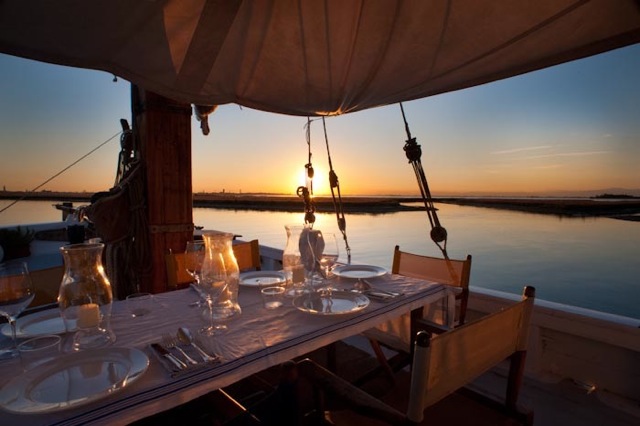 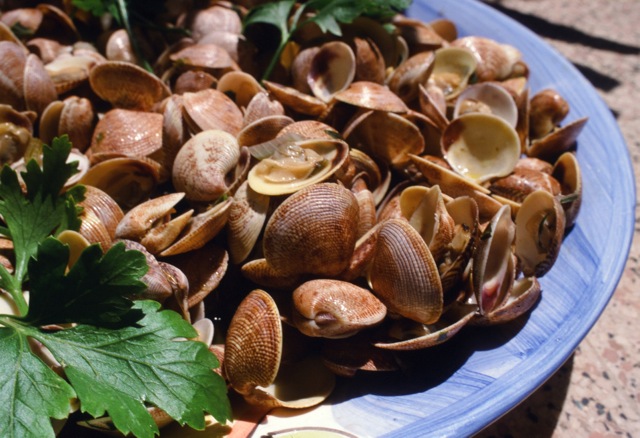 The local catch for lunch on board the Eolo. | Photo: Paolo Destefanis 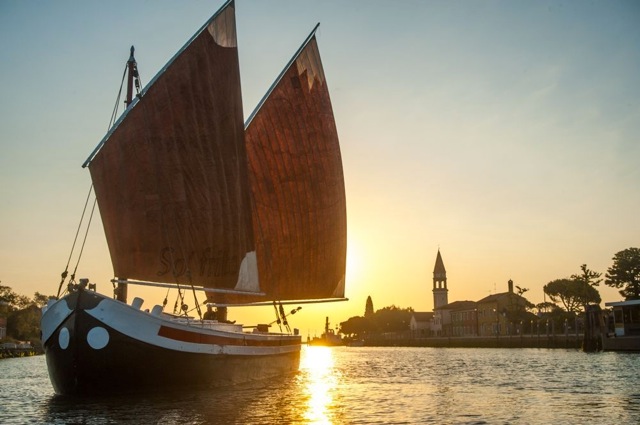 On the Eolo in the middle of nowhere. | Photo: Paolo Spigariol

The fishermen bring us their catch early in the morning. | Photo: Paolo Destefanis 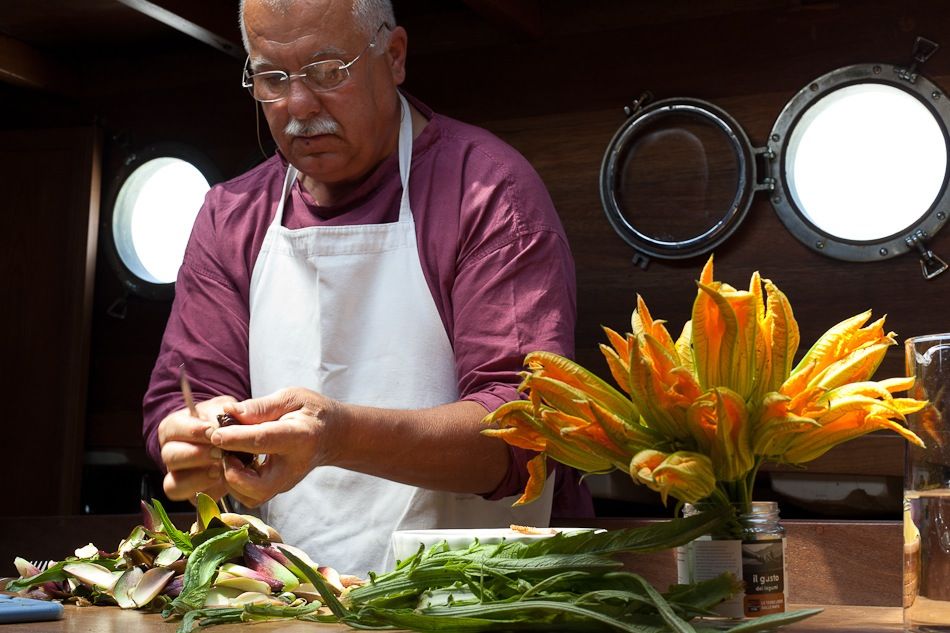 Cooking lesson with Mauro on board the Eolo. | Photo: Paolo Spigariol 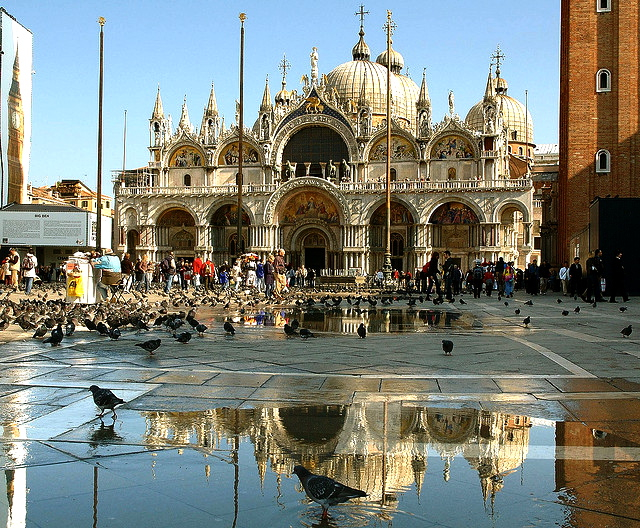 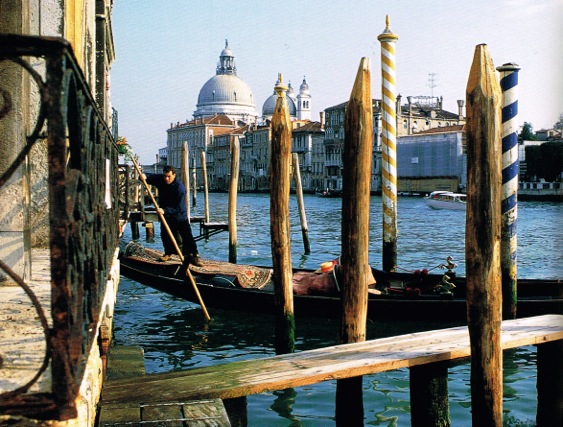 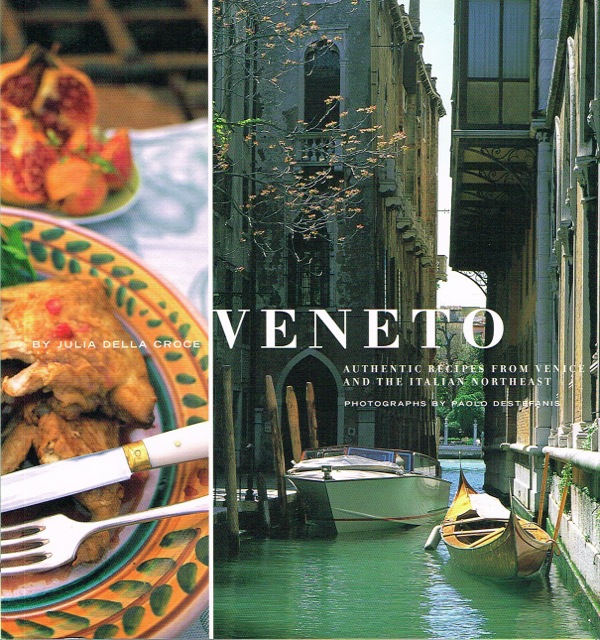 “Everyone knows Venice, but the Venetian cuisine has been somewhat of a hidden treasure. Rich in the use of unique spices left from its Serenissa years, the cuisine sparkles with surprise. Julia della Croce [in her book, Veneto]…has captured wonderfully [its] nuances and sparkle of this regional cuisine.” —Lidia Bastianich

Julia della Croce has been immersed since birth in the tastes and aromas of the Italian cooking she loves. After becoming disenchanted with a political career, she began cooking in the galley of a 50-foot sailing ketch for paying passengers. She is a journalist, and James Beard award-winning cook book author and cooking teacher. Among her thirteen titles, is Veneto: Authentic Recipes from Venice and the Italian Northeast (Chronicle Books), winner of the 2004 Gourmand World Cookbook Awards. She writes about the culture of food and drink for Zester Daily and in this blog, and is a noted authority on the food of Italy.

Mauro Stoppa was born and raised on his family’s farm in a small village near Padua on the southern edge of the Venetian archipelago. He is an agronomist by education but his first love was always the world of the lagoon. In 1998, he pulled up his land roots and bought and restored the Eolo, a vintage bragozzo named after the Greek god of the wind, a flat-bottomed 52-foot fishing barge that is one of the last of its kind. There and then, he decided to fulfill his lifetime dream of living on the sea and to devote himself to the restoration of the Venetian waterways. Stoppa takes small groups on cruises to sail, eat his sublime food, and experience the magic of Venice and the lagoon he loves, a venture featured in the New York Times. 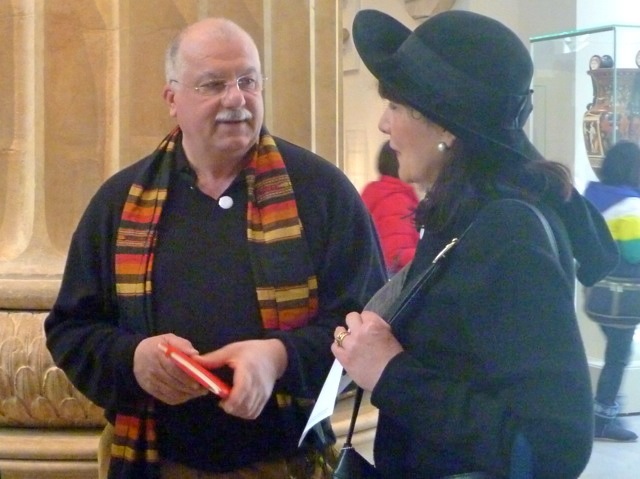 Mauro in NYC to cook for a private party at Sotheby’s, bringing his own ingredients with him from Venice. We met at the Met for some down time. | Photo: Nathan Hoyt

7 Responses to “To Italy with Julia: Venice by Lagoon”