Day 1: Under the Sicilian Sun

Probably there is no better guidebook to the real and the mythical Sicily than Giuseppe Tomasi di Lampedusa’s The Leopard, the powerful historical novel about Sicilian life at the time of the Risorgimento [Review of the book from THE GUARDIAN]. I took it with me on a flight to Palermo last week and as we drove on the coastal road toward Trapani and our hotel, past dark-skinned children playing along the roadside and men with the bluest of eyes, yellow hair and ruddy complexions, I remembered his image of Sicily as the “America of antiquity.” Positioned strategically  on the Strait of Messina between North Africa and mainland Italy, the island, the largest in the Mediterranean, was an easy stepping stone for marauders, invaders, and fortune-seekers. This is where Greeks, Phoenicians, Romans, Arabic, Norman, Spanish alternately ruled and plundered for 3,000 years. 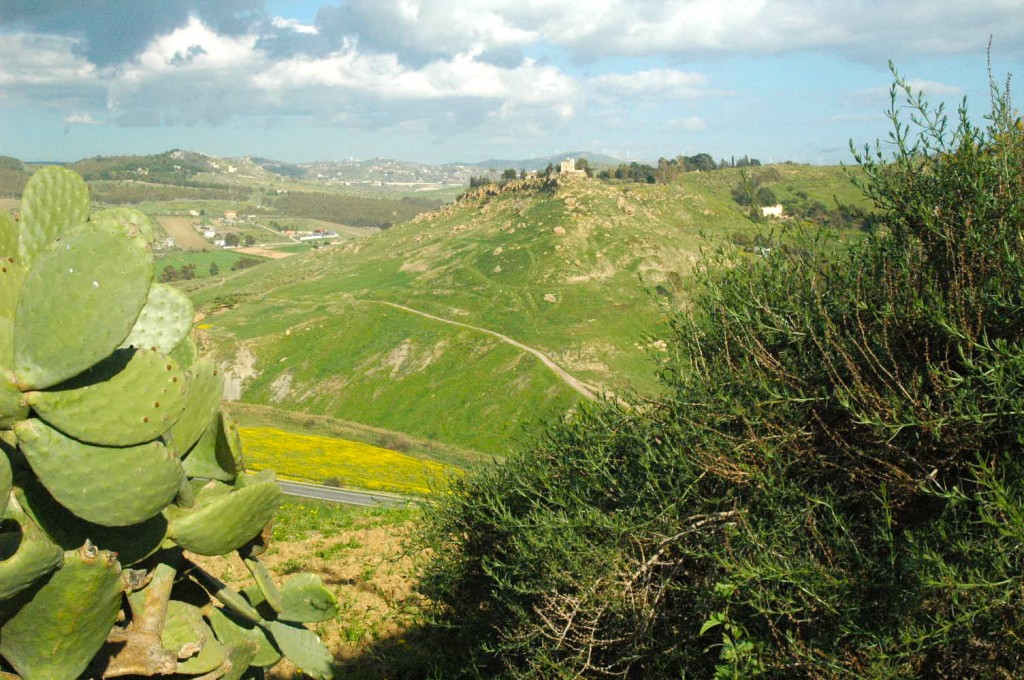 On the road to Trapani

A nation’s food is a living relic of its history. Sicilian food is a banquet of all its historical layers, flavored also by Africans and Europeans. I came to the island’s northwestern Trapani province for an agricultural exhibit of provincial wines, olive oils, pistachios, almonds, herbs, preserves and confections, an exposition sponsored by the local Chamber of Commerce. I wanted to taste the fruit of the year’s harvest and talk first-hand to the artisans–olive oil producers, vintners, pasta makers, Pantelleria caper farmers, to name  few–whose singularly local ancestral crafts form the backbone of the region’s legendary kitchens. And since Trapani has been the tuna-fishing center of Italy since Phoenician times, I couldn’t pass up an opportunity to savor some of the best tuna in the world. Insights from the artisans who make Trapani’s celebrated foods–and some of their recipes–will follow in single-subject entries as this journal unfolds…

At the hotel, Tonnara di Bonagia, on the site of an ancient tuna fishery, the first taste of Trapani awaited us in our room: a plate of milky mozzarella and cigliegini (“little cherries”), astonishingly sweet local cherry tomatoes, and a basket filled with delicious bread baked from heritage wheat, which Sicilian farmers are making a concerted effort to revive.

And what a delight it was after the styrofoam-variety rolls we are faced with in Italian hotels these days. As for the cheese, this was not the not the true water buffalo mozzarella native to  the Naples area–ideally, that luscious fresh cheese (not actually a cheese since it is not subjected to fermentation) should be eaten within two hours of making, as any mozzarella di bufala maker would tell you. This tangy, charming version was probably a sheep’s milk variation, and hand-formed like little dumplings. Along with these simple but satisfying offerings came a full bottle of fragrant and flavorful Trapanese olive oil, implying that one shouldn’t skimp with it.  I poured it lavishly over all, as was intended. Washed down with the local Erice Nero D’Avola DOC house wine it was as good a meal as I’d ever want.

2 Responses to “The Trail to Trapani”