Carnevale, the gaudy week-long party that erupts in February all over Italy has its roots in the Roman festival that honored the pagan god Saturn. No effigies of saints or madonnas here: Carnevale is a farewell to winter and banishment of the dreary; a delirious celebration of spring and all things delicious, coveted, and forbidden.  Every indulgence is permitted and tradition calls for eating mountains of meat and sausages, rivers of wine, and sweets, sweets, sweets.  Each region, town, village, has its festival foods.  Naples is devoted to lasagne, Ivrea (Piemonte) to fagiolata (bean and pork stew). Tossignano (Emilia-Romagna) bakes polenta and ragù. Verona exalts potato gnocchi. 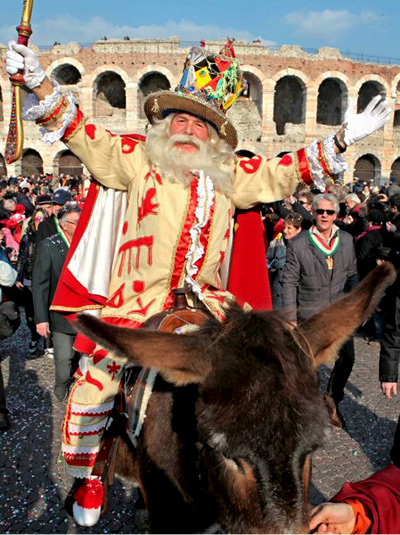 Papà del Gnocco on his donkey.

The last great party of the year, Venerdì Gnoccolare (“Gnocchi Friday”), erupts on the last Friday of carnival week. Its titular head is Il Papà del Gnocco—the “Father of Gnocchi,” a gnome-like “gnocchi king” elected every year to head the procession and spend the rest of his term doing civic deeds as befits any royal.

Astraddle a donkey and wearing a red and white costume symbolizing the colors of gnocchi and meat sauce (pastissada), he leads a raucous  procession of extravagant floats, bands, minstrels, acrobats on stilts, costumed riders on horseback and merry-makers to Piazza San Zeno for a gnocchi pig-out. Also served are polenta and sausages, another favorite local specialty.

For those not familiar with Verona history, Piazza San Zeno is the same town square where the Goth king, Theodoric, defeated barbarian armies in battle in A.D. 489, winning for Verona its sovereignty. The king gave the townspeople the legions of slain horses, which they quickly butchered and marinated in wine and aromatics for many days.  The result was pastissada, a ragù of horsemeat (make it with beef, buffalo or venison), carrots, abundant onion, cloves, and the beautiful Valpolicella wine of Verona. How to describe the sauce? As the Veronese would say, “Veronesissimi”—very, very Veronese!  As for the gnocchi, so passionate are the people of Verona for the potato dumplings that they have coined a word for the aftereffects of eating too much of it: GNOCCOLONITÀ.

It is impossible to give an exact recipe for potato gnocchi because the amount of flour needed depends on the moisture content of the potatoes, but there is one hard and fast rule: the less flour, the lighter the gnocchi. Because the ideal is to introduce as little flour as possible, the potatoes should be cooked in their skins. To mash the potatoes after cooking, use a potato ricer.  A hand-masher or fork does not remove lumps, while a food processor makes cooked potatoes gluey.

1.  Place the potatoes in the top insert of a steamer; fill the bottom pot with water. Bring to a boil. Cook the potatoes until completely tender, using a skewer or fork to test for doneness. While the potatoes are cooking, line three baking sheets with clean kitchen towels; set aside.

2.  Have ready a slotted spoon, a large, wide colander positioned over a pan, or a slotted broiler tray, and a large wide, shallow serving dish in which to transfer the gnocchi once they’ve drained.  Smear it with a little of the sauce you will be using and keep it warm.  Fill a large kettle three-quarters full of water (about 5 quarts), cover, and bring to a rapid boil.

3.  When the potatoes are cool enough to handle but still warm, peel them, using a paring knife to lift off their skins.  The potatoes must still be warm when combined with the flour.  Pass the potatoes through a ricer directly into a large bowl. Add the egg, salt, and pepper. Turn the mixture out onto an ample, floured work surface.

4.  Incorporate the flour into the potatoes, drawing the flour in as you work the mass into a uniform, tender dough.  The amount of flour that will be absorbed will depend on the moisture content of the potatoes, so the flour should be worked in gradually.  It is important not to overwork the dough.  It should be quite soft without being at all sticky.

5.  When a uniform dough is formed, knead it lightly for 5 minutes.  Cut it into eight equal parts.  Work with one piece of the dough at a time.  Keep the remaining dough covered with an inverted bowl until you are ready to use
6.  Using your hands, roll the dough into a rope about 3/4-inch thick.  (For smaller gnocchi, called gnocchetti, roll the dough 1/2-inch thick.)  Cut the rope into approximate 3/4-inch pieces; 1/2-inch pieces for gnocchetti.  Using the side of a grater, or a ridged wooden butter paddle, take each little piece one at a time and holding it between your thumb and your forefinger, drag it along the face of the grater with the medium-sized holes (the same side of the grater that would be used for grating hard cheese), pushing your thumb into it as you do so.  A hollow, concave dumpling will result (the hollow formed in the center makes them light and allows the gnocchi to cook evenly throughout).  Transfer the finished gnocchi to the prepared cloth-lined baking sheets, arranging them in a single layer without touching.  Approximately the same quantity of gnocchi< should be placed on each sheet.  If the dough becomes a little sticky as you work with it (this is bound to happen with succeeding batches), sprinkle the ropes and the grater or paddle lightly with flour.  If the dough is too sticky altogether, form it into a ball again and knead in only as much flour as necessary to prevent the stickiness.  Finish making the rest of the gnocchi with the dough that is left.
7.  To cook the gnocchi, pick up one of the cloths holding a third of the gnocchi, grabbing two corners in each hand, and tip and slide the gnocchi directly into the rapidly boiling water.  Immediately add 2 tablespoons of salt and using a long-handled wooden spoon, stir immediately.  As soon as the gnocchi float to the surface, scoop them out with the slotted spoon and transfer them to an ample serving platter. Spread them out to prevent them from clinging together.

8.  When all the gnocchi have cooked, spoon the pastissada sauce over the gnocchi and scatter the grated cheese lightly over the top.  Serve immediately.

Ahead-of-time note:  Once formed, the baking sheets full of gnocchi can be covered with foil or waxed paper and refrigerated for up to 3 hours.  For longer storage, freeze the gnocchi on their trays. Once frozen, the gnocchi can be tranferred to a plastic bag or container and frozen for up to 1 month.  To cook, drop frozen gnocchi directly into boiling salted water; cook until they float to the surface and serve as directed above.

>> A useful video on how to shape gnocchi can be found on YouTube . Watch from minute 8’30.
Pastissada Meat Sauce / pastissada de caval
For 4 people
Copyright Veneto: Authentic Recipes from Venice and the Italian Northeast, by Julia della Croce (Chronicle Books, 2002) 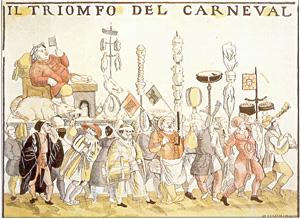 There are many of ways of making this famous dish. An old recipe I came across called for sixteen or more hours of gentle cooking. Others prescribe cooking only as long as necessary for the meat to become tender and marry with the other flavors, about one and a half hours. This version is essentially a ragù, while in other recipes, the meat is cooked whole, then shredded into the sauce after cooking. Pastissada is typically served with potato gnocchi in Verona, where it shares the status of dish of honor with potato gnocchi at Venerdì Gnoccolare. In Verona, pastissada is fortified with the local Valpolicella, or in a richer version, with Amarone (red). Just as often, pastissada tops polenta, either in its loose form or grilled.

In a large saucepan, warm the butter with the oil over medium-low heat. When it is hot, add the pancetta or salt pork and sauté until golden, 7 to 9 minutes. Add the garlic, onion, carrot, celery, bay leaf, coriander, and cloves and sauté over low heat until the vegetables are well softened, 12 to 15 minutes. Add the ground meat and the giblets, using a wooden spoon to break them up. Turn the meats over to brown evenly, cooking until it is lightly colored, 5 to 7 minutes. Now add the wine and allow the alcohol to evaporate, about 3 minutes. Stir in the tomato paste and sauté gently for 2 to 3 minutes, then add the chopped tomatoes and salt. Cover partially and simmer over low heat, stirring occasionally, until the sauce thickens and is aromatic, about 1 ½ hours. If it seems to be drying out, add a few tablespoons of water to moisten. Remove the bay leaf.
Serve with freshly made potato gnocchi, or over loose, hot polenta in a large, shallow serving dish. Eat at once!