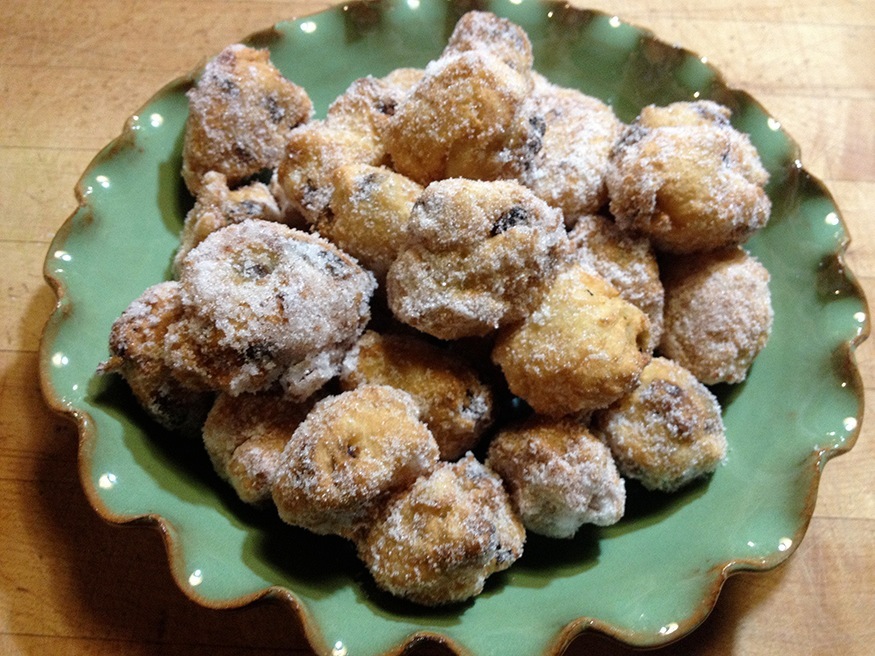 My grandfather was named Giuseppe, so this day held special meaning for us. Like other Italians, we celebrated with treats made only for this day, typically bigné (fried eclair with filled with pastry cream), zeppole and a myriad of other fried pastries. The most significant of these were always the frittelle di San Giuseppe, sweet rice fritters.

Of course, there are endless variations throughout the southern Italian regions, particularly in Puglia, Sicily, Abruzzo and Campania, where the tradition of frittelle di San Giuseppe is strongest, but my grandmother’s were based on a sweet rice dough and redolent with aromatics and vanilla. I hadn’t eaten them for years when my friend, Michael LaPlaca, surprised me on a recent visit to his house with a platter piled high with frittelle di carnevale “carnival sweets.” Even though they were studded with raisins, they smelled and tasted so much like my grandmother’s fritters that we whipped up a batch of them today.

In the lore of my grandmother’s native Bari, eating  frittelle on this day is thought to bring happiness, so in an immigrant family with eleven children, they were made — and eaten — in large quantities. We modern people worry a lot about fried foods and too many desserts, but go ahead and chase those leftovers of my superb Irish beef and Guinness stew with some of these sweet mouthfuls and make yourself happy, too, on St. Joseph’s Day. 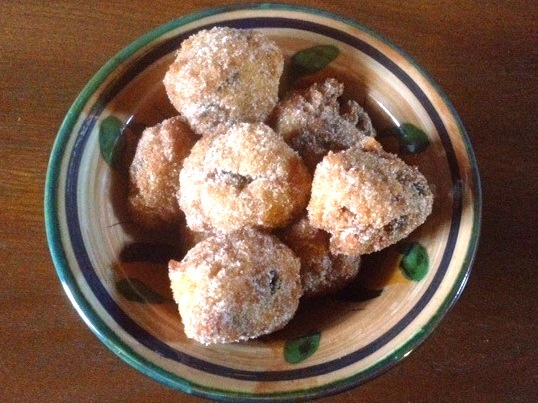 The inspiration for these frittelle comes from a little pastry shop in Perugia near Tre Archi, a short drive from my friend Michael’s palazzo in Bettona. “The first one was so good that I had to have another and ended up taking the last three home,” he told me. “I asked the owner if I could possibly get the recipe and he told me to come in when his mother was there.” Michael went back on the appointed day and spoke with the signora. While she gladly told him how she made them, the “recipe” was predictably sketchy. “Make the rice the night before and put it in the refrigerator. Then add sugar, flour, raisins, and one egg,” is all she said. Not to be deterred, he went home and experimented until he got them just right. These are delicious, a proper offering to St. Joseph, or any Joseph, or just a delicious treat for anyone, anytime, as far as I’m concerned. As every baker knows, it is always best to weigh rather than measure out ingredients, like the Europeans do, thus the quantities called for are stated in grams.

1. Several hours or the day before you plan to make the frittelle, combine the rice, the water, and 1/2 teaspoon salt in a saucepan. Cover tightly and cook over medium-low heat until all the water is absorbed and the rice is tender but not overcooked. If necessary, add a little more hot water and replace the cover. When it is done, cool thoroughly or refrigerate it overnight.

2. Before you begin to make the frittelle, bring the rice to room temperature. In the meantime, soak the raisins or sultanas in the liquor. When they are plump, squeeze out excess liquor and strain.

3. Put the cooled rice in an ample mixing bowl. Mix in the 50 grams sugar, vanilla, egg, drained raisins or sultanas, and enough of the flour to form a mixture that holds together but is neither runny nor too sticky.

4. Take two shallow soup bowls. Fill one with a cup of flour and the other with 1/2 cup of white sugar into which you have blended the cinnamon.

5. Select a deep pot for frying to prevent oil from splattering. Pour enough oil to reach 3 inches up the sides of the pan and set the flame on medium heat.

6. Set a baking sheet on your work space. Line a second baking sheet with paper towels and place it next to the stove. Select a large serving platter and set it aside.

7. Form the frittelle by scooping up a rounded teaspoon of the mixture at a time and with the help of a second teaspoon, form it into a ball (the dough is too sticky to use your hands for shape it). Transfer each formed ball to the unlined baking sheet until you have formed them all. Working with only as many as you can fry at a time, dredge the balls in the flour. (Keep in mind that if the rice balls are are dredged in flour and left to sit for even few minutes, the coating will become soggy and the frittelle will not be as crisp as they should be.)

8. When the oil is hot enough to make a rice ball sizzle upon contact, slip several rice balls in at a time. Do not crowd the skillet. There should be enough room around each to allow quick and even cooking. Fry the rice balls, turning them once, until cooked through and nicely browned on both sides, 5-7 minutes. If longer, they’ll be something for San Pietro, says Michael. Using a wire skimmer or “spider,” lift out the fritters one at a time and transfer to the other baking sheet lined with paper towels to drain.

9. While the fritters are still hot, roll them in the cinnamon-sugar mixture a few at a time, coating them well before they cool. Transfer them to the serving platter. Repeat the process with the remaining fritters. Serve warm or at room temperature.

4 Responses to “The Italian Answer to St. Patrick’s Day is St. Joseph’s, the Gorging Holiday”